Container industry fallout from coronavirus to linger into 2021

Container industry fallout from coronavirus to linger into 2021 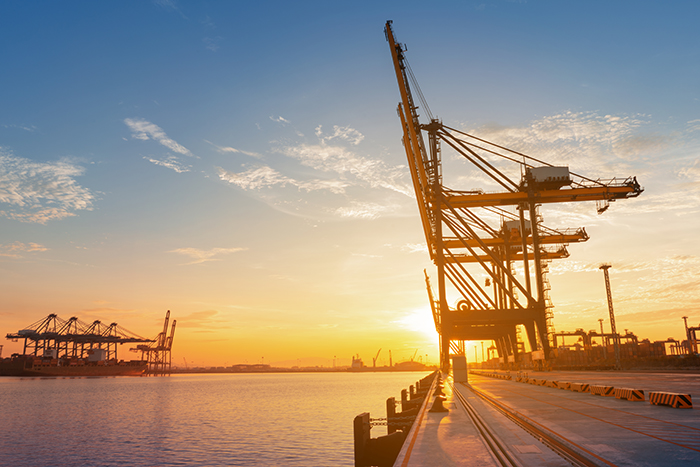 Between March 20 and March 27, IHS Markit lowered its projection for 2020 US real gross domestic product (GDP) growth from a decline of 1.7 percent to a decline of 5.4 percent. Photo credit: Shutterstock.com.

As participants in the international supply chain grapple with the impact of the coronavirus disease 2019 (COVID-19) crisis on short-term container logistics, it is becoming increasingly clear that the broader impact is growing rapidly and will be felt for the year ahead, if not beyond.

In other words, even as undeliverable goods begin piling up at US ports, concern is emerging that what was originally predicted to be a V-shaped recovery and then, more soberly, a U-shaped recovery could morph into a dreaded L-shape trajectory, with a much longer timeline and far fewer historical corollaries.

A slowing down en masse of ocean shipments has materialized rapidly, with container lines offering shippers longer transit time options and shippers, forwarders, and ports all scrambling for space to store loaded containers that can’t be delivered immediately to receivers. That’s raising the possibility of near-term congestion on a national scale, given that all ports are experiencing the same phenomenon simultaneously.

“In ocean, we’re seeing increased demand for storing goods,” said Simon Kaye, president and CEO of Valley Stream, New York-based Jaguar Freight Services. “Our clients and their customers don’t want to take receipt or have their warehouses full, so we’re getting constant requests to store containers out of the port, for how long we don’t know.”

The global air freight market remains highly fluid, Kaye said, with rates changing daily or more frequently. “We have told our clients that, due to the enormous capacity restrictions on air freight, we can no longer give them a firm quote, only a range of what the price might be, and even then it’s a fairly broad range,” he said.

The current logistics challenges are likely temporary, the result of the brakes being slammed on the global economy and the logistics system being incapable of adjusting quickly. However, as the supply chain downshifts to reflect substantially reduced consumer and business demand, questions are naturally being raised about what the rest of 2020 will look like and how 2021 and perhaps beyond could be affected, given the lack of a clear end to restrictions related to the COVID-19 pandemic.

Those reduced expectations are reflected in rapidly changing forecasts for gross domestic product (GDP) growth in 2020. Between March 20 and March 27, IHS Markit economists lowered their projection for 2020 US real GDP growth from a decline of 1.7 percent to a decline of 5.4 percent. They believe world GDP will contract 2.8 percent in 2020. That is nearly twice as severe as the 1.7 percent drop seen during the global financial crisis in 2009. IHS Markit is the parent company of JOC.com.

From his vantage point as a forwarder, Kaye believes that with US unemployment, which was at 3.5 percent in February, possibly skyrocketing to 20 percent or more, according to some estimates, demand for “non-essential” retail goods will suffer a severe hit.

“Now the reality is sinking in and [customers] are seeing launches being pushed off, orders being canceled,” he said. “Anyone in retail or selling into retail is going to be decimated.”

For container carriers, the rapidly diminishing outlook is not nearly so bleak, at least not yet. However, the impact will be greater for some carriers than for others, given the wide disparity in debt levels, cost structures, and degrees to which they can rely on government support in a pinch. They are benefiting from oil prices that have fallen 65 percent as of April 1, compared with early January, and a newfound ability, never before manifested in container shipping, to quickly withdraw large amounts of capacity in response to a sudden drop in demand, which they did following the extended shutdown of China’s manufacturing sector during the first quarter of the year.

That’s why carriers may be less concerned as COVID-19 begins to eat away at the global economy. “There is only minor price pressure at this point; pricing is better now than it has been for a long time,” Jefferies analyst David Kerstens said in late March. Spot rates measured by the Shanghai Containerized Freight Index (SCFI) “are now at a five-year high, and 8 percent higher on average than a year ago. Prices have held up really well, which is a function of the bunker surcharge and unprecedented idling of capacity.”

While that will help carriers headed into annual trans-Pacific service negotiations, the amount of capacity already idled this year — and the almost certain acceleration of this trend in the coming months — beg the question: How will the situation affect service deliverables? Shippers contract on the basis of service commitments from carriers, and if the carriers can’t assure predictable service, it could call traditional contracting into question.

“The carriers are blanking large amounts of capacity to prevent a catastrophic drop in rates, but at the same time if 20 to 30 percent of your capacity is not deployed, even though the rate [impact] might not be too bad, it’s entirely up in the air what is the actual services [the customer] is buying,” said Sea-Intelligence Maritime Consulting CEO Lars Jensen.