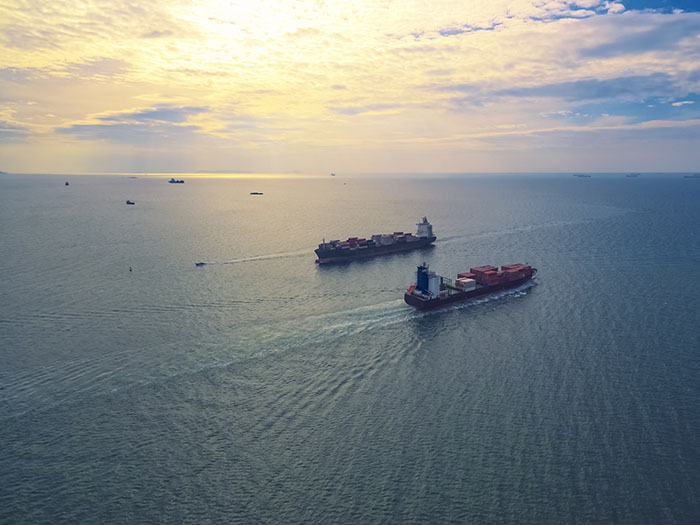 Diverging carrier strategies could have an impact on customers as firms look to differentiate themselves in a largely commoditized market. Photo credit: Shutterstock.com.

When 10 out of the top 20 major container carriers over the past four years ceased to exist as independent entities, or entirely in the case of Hanjin, there was little question the conservative container shipping industry would change. Less clear was exactly how. Now that’s coming into focus, and it’s not playing out as some thought.

The knee-jerk reaction of some, including shippers’ associations, that consolidation would witness an Economics 101 scenario where consolidation reduces competition and raises prices isn’t coming to pass, at least not yet. Some analysts say they have observed more discipline around pricing over the past year, but that was due to the surge of trans-Pacific eastbound cargo triggered by the threatened US tariffs on China.

A case could be made that greater capacity discipline was in evidence last year among carriers in terms of deployments and new orders, of which there have been relatively few. The orderbook as a percentage of the existing fleet shunk from 60 percent to just over 10 percent during the past decade. In the trans-Pacific, carriers last year withdrew capacity midyear and were rewarded with the highest eastbound spot rates in five years. The carriers responded cautiously to the heavy demand by deploying a meager 19 extra loaders to the West Coast and 10 to the East Coast during the fourth quarter.

But the real impact of consolidation is how carrier strategies are changing and diverging. How could this impact customers? Instead of seeing the opportunity from consolidation mainly in terms of the market, carriers see a more ambitious opening to break free of the drift toward commoditization, creating value for customers with the idea of being compensated above and beyond market-driven rate levels.

For an industry routinely described as providing a commodity service, that’s either foolhardy or visionary, but either way it’s ambitious.

Carriers attempting to differentiate themselves isn’t new, but their success has been limited. They all faced similar challenges, tended to act in alignment with each other in areas such as slow-steaming or mega-ship ordering, and in the end failed to effectively counter the commodity image of their industry. Carriers are now mounting a renewed challenge to that story line and emphasizing that by becoming more vocal about their differences.

Categories of carrier strategy are becoming increasingly apparent. Hapag-Lloyd and Ocean Network Express (ONE) say they will be great at operating a traditional steamship line, proving to customers that quality core ocean carriage services by themselves can create value customers are looking for.

Others, such as Maersk and CMA CGM, believe the future is in creating an end-to-end ocean container supply chain, with Maersk going so far as defining itself as an “integrator” in container logistics akin to FedEx, UPS, or DHL in the parcel or expedited spaces and supporting that by engaging in extensive corporate deal making.

Mediterranean Shipping is investing in inland assets including warehouses, trucks, locomotives, and barges under its Medlog brand, which it says operates now in 53 countries. Cosco Shipping is pursuing an end-to-end vision concentrating initially on its mainland China home market. Other carriers have yet to fully define themselves.

“In the consolidated world of the carriers where we are today, everybody has to figure out how they’re going to create value for their customer. Everybody has to figure out what that niche is because no longer is being a generalized carrier a clear path forward,” said Stuart Sandlin, senior vice president at Hapag-Lloyd (America). “Some carriers believe in creating an integrated supply chain. We don’t. Hapag-Lloyd’s strategy is very clear that we want to be very much focused on quality and driving that component.”

Maersk’s strategy, which involved divesting its energy units to focus solely on logistics, is the most radical. As it is based on the premise of digitizing the supply chain, still an opaque concept to many, including other carriers, it is making competitors uncomfortable.

Maersk’s isn’t the first end-to-end vision by a container carrier — those go back to at least the mid-1980s when CSX tried unsuccessfully to weave together an ocean carrier, railroad, barge line, and third-party logistics provider into a cohesive unit. But in the age of big data, the idea of controlling assets takes on a new meaning in terms of the ability to generate quality data that can be the basis for predictability and flexibility delivered to the customer.

What makes the vision so radical coming from a traditional container line is the idea that control of connected assets can create untapped supply chain value that customers would pay for. The tension is evident between that and the legacy business.

As George Goldman, US president of Zim Integrated Shipping Services, said at the Georgia Foreign Trade Conference on Feb. 4, “I struggle with this value-add tech thing. You have to ask yourself, how do you monetize that? Who is going to pay for it?” That’s the ultimate question.

Global Shipping Outlook: A Sneak Peek at 2021
Port Performance North America: Managing Cargo Flow During a Pandemic — and Beyond
END_OF_DOCUMENT_TOKEN_TO_BE_REPLACED