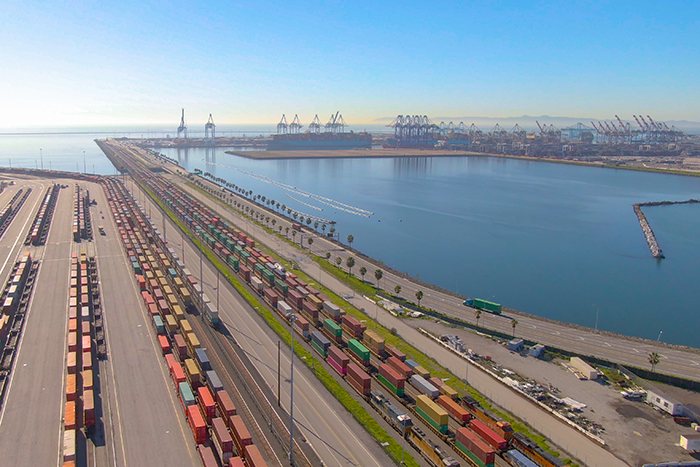 Five years after consulting firm McKinsey & Co. highlighted the potential for ocean carrier alliances to cooperate on landside operations, the container shipping industry has inched closer toward that vision, and the current environment is ripe for a leap forward.

Developments over the last five years have created an environment for closer alliance cooperation, in which, as envisioned by McKinsey, carrier members would coordinate intermodal rail and trucking transport as a single entity. Since the release of the McKinsey report, the number of major carriers has been cut in half, reducing complexity, and the industry’s use of and investment in capturing and analyzing port data to make better planning decisions has increased, according to Ron Widdows, a co-author of the McKinsey report and former CEO of container line APL.

As alliance members build trust among themselves and cooperate better in managing ocean capacity, they are looking more to landside operations. HMM, for example, has switched its western US rail business to Union Pacific Railroad, so that it can gain efficiencies by sharing the same rail operator as fellow THE Alliance members Hapag-Lloyd and Ocean Network Express. BNSF Railway has been HMM’s primary western US rail provider for more than three decades.

Maersk Line and Mediterranean Shipping Co. are now offering premium services to slow or speed delivery on the port side, rather than sailing faster. Maersk this month said it will now offer such services at the ports of Durban, Barcelona, Felixstowe (UK), and Lázaro Cárdenas after the service began in Long Beach last year.

Carriers able to mount expedited services will do better in the long run, as demand from customers to “get things to market quick” remains niche but will grow over time, Widdows told JOC Uncharted in June.

Yet, the industry still has much farther to go to realize the efficiency highlighted by the report, said Steve Saxon, a co-author and partner at McKinsey & Co. Shanghai. McKinsey estimated that an average alliance member could save $100 million annually on US landside logistics, and Saxon says that while the calculations haven’t been updated since the report was written, there’s little reason to believe that figure has changed significantly.

“We’ve seen some of the alliances starting to negotiate some terminal deals together. We’ve seen some of the sharing of the rail services. But I think the idea of truly coordinating all your landside operations together is still not realized,” said Saxon. “We hear there are some alliances that continue to pursue the opportunities … and one in particular is continuing to look at ways to cooperate on the land side.”

China’s decision in 2014 to reject the proposed P3 Alliance of Maersk, MSC, and CMA CGM, then the three largest carriers in the world by capacity, diminished willingness among alliance members to cooperate, as it sent a signal to some that they won’t be permitted to cooperate too closely, Saxon said. Since then, carriers have consolidated and the alliances have restructured, further undermining member confidence in their long-term viability, he said.

“Before you start to work together closely on the landside, you need to believe that you’re in a long-term, stable partnership,” Saxon said. “I think we are getting there now. The alliances are relatively stable, and they are finding value in working together on the capacity-planning side.”

In the last five years, alliances have had a better handle on volume demand, Saxon said, but forecasting is still far from perfect. Improved data and better sharing of data are key to improving that visibility into future demand so landside services can be adjusted accordingly, said Widdows, now CEO of FlexiVan Leasing,

“There’s still a hesitancy to share information. And there’s still this notion that somehow, some way, ‘I’m at some disadvantage of people knowing exactly what I’m doing and where,’ but that’s changed as [carriers] have begun to recognize that it works to their advantage to improve planning execution,” he said.

There is bound to be some feeling among carriers’ surface transportation providers, and even shippers, that increased alliance member cooperation on the land side equates to anticompetitive behavior. But those concerns miss the fact that carriers can only cooperate on operations, not pricing. New language encouraged by the US Congress and now a staple of major vessel-sharing agreements forbids alliance members from jointly contracting with third parties, whether that’s a tugboat provider or drayage company.

“If all the ships were ‘gray’ and you arranged ship calls by terminal for what was the most efficient to support flow, it wouldn’t necessarily look the way it looks today, so that’s an opportunity,” Widdows said. “Where ships call, how you balance in and out flow, how you manage resource allocation and operating on a multichannel footprint, how you build trains, how you flow to the railroads, how you manage truck assets — all of those things don’t really have anything to do with contracted pricing arrangements.”