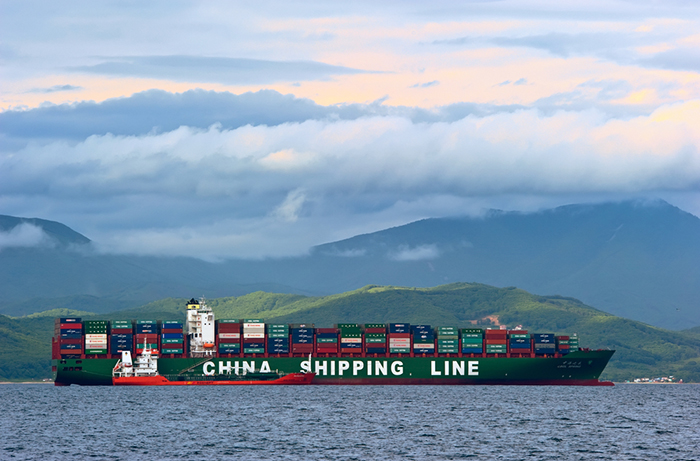 The merger of China Shipping Container Line with Cosco to form China Cosco Shipping was just one of several major consolidations in recent years.

When 2018 rolls around, the container shipping industry will be concentrated among six large global carriers that will be leading the three mega alliances — Maersk, Mediterranean Shipping Co., CMA CGM, China Cosco Shipping, Hapag-Lloyd, and the new Japanese carrier formed from the merged NYK Line, MOL and “K” Line.

This concentration was good news, Goldman Sachs Research said in a note pointing out that the Japanese merger of their liner divisions was the fifth significant consolidation event this year. The bank said this confirmed its view that the container shipping sector's extreme financial stress this year was catalyzing meaningful market repair.

When measured using the Herfindahl–Hirschman Index, a commonly accepted measure of market concentration, Goldman found that after the mergers this year, the HHI had risen from around 700 points in 2015 to 1,100 points. A market with an HHI of between 1,500 and 2,500 points is regarded as being moderately concentrated, and one in which the HHI is in excess of 2,500 points is highly concentrated.

“As carriers focus on better utilizing existing industry capacity, we believe new ship orders will remain low, creating the conditions for supply and demand to begin to rebalance,” the Goldman note said.

Steve Saxon, partner at McKinsey’s Shanghai office, said at JOC.com’s recent TPM Asia conference that there was a correlation between market concentration and industry profitability. He said market share of the top three container lines had increased from around 27 percent to 36 percent during the past 10 years as the industry consolidated with an earnings before interest and taxes of around 2 percent.

In a chart Saxon presented, the effects of concentration on profitability could be seen clearly in the international express industry, where the top three players had an almost 90 percent share of the market and an EBIT margin of just under 10 percent.

But there is debate about whether container industry concentration will on its own result in higher rates. Some believe that fewer carriers means fewer salespeople empowered to cut rates and more responsible ordering, deployment, and idling of ships. Others say industry fundamentals remain intact, where carriers, no matter how few of them there are, will always seek to fill ships given the primacy of cash flow as a day-to-day objective of carriers.

Drewry’s latest Container Forecaster reports that the average size of vessel on the Asia-North Europe trade is now nearly as big as Maersk’s 18,000-TEU E-class units at 14,600 TEUs, and there are now only seven sub-10,000-TEU ships left on the route. The analyst said by the end of 2017, another 600,000 TEUs of ships greater than 18,000 TEUs are scheduled for delivery, with 1.3 million TEUs in total due before 2020.

In a low demand-high overcapacity environment, the pressure to fill these ships is enormous, leading to profitability-destroying rate wars between the carriers.

While announcing Maersk Line’s third quarter results, CEO Soren Skou said the liner division was the main reason for a group-wide loss of $116 million. “This is entirely driven by lower freight rates that were down 16 percent compared to the same quarter last year,” he said.

In fact with the Japanese

Permalink Submitted by ferrullig@minds... on Nov 4, 2016 11:43AM EDT
In fact with the Japanese merge, the new top ten will have 72.5% of the capacity, the next ten will have 9.8% collectively, so concentration is here. And with the announced new vessels being delivered in the next two plus years this top ten will grow and the rest will shrink in relative terms. The issues then will be the management of capacity (always is) and the role of governments in trade. With China and Taiwan having direct interests, Japan, Germany, "Middle East", having indirect interests and Japan having more than a passing interest, how will these carriers act in protecting "local markets" vs. those in business to make enough money to perpetuate the entity and make a reasonable return to the "investors"? If they are smart they will act in a business like manner and not go through another six straight years of industry losses in the Billions. That may be hard to fathom for those of us with more than a few years of experience, we've seen decades of mismanagement and low industry returns and now losses. And many shippers will be shocked to learn what the real costs are to move freight thousands of miles, the industry has taught them to expect low rates and mediocre services. Shippers claim to want better services, are they willing to pay for it? All of this will play out over the next five to ten years.

How to Improve OTIF: 15 Tips for On Time and In Full Delivery
END_OF_DOCUMENT_TOKEN_TO_BE_REPLACED