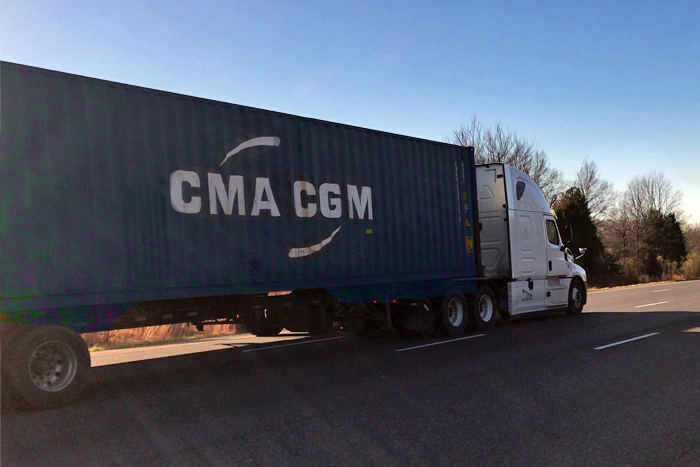 Truckers hauling CMA CGM containers will now be able to draw from an interoperable pool in Memphis, which could result in fewer chassis disruptions during cargo surges. Photo credit: Ari Ashe/JOC.com.

Shippers and truckers are applauding a decision by CMA CGM to join the gray pool in Memphis, with the decision to embrace open choice making it less likely there will be a chassis shortage should volume spike after disruptions from the coronavirus disease 2019 (COVID-19) pass.

Michael Symonanis, director of North American logistics for Louis Dreyfus, points out that joining the largest pool by units in Memphis means CMA CGM will be less likely to succumb to chassis shortages should there be a surge in traffic after the coronavirus disruption eases.

“It should make the freight system for APL and CMA CGM more resilient to shocks because there will be more assets to draw upon,” he said. “Fundamentally, interoperability is about building resilience to sudden shifts in volume, whether it’s weather-related, or unforeseeable events. Right now, the system is not that resilient.”

For CMA CGM, the decision might be less about its opinion whether truckers should be able to use any chassis for its containers and more a numbers game because the interoperable pool, run by Consolidated Chassis Management (CCM), has a plurality share of the equipment in Memphis. If shipper volume surges in the coming weeks to replenish inventory used while Chinese factories were shut down, then having more approved chassis makes an outage less likely.

Shippers and truckers in Memphis have been vocal about their support of an open-choice model, even forming a Supply Chain Innovation Team through the Federal Maritime Commission. TRAC Intermodal and Direct ChassisLink, Inc. (DCLI) blocked a push for a single gray pool covering all Memphis cargo one year ago, despite the backing of an association of ocean carriers and Class I railroads.

Open choice advocates argue truckers waste considerable time in a closed system when they must use a specific chassis. Drivers will have to search for an acceptable unit when it’s unavailable at the closest rail ramp. For example, a certain ocean box might require a TRAC Intermodal private-pool chassis, and a TRAC chassis in the CCM pool would be prohibited. The restrictions can also lead to chassis splits, which occur, for example, when one job must be done on a DCLI chassis and the next on a TRAC chassis. In that case, the driver must return the DCLI chassis to one location, get a TRAC chassis at another location, then proceed to the second container. Truckers would rather use one chassis for the entire day to maximize their hours.

For a wheeled operation, in which railroads mount containers on chassis while unloading a train, a closed system leads to illegal mismatches and unavailable containers when there aren’t enough chassis. CSX Transportation and Union Pacific Railroad are wheeled operations in Memphis, and BNSF Railway is partially wheeled.

DCLI announced last month it would leave the Chicago and Ohio Valley Chassis Pool (COCP) through an orderly drawdown. DCLI explained that controlling its own assets rather than outsourcing to a third party allows DCLI to be “directly accountable to [beneficial cargo owners, or BCOs] for everything from chassis quality to meeting demand at individual locations.”

“There is no universal panacea that gives a blanket guarantee there won’t ever be chassis shortages, even in an interoperable pool,” acknowledged Donna Lemm, executive vice president of sales for IMC Companies, a national drayage provider. “But we know interoperability is more flexible. We know interoperability is supported by the railroads. It improves their ability to effectively work a train, in either direction, especially during times of heightened demand.”

Given a possible surge in Chinese freight in the coming weeks, Lemm is confident the decision lowers the probability that cargo owners incur thousands of dollars in demurrage and detention fees on APL and CMA CGM boxes similar to in Memphis in January 2019 when TRAC ran out of chassis and UP would not allow truckers to bring in their own chassis to relieve the stockpile of containers.