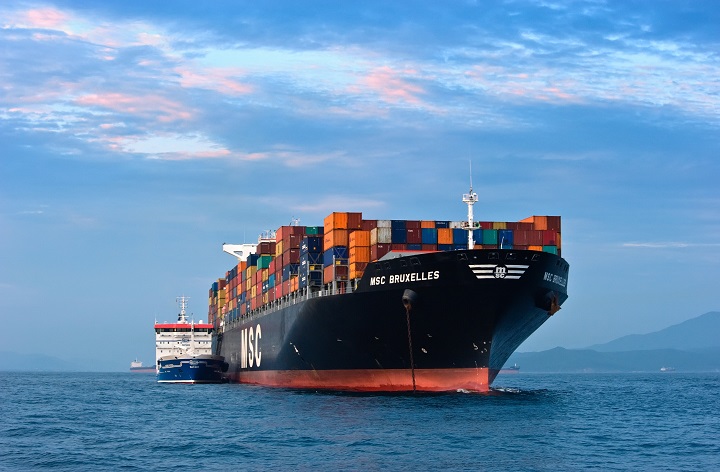 The increase in the price of bunker fuel, driven by crude oil’s 2017 to 2018 surge, is real. But beyond that ocean carriers face a tough sell with shippers regarding the inclusion of other surcharges, given spare capacity and a continued competitive market for shipper business. Photo credit: Shutterstock.com.

Container lines face a steep challenge in recouping emergency bunker fuel and peak-season surcharges (PSSs) because contractual agreements limit shippers’ exposure, and competition among carriers gives shippers leverage in rejecting any “emergency” fees. Alternatively, shippers can threaten to take their cargo to another carrier and take action if they don’t get their way.

Contract clauses forbidding general rate increases, PSSs, and other ancillary charges shield shippers from the new fees sought by carriers, but it’s unclear whether the “emergency” element of the newest wave of surcharges will puncture this contract armor. Non-vessel operating common carriers’ (NVOCC) contracts where forwarders don’t detail named accounts are subject to such fees, a move some see as an effort by carriers to essentially use NVOCCs as their sales team.

For carriers that deal primarily with BCOs directly, and NVOCCs with named accounts, only 30 percent of the customers pay the surcharges, container line executives told JOC.com. For some carriers, it could be 40 percent. However, for shipping lines that rely mostly on NVOCCs for their cargo base, as many as 60 percent of the contracts can be open to surcharges.

While the wrangling between shippers and carriers over surcharges isn’t new, the number of surcharges levied by carriers, from those tied to the US trucking sector's electronic logging device mandate to freight-all-kind (FAK) charges, has risen in the last nine months. With many carriers fresh off a lackluster contracting season for the Asia-Europe and trans-Pacific trades, and some reporting first-quarter losses, shipper skepticism of the true driver of such surcharges is rampant.

“If you have an agreement, you should stick to it. We are not in a war, we are not in an oil crisis. There is no emergency, so there is no need for an emergency bunker surcharge,” Fabien Becquelin, maritime policy manager for the European Shippers’ Council (ESC), told JOC.com. “Both parties should take into account the possibility that the bunker price could go up again. The carriers should hedge their fuel costs.”

Ocean carriers counter that not only have fuel prices spiked to levels they couldn’t have predicted, but that ship chartering and US trucking costs have, too.

The average cost of IFO 380 bunker fuel per metric ton across the ports of Shanghai, Rotterdam, and New York-New Jersey is up 67.2 percent from the January 2016 low of $146, and has risen 19.4 percent to $445 per ton from the the start of April to June 8, according to IHS Markit data.

That spike still pales in comparison with the one in 2008, when the price of crude oil reached $140 a barrel and bunker fuel reached $667 per metric ton ($735 per ton). Crude oil per barrel has traded in a $65 to $75 range since the start of the year, and IHS Markit forecasts prices will rise 18.4 percent from April’s average price of $71.80 per barrel to a peak of $85 in July and August before falling to $81 by October. West Texas Intermediate Crude traded Monday up 33 cents to $66.07 a barrel. Fuel costs account for about 15 percent of carriers’ operating costs, according to Alphaliner.

To add to the confusion, the surcharges are paid by some BCOs and NVOCCs depending upon their contracts with ocean carriers, but other contracts contain no-surcharge provisions. As one BCO told JOC.com, his company has its own bunker fuel adjustment (BAF) that is adjusted monthly, and the BCO will not accept any surcharge unless it is mandated by a government. Another BCO said he has “no sympathy” for an emergency bunker fuel surcharge. His company has a BAF formula based on the last two months of the daily bunker pricings, so it should cover any swings in the price of bunker.

The three container lines that reported a profit in the first quarter were led by Hapag-Lloyd, with an operating profit of $66 million for a margin of 2.1 percent, Alphaliner noted. CMA CGM, with a margin of 1.6 percent, and Wan Hai, at 1 percent, were also profitable in the first three months of the year. The remaining eight global liner companies reported losses. Most carriers were disappointed by their performance, given the industry’s collective operating profit of $7 billion in 2017, the highest since 2014, according to Drewry.

In contrast to their reaction to the emergency bunker fuel surcharges, BCOs and NVOCCs found nothing unusual when carriers on June 1 filed for a PSS effective July 1. The US Federal Maritime Commission requires that carriers provide a 30-day notice of their intention to increase freight rates, and with the peak season approaching, it is common to test market reaction to a PSS at this time of year, said Bruce Chilton, vice president of trade management at Ascent Global Logistics.

Past experience with early summer PSS filings demonstrated that market conditions are not yet ready to support a surcharge. With vessel utilization rates normally around 90 percent this time of year, BCOs and NVOCCs have no problem booking space, so they will simply shift to another carrier if their first choice pushes the surcharge. A carrier spokesperson agreed that carriers’ initial attempts at PSS are “testing the waters” in preparation for late summer and autumn. Carriers on July 1 will likely file for an Aug. 1 PSS, and if vessel utilization rates climb into the mid to high 90s in August through October, carriers will probably be able to secure at least a portion of the increase they seek.

Regardless of the type of surcharge that carriers file, the patchwork of service contract arrangements in the trade is a limiting factor on their implementation. The basic service contract between carriers and BCOs runs roughly from May 1 through April 30 the following year. The largest BCOs normally have a no-surcharge clause that is closely adhered to by the carriers. Large BCOs with thousands of shipments spread out over the year insist upon certainty in pricing. Since the largest BCOs provide carriers with their base cargo for the year, carriers do not want to upset their relationship with their largest-volume customers.

An exception to the no-surcharge arrangement is when carriers and BCOs must respond to an emergency — such as in 2008 when the price of oil surged to over $140 a barrel. During those unusual events, the BAF in the contract, which is changed quarterly or monthly, can not keep up with the weekly increases in bunker fuel costs. Although many BCOs and NVOCCs will not resist an emergency fuel surcharge in those cases, they insist that today’s relatively modest increase in the price of oil — which already began to slip over the past couple of weeks — does not constitute an emergency.

Furthermore, many carriers today hedge their bunker fuel costs through multimonth contracts with fuel providers. “Shippers will also want to know what steps have been taken to mitigate the impacts of rising fuel prices, including the impact of fuel hedging, which are designed to manage the risks associated with the single-largest cost component of operating container ships,” said Chris Welsh, outgoing secretary general of the Global Shippers’ Forum.

NVOCC contracts that cover specific BCO accounts, known as named accounts, also normally contain no-surcharge clauses, and they are treated the same way that carriers handle their large BCO contracts. NVOCCs generally sign a mix of named-account and variable-account contracts (also called FAK contracts). The variable account shippers understand that when cargo volumes are low during the slack shipping months, they may actually pay lower rates than the larger BCOs pay in their annual service contracts, but during peak-volume periods they will probably pay decidedly higher rates, plus surcharges. Carriers generally do not allow NVOCCs to shift their customers back and forth between named and variable contract arrangements in order to achieve the best rate available at the time.

The breakdown between fixed-rate and variable-rate accounts can vary considerably by carrier. Some carriers rely more heavily on NVOCCs and smaller shippers willing to play the spot market, so as many as 60 percent or more of their business can be variable-rate accounts subject to surcharges. Other carriers have historically dealt mostly with larger BCOs and named-account NVOCC contracts that are not subject to surcharges, and those may represent 60 percent or more of their business.

The spot market is a moving target that also has an impact on pricing, especially during service contract negotiations in the spring. Even in what is usually the slack period, carriers will attempt to keep the spot rates above the psychological benchmarks of about $1,000 per FEU to the West Coast and $2,000 per FEU to the East Coast because they do not want their BCO customers to think they can sign for these low rates in their service contracts.

Welsh: emergency surcharges ‘have no place in modern liner shipping’

Welsh said emergency surcharges “have no place in a modern liner shipping market” where costs and prices should be mutually agreed upon between customers and suppliers in their service contracts. Emergency surcharges are a “none too subtle attempt to impose non-negotiable charges on customers,” he said.

Asia-Europe shippers have told JOC.com that despite carriers going in high, after negotiations their contract rates were agreed at the same levels as those secured in 2017, while forwarders on the trade reported contract rates at levels below those of 2017.

“It seems the carriers are trying to get the money that they couldn’t get in the contracts,” said David Bennett, president of the Americas at Globe Express Services. Did the carriers this spring pass up an opportunity to lock in higher service contract rates? The eastbound Pacific spot rates in the first week of June were $1,445 per FEU to the West Coast and $2,463 per FEU to the West Coast. Some observers might say BCOs playing the spot market are paying higher rates than BCOs paid in their service contracts, and that’s the way it should be. However, others might say the market would have accepted higher service contract rates.

Becquelin of the ESC sees the disruptions caused by the surcharges as an opportunity for carriers and shippers to start from scratch and agree upon a new service contracting regime in which the base freight rate is negotiated alone by pricing specialists, and then later each side brings in other teams such as legal and accounting to negotiate a framework agreement that deals with all of the issues that are not base freight rates. This would enable the teams to take a deep dive into key performance indicators, no-shows, minimum quantity commitments, and surcharges, he said.

“That will take a real mind shift. The shipper should be treated as a partner of the carrier, which is too often not the case,” he said.

The charges are per teu or