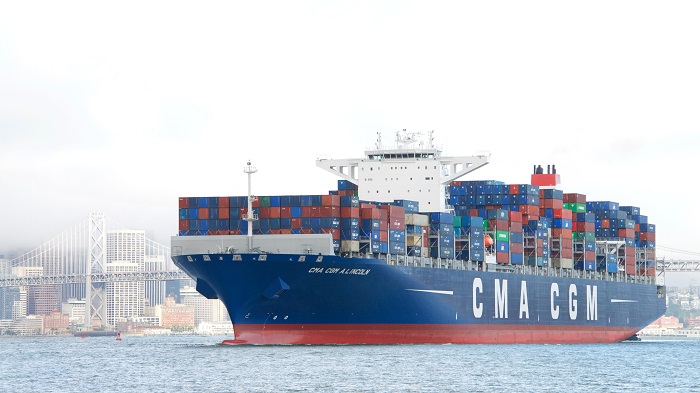 CMA CGM is the third-largest shipowner in the world. Photo credit: Shutterstock.

The sale of Libra Terminais — one of the oldest, established private container terminal operators in Brazil — appears to be moving closer, with word that Terminal Link, a joint venture between French carrier CMA CGM and China Merchant Holdings International (CMHI), has entered an exclusive agreement with the Brazilian company with a view to an outright purchase.

Last year, CMA CGM shifted extra deep-sea services to Libra Terminais’ two box facilities in Santos — T-35 and T-37, the first-ever privatized container terminal in Brazil — with a view of saving the facility from extinction and the possibility of establishing a presence in Brazil, JOC.com reported. CMA CGM has been trying to accomplish this goal for 15 years, in Santos, Rio de Janeiro, Sepetiba, Suape, and Vila do Conde, in the far north of the country.

Previously, the closest CMA CGM has come to a deal with this focus was in late 2015 when it nearly bought Sepetiba Tecon, but owner Benjamin Steinbruch’s 1 billion reias ($311.9 million) asking price was too high.

Since then, Terminal Link’s Chinese partner, CMHI, has taken a foothold in Brazil via the 2.9 billion reais purchase on its own, of 90 percent of Terminal de Conteineres de Paranagua, or TCP, in Parana state; but now, according to the Brazilian newspaper Valor, Terminal Link has commissioned consultants Ernst & Young to carry out due diligence so that the sale of Libra Terminais proceeds. Lazard is acting on behalf of the Borges Torrealba family that owns the two Santos facilities, as well as another box terminal in Rio de Janeiro — Libra Rio — which is also included in the deal.

One consultant who has worked closely with CMA CGM in recent years said it was almost a done deal, with just one snag: the liabilities that Libra Terminais has with Codesp, the Santos port authority. Those liabilities resulted from a long-running dispute over who was supposed to pay for certain infrastructure improvements (access roads, etc.) when the original privatization took place in 1995. According to Libra sources, the Brazilian port operator has placed more than 1 billion reias into an escrow account for the final settlement, but this will have to be finalized before the Terminal Link purchase can go ahead.

“This tie-up has been on the cards for more than a year now and it makes sense for both parties,” the consultant said. “Terminal Link wants a stake in Santos and Libra is finding it difficult financially and the Torrealba family want out of the ports and shipping sector altogether. It also continues the trend of shipping lines verticalizing their businesses and investing in port terminals. In Santos you can already see MSC [Mediterranean Shipping Co.] and Maersk Line [via sister company APM Terminals] with an interest in BTP, and Maersk Line and new acquisition Hamburg Süd have one with Porto Itapoa, in the south, and also MSC has entered into a [joint venture] with Multiterminais in Rio de Janeiro. This is a trend that is growing all the time and I don’t think we have seen the end of it. CMA CGM will also benefit from economies of scale with the introduction of the Mercosul Line coastal service into their theatre of operations. They should benefit considerably if this deal goes through.”

Hutchison Ports International and PSA International have also displayed an interest in buying Libra Terminais, but CMA CGM re-captured the momentum from them by switching its ESA and SamWaf services from rival Santos Brasil to Libra last February.

Libra Terminais’ two terminals in Santos were in fatal, life-service decline just over a year ago, and their market share had fallen from about 25 percent (and 801,500 TEU), six years ago, to a paltry 4 percent, according to statistics from Codesp. Moreover, that volume was from one Brazilian cabotage service and CMA CGM’s Brazex from the east coast of South America (ECSA) to the Caribbean and US Gulf. CMA CGM then came in with two, new deep-sea services, the ESA to Asia and SamWaf to West and South Africa, to help support the company. Talks then began regarding a possible permanent tie-up with Terminal Link. Those discussions went into overdrive in September, added the consultant, who does not wish to be identified.

The ESA service, from ECSA to Asia, which involves Evergreen (with four vessels), Cosco (four ships), Yang Ming (one vessel) as well as CMA CGM (three vessels), and the SamWaf service ECSA to West Africa and South Africa — including Hamburg Süd, Nile Dutch, and CMA CGM — have brought in a lot of extra revenue to the Libra operation, and have, essentially, saved the company from bankruptcy.

Codesp figures for the first 11 months of last year show that Libra is now responsible for a 10 percent share (or 347,518 TEU) of Santos' overall throughput, which was 3,524,785 TEU from January to the end of November. And with more CMA CGM services likely to transfer to Libra, that percentage share should rise again this year.

CMA CGM has also boosted its interests in Brazil with the purchase of cabotage and Mercosur coastal operator Mercosul Line, from Maersk Line, who had to divest to enable the company to take over Hamburg Süd subsidiary Alianca Navegacao.

Terminal Link was founded by CMA CGM, back in 2001, with the intention of lowering costs for the carrier via self-operation; the global terminal operator now has a network of more than a dozen facilities throughout Central and North America, Europe, Africa, and Asia. And now it looks likely it will get its long-awaited opening in Brazil.

The CMA CGM is the third-largest shipowner in the world, with a fleet of 504 vessels, good for 11.6 percent of the world’s container fleet capacity

Maersk Line and MSC are in first and second place, with 19.5 percent and 14.7 percent of the market, respectively, according to Alphaliner.

In the 1990s, Grupo Libra was also a shipping company and operated three deepsea container services: Paulista Line, Libra Line, and Nacional Line, to the US East Coast, to the Mediterranean, and to North Europe. They were then taken over by Compania Sudamericana de Vapores which was, in turn, taken over by German carrier Hapag Lloyd.