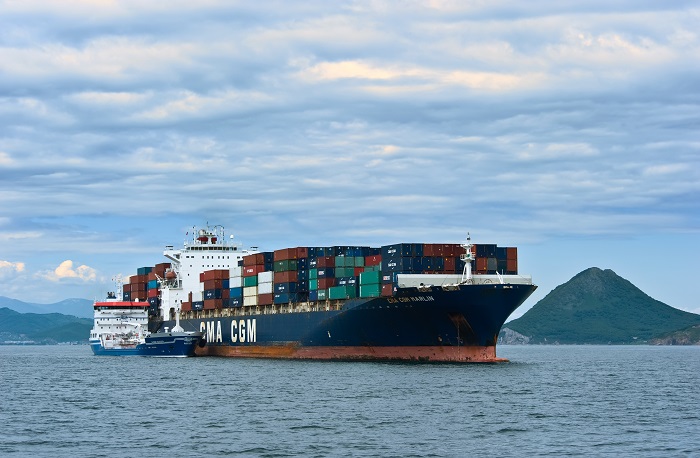 CMA CGM's service, if added, would complement existing feeder services by other ocean carriers. (Above: A CMA CGM ship in the Pacific Ocean.) Photo credit: Shutterstock.com.

With Bangladesh's container-based trade continuing to grow at a rapid rate, CMA CGM plans to reintroduce its feeder service to and from Chittagong.

In April 2015, CMA CGM suspended its Chittagong feeder service amid massive congestion at the port.

“The business was not satisfactory then. So, we suspended the feeder service temporarily,” said Wahid Alam, general manager of APL (Bangladesh) Private Ltd, a subsidiary of CMA CGM in Bangladesh. CMA CGM purchased APL in February 2017.

“But now I am hopeful of a reintroduction of the service,” at some point in the future, Alam said. He added that if the port situation improves even slightly, “we will re-launch the service from Chittagong. We already have held talks over the issue. We are even thinking about a direct service to China from Chittagong Port.”

The service, if added, would complement existing feeder services by other ocean carriers. In March, Hyundai Merchant Marine introduced a new direct feeder service from South Korea, with calls at China ports before reaching Chittagong. HMM's new service has reduced container transport time to 14 days from the prior 25 days. The latter time is via a trade lane that transships containers from ports in Singapore and Colombo.

Bangladesh’s annual trade with China has grown to nearly $12 billion. Further, Bangladesh is studying a free trade agreement (FTA) with China; bilateral trade is likely to increase if the two nations approve an FTA.

China has committed to relocating some of its factories to Bangladesh and making new investments in Bangladesh, once the FTA is signed. The goods, to be produced from Chinese-owned factories in Bangladesh, will be exported back to China — one example of how bilateral trade volume will increase.

Alam said his company at first will reintroduce the Chittagong-Singapore feeder service. The other destinations, including China, will be connected after that.

What’s more, Chittagong has been operating at a very high productivity level for a considerable period of time, he said. Chittagong’s annual capacity is 1.7 million TEU, but the port currently handles about 2.8 million TEU per year. “It’s a miracle,” Alam said.

“The port capacity will grow manyfold once the newly taken projects are implemented. By 2023 several terminals and yards, including a deepsea port in Matarbari [south of Chittagong Port] are expected to start operation,” Zafar Alam said.

Mother vessels cannot enter Bangladesh’s water due to its low draft, hence seaborne trade is dependent on small-sized feeder vessels with capacities of about 1,200 TEU.

The Matarbari deepsea port, to be built with funding from the Japan International Cooperation Agency, has as its goal a port capable of handling 8,000-TEU vessels in Bangladesh, to help facilitate the nation's growing export-import trade.