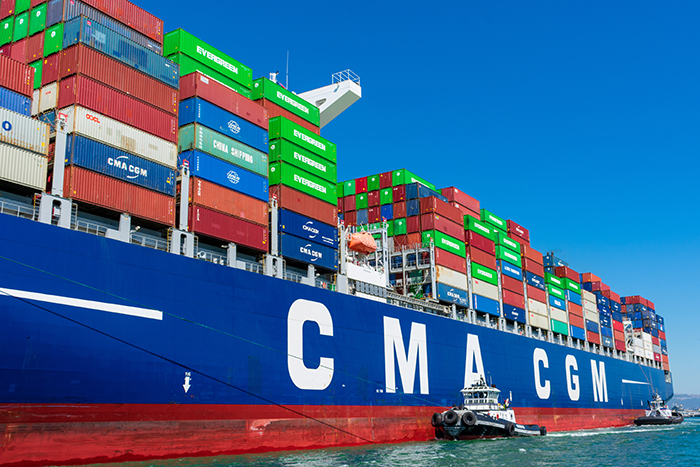 The CMA CGM Group reported a $109 million loss in the second quarter of 2019 despite a 6.3 percent increase in container transport volumes. Photo credit: Michael Vi/Shutterstock.com.

Mid-single digit volume and revenue growth and a reduction in transport costs per unit was not enough for the CMA CGM Group to stem a $109 million loss in the second quarter dragged by higher costs amid a higher debt load.

In its Q2 earnings report, released Friday, the world’s fourth-largest ocean carrier said the deployment of a previously expanded initiative to cut costs via the rationalization of its regional specialist brands and increased operational efficiency helped reduce operational expenses by $51 per TEU transported during the quarter. Even so, CMA CGM’s adjusted net debt grew to $18.6 billion, compared with $18.2 billion at the end of the first quarter and $7.7 billion as of Dec. 31, 2018.

The sharp rise in debt stems primarily from CMA CGM’s recent purchase of third-party provider CEVA Logistics, which contributed $2.8 billion in debt. The new regulations — referred to as International Financial Reporting Standards 16 (IFRS 16) — are also forcing all ocean carriers to disclose long-standing debt that may previously have been left “off the books,” Nilesh Tiwary, lead analyst, container shipping at Drewry, told JOC.com.

“The new IFRS 16 lease accounting standard forces carriers to put their long-term lease obligations on their balance sheets,” Tiwary told JOC.com. “The regulation requires carriers (or lessees) to recognize leases in the balance sheet as a right-of-use [ROU] asset and a lease liability. In the income statement, the lease cost is replaced by the depreciation of the leased asset and an interest expense for the financial liability. As a result, the new lease accounting standards have exposed large chunks of debts which carriers managed to hide earlier through off-balance-sheet borrowing.”

The group posted a $109 million net loss for the second quarter — up from a $77 million loss in the same 2018 period — despite shipping revenue rising 4.6 percent year over year to $6 billion as total container transport volume grew 6.3 percent to 5.5 million TEU. Excluding the impact of the IFRS 16 rules and contributions from CEVA, however, CMA CGM’s adjusted earnings before interest, taxes, depreciation, and amortization (EBITDA) surged 60.1 percent to $343.6 million.

CEVA integration going ‘according to plan’

Marseille-based CMA CGM said previously announced efforts to return CEVA to profitability by the end of the year — which includes the consolidation of the third-party logistics provider's (3PL’s) corporate activities in a new operations center in Marseille and the installation of interim CEO and former head of APL Nicolas Sartini on a permanent basis and group CEO Rodolphe Saadé as chairman of the CEVA board — is “proceeding according to the strategic plan.”

Although CEVA remains a distinct brand within the greater group, the integration is part of a larger effort by CMA CGM to offer integrated transportation solutions that connect its core ocean offering with shoreside services such as warehousing and inland distribution. Similar efforts are under way at Copenhagen-based competitor Maersk and, to a lesser extent, Chinese state-run Cosco Shipping.

Looking ahead to the remainder of the year, CMA CGM said it expects improved results in the second half. The company said it will continue to focus on cost-cutting through enhancements to operational efficiency, adding that “the positive momentum generated by the acquisition of CEVA Logistics will gradually enable the group to benefit from a less volatile and more diversified environment than the maritime sector.”

Permalink Submitted by ferrullig@minds... on Sep 7, 2019 11:45AM EDT
And interesting thought process in Marseilles, must be a hell of a plan going from $7. Billion in debt to $18. Billion and using a company that was losing a Million a day to help turn the tide.
Maritime News›Container Lines›CMA CGM