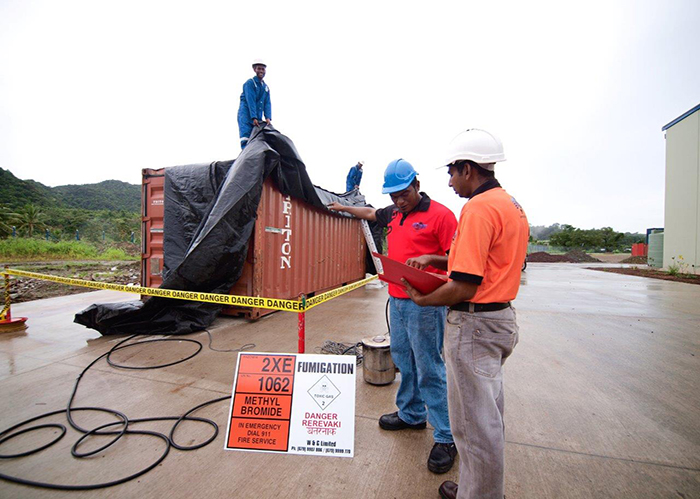 Container fumigation, pictured, could add extra costs for shippers, and the exact requirements for getting a Mosquito Eradication Certificate are uncertain.

Efforts by Chinese authorities seeking to prevent the spread of Zika by placing demands on the way containerized goods enter China have sparked concerns among U.S. exporters about added costs and delays, a trade group said Wednesday.

Shipping companies have alerted members of the Agriculture Transportation Coalition, which represents agriculture exporters, that they will need a Mosquito Eradication Certificate to ensure passage of goods into China, the organization said. Without it, the goods might be quarantined or forced to undergo “costly fumigation,” the coalition said in a release.

“(Members) are very concerned right now,” said Abigail Struxness, program manager for the coalition. “This potentially has the ability to delay delivery on time, and affordably, to customers. It could be an added expense. It could mean getting delayed at the fumigation facility.”

Shipping companies began alerting customers of the requirements recently, after China added the United States to the list of countries for which China requires incoming goods to be undergo anti-mosquito treatment.

The coalition released a letter from Mediterranean Shipping Co., sent out today, alerting customers to the new requirement. The coalition also released a letter sent by APL in April, when the U.S. was not considered to have a Zika problem, that said without a mosquito eradication certificate issued prior to departure “vessels/containers will be instructed to perform eradication measures” under the supervision of the nearest Chinese Entry-Exit Inspection and Quarantine Bureau.

Part of the difficulty, however, is that it is not clear what are the fumigation requirements or what chemicals should be used, or who would issue the certificate, Struxness said. Moreover, she added, Zika is not yet a major issue in the U.S., and the main area of concern is limited mainly to Florida. Authorities have identified 21 cases there, according to published reports.

The MSC letter listed 31 countries in the Americas where Zika has been detected — among them Mexico, most of Central and South America, and parts of the Caribbean. The anti-mosquito measures are required by the Chinese authorities.

Canada Trade and Shipping Outlook
TPM22: What We Learned — Container Shipping in the Crosshairs
Managing E-Commerce From Order to Delivery and Beyond
END_OF_DOCUMENT_TOKEN_TO_BE_REPLACED