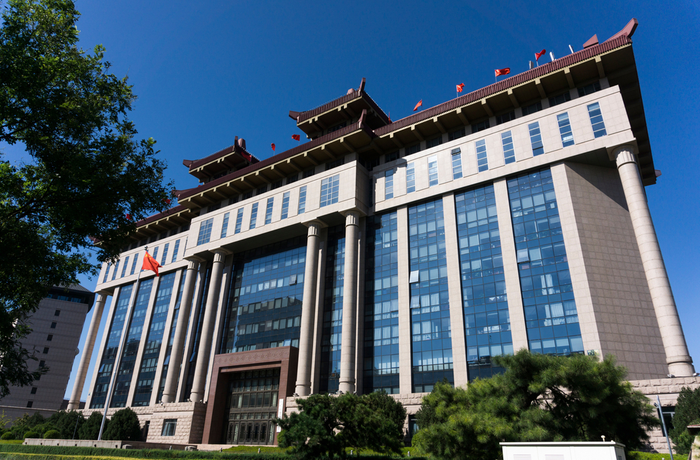 The Chinese ministry of transport and communications (headquarters pictured) have suggested ti  container lines that they inject more capacity into the trans-Pacific trade. Photo credit: Shutterstock.com.

Editor’s Note: This headline and story has been updated to reflect additional sourcing confirming that Chinese authorities instructed container lines to restore capacity.

The ministry of transportation and communications on Friday gave the guidance to a group of major carriers at a Shanghai meeting where new capacity reporting requirements were discussed. Two container lines executives — one with a Europe-based and the other with an Asia-based carrier — said Cosco Shipping has agreed to suspend a Sept. 15 general rate increase. Cosco’s decision to suspend the GRI is being shared with its customers, according to two forwarders and one forwarder’s advisory of the GRI suspension to costumes.

Container lines’ ability to adjust trans-Pacific capacity has been key to lifting their profits despite lower global container volumes. Carriers enjoyed their most profitable second quarter since 2010, posting a total profit of $2.7 billion, according to the latest Sunday Spotlight report from Sea-Intelligence Maritime Analysis.

If carriers do in fact heed Chinese regulators’ direction, “it would be an unprecedented impact on the market, and more worryingly, potentially derail the carriers’ ability to manage capacity in the face of extreme demand volatility,” said Lars Jensen, CEO and partner at SeaIntelligence Consulting. “Placing a ban on blank sailings is essentially a non-issue right now in a tight market, but it is highly likely we will see another downturn ahead of us, and if carriers are barred from managing capacity, this becomes problematic.”

In what is still very much of an evolving scenario, carriers are digesting what they were told by the Chinese government and how it will impact their businesses going forward. Unlike the European Union, which declined to impose additional requirements on alliances in renewing the bloc exemption for consortia for five years last fall, China can act swiftly and create major market impact, as it did in 2014 when it shocked the industry by rejecting the proposed P2 alliance of Mediterranean Shipping Co., Maersk and CMA CGM. MSC and Maersk ultimately created the 2M alliance, while CMA CGM joined the Ocean Alliance with Cosco, OOCL, and Evergreen.

In an interview with JOC.com, Jensen said that the reported capping of spot rates by Chinese authorities would have limited impact on the market, considering that spot rates were unlikely to remain at their current levels much longer anyway. More relevant is the question of how Chinese authorities would address capacity management in practice, as carriers’ ability to swiftly withdraw capacity to meet lower volumes in the second half will be key to their newfound profitability which was based on doing precisely that in the first half, he said.

“I as a carrier can either have a scheduled service and I end up blanking half of the sailings, or I say I have no service, but I ad hoc put in extra loaders. It’s the same effect,” Jensen said, suggesting capacity could be difficult even for China to effectively regulate in practice. “Thus, this could range from a non-issue to something that is destabilizing if suddenly the carriers aren’t able to effectively manage capacity. Capacity management as we have seen in 2020 is absolutely pivotal to carriers financial health.”

Chinese regulators on Friday asked carriers how much trans-Pacific capacity has been suspended between July and October; what percentage of their volume is spot cargo; how spot rates are established; why spot rates have increased; and what carriers are doing to curb freight rates, according to an MOT document obtained by JOC.com. Regulators also noted the decline in oil fuel prices and port fees at some cargo gateways this year, and asked carriers how they are disclosing to shippers reduced fuel surcharges due to lower bunker fuel prices.

Eastbound container line spot rates from Shanghai to the US West Coast rose 1.5 percent from the prior week to $3,813 per FEU, hitting yet another new record after six straight weeks of increases, according to the latest reading of the Shanghai Containerized Freight Index (SCFI), as published on the JOC Shipping and Logistics Pricing Hub. Container spot rates from Asia to the West Coast are up 163 percent from a year ago.

Pricing to the East Coast dipped 0.1 percent on a sequential basis to $4,534 FEU, but was still up 80 percent from the same week last year, according to the SCFI.

Global Shipping Outlook: A Sneak Peek at 2021
Port Performance North America: Managing Cargo Flow During a Pandemic — and Beyond
END_OF_DOCUMENT_TOKEN_TO_BE_REPLACED