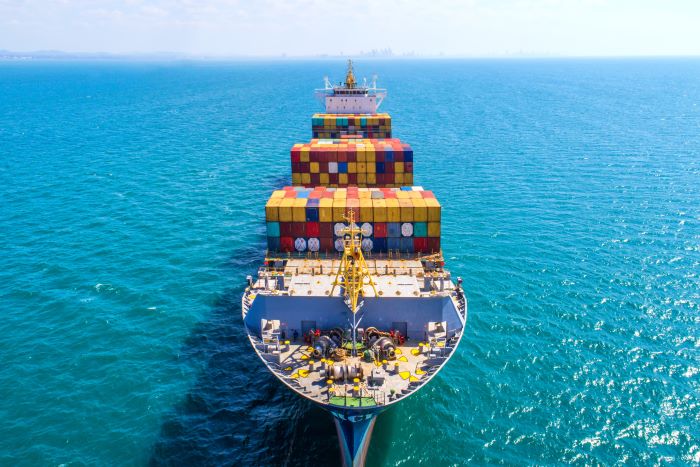 Capacity cuts made to keep pace with the COVID-19-linked drop in demand have kept freight rates aloft. Photo credit: Shutterstock.com.

Carriers face the potential of taking drastic action — including permanent cuts in capacity and increased scrapping — if there is a prolonged downturn in demand caused by successive outbreaks of the coronavirus disease 2019 (COVID-19), maritime consultancy Drewry said Tuesday.

Heaney said a lengthy downturn, potentially of five years, would see “withdrawal of capacity on a more permanent basis, demolition ramp-up, and an end to new builds.”

Carriers instituted a vast program of blank sailings on east-west and north-south trades from March as the global pandemic halted consumer demand after governments around the world imposed lockdowns to keep people at home as part of efforts to control the virus. More than 400 sailings were cut from schedules in April and May, although carriers are slowly restoring services as demand recovers.

The capacity cuts, which saw about 10 percent of the container ship fleet idled in May and June, according to Drewry, have helped support freight rates. As a result, Drewry's head of research, Martin Dixon, told the webinar that carriers are on course to make operation profits of $9 billion this year, “which is a complete reversal of the $4 billion deficit” forecast in March.

Dixon said 2021 would be another strong year, with carriers forecast to generate operating profits of $7 billion against the $3 billion forecast in March, although that is “predicated on carriers holding on to the gains” seen this year.

Dixon thought freight rates could soften in the second half of this year, with an overall 3 percent gain in rates, as carriers found it more challenging to match capacity to recovering demand.

While Drewry expected the container shipping industry to see modest demand growth up to 2024 with a compound average growth rate of 3.5 percent per year, there were “huge downside risks from a larger virus outbreak this year and new outbreaks next,” Heaney said.

As a result, Drewry forecast negative demand growth this year, ranging from minus 7 to 8 percent assuming a global economic recovery, to a 12-percent drop in demand if further virus outbreaks occurred.

Those bleak forecasts come as the US has seen at least 3.3 million virus cases with about 136,000 deaths up to Tuesday. In Asia, Japan is seeing a second wave of virus infections and Hong Kong a third wave.

“Next year there is greater uncertainty with either 10 percent growth or negative growth,” Heaney said. “Nobody is in control of the virus,” which made it challenging to be confident in any forecast, he added.

Heaney said COVID-19 has exacerbated vessel oversupply, with the global container ship capacity standing at about 23 million TEU. He expected global capacity to rise by 2.6 percent, or about 740,000 TEU, by the end of this year as a result of “very substantial slippage" in vessel deliveries.

“Just 65 percent of what was anticipated on January 1” will actually be delivered, Heaney said, adding he believes delivery of about 400,000 TEU would be delayed until next year. “Appetite for new builds is waning,” he said, noting vessel orders would only be canceled if there is a protracted downturn.