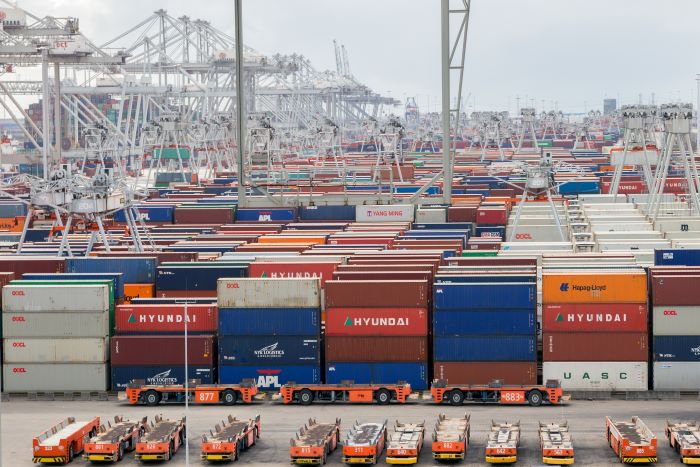 Peak season demand continued on the Asia–North Europe trade through the traditionally slow December period and, combined with a growing equipment shortage, led to growing congestion in some European and UK port hubs. Photo credit: Shutterstock.com.

2M Alliance partners Maersk and Mediterranean Shipping Co. will cancel four Asia–Europe sailings during Chinese New Year in mid-February. Hapag-Lloyd, and by extension THE Alliance, will skip one voyage each on three Asia–Mediterranean services in late March and early April.

The decisions mirror a similar move by Hapag-Lloyd and THE Alliance on the trans-Pacific trade. Hapag-Lloyd told JOC.com earlier this week delays and disruptions have become so severe that it will blank 21 sailings between Asia and North America in February to restore schedule integrity.

In a Friday advisory, Maersk said it would blank one voyage each on the dedicated Asia–North Europe AE5/Albatross and AE6/Lion services, the Asia–Mediterranean AE11/Jade, and the AE7/Condor, which stops in Colombo and Tangier en route from Asia to North Europe. In a separate notice, MSC said it would blank one sailing on the Griffin service, an ad hoc loop that commenced in June. The missed services were scheduled to depart their first port of loading in Asia between Feb. 3 and Feb. 15.

Hapag-Lloyd said it would skip sailings on THE Alliance’s MD1, MD2, and MD3 services between Feb. 26 and March 1 “as part of a schedule recovery program” in response to “the recent, unprecedented market situation causing severe port congestion and vessel delays around the globe.”

Hapag-Lloyd listed alternative booking options for each of the blanked sailings, and Maersk said it would secure alternative routings to minimize the impact on customers.

Maersk said in the advisory it aimed “to free up these services for schedule recovery measures to respond to the recent, unprecedented market situation with severe port congestion and equipment limitations across global supply chains.”

“This situation has been driven by a combination of rapidly increased demand and measures to fight the pandemic that led to slower supply chain operations across ports, inland depots, warehouses and inland transport modes,” the carrier added.

Peak season demand continued on the Asia–North Europe trade through the traditionally slow December period and, combined with a growing equipment shortage, led to growing congestion in some European and UK port hubs.

Carrier on-time performance on the Asia-North Europe routes fell from 83 percent year over year to 40.6 percent, with the average vessel delay of 6.4 days representing an increase of 3.24 days compared with December 2019, according to data from Sea-Intelligence Maritime Analysis.

Another THE Alliance member, Ocean Network Express (ONE), has also told JOC.com it will blank sailings to enable it to reposition vessels to ease delays and help provide a full service after Chinese New Year, which begins Feb. 12, but was unable to provide further details.

“The void sailing plan will not be fixed until the very last minute,” a ONE spokesperson told JOC.com this week.

ONE told JOC.com that it’s facing week-long delays in calls at Rotterdam and Southampton on Asia–Europe services while omitting calls at Asia ports, including Hong Kong, in an effort to restore schedule reliability.

“I believe carriers are blanking far fewer sailings, especially for trans-Pacific, Asia-Europe and trans-Atlantic trades,” Mike Gildea, newly appointed chief executive of Fendale Logistics, a UK-based forwarder, told JOC.com. “Less than 2 percent have been canceled for February and March this year, compared with about 20 percent canceled in the same months last year.”

Keith Wallis contributed to this report. Contact him at keithwallis@hotmail.com.