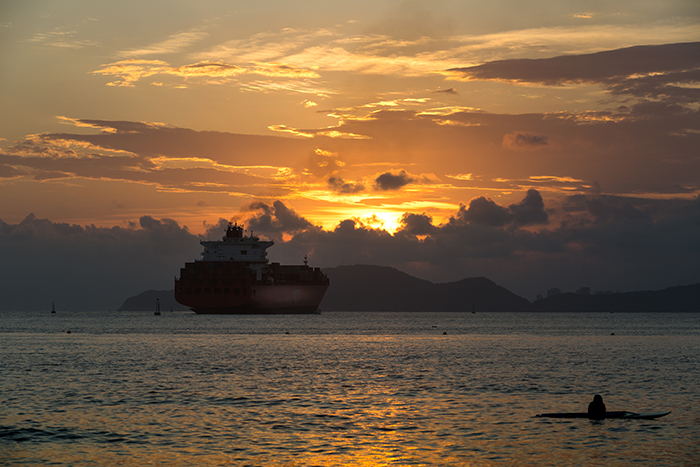 After container lines slashed capacity by nearly one-fifth with only a short-lived bump in spot rates, shippers moving goods from Asia to the east coast of South America (ECSA) should brace for more capacity cuts. However, carriers may find it difficult to withdraw additional capacity as long as backhaul volume, in particular exports from Brazil, remains strong.

Carriers in early March cut capacity approximately 18 percent on the trade, which accounts for nearly one-third of all foreign containerized trade in and out of Brazil, by skipping sailings on two strings and slow-steaming another service. Maersk Line and Ocean Network Express each canceled voyages on their respective Asia/Asas and Ipanema loops, while Evergreen, Cosco Shipping, Yang Ming, and CMA CGM slowed their joint ESA service. This pushed headhaul spot rates up to $1,500 per TEU, only for rates to fall back below $1,000 per TEU this month, according to São Paulo-based SOLVE Shipping Intelligence Specialists.

The usual post-peak season slump saw inbound freight rates from China to Brazil fall to just $640 per dry TEU by mid-December, according to the Shanghai Containerized Freight Index (SCFI), before gradually rising to $1,300 per TEU by mid-March and $1,500 per TEU at the end of the month. Spot rates in December 2017 were considerably higher at about $2,800 per TEU.

SOLVE director Leandro Carelli Barreto attributed the massive 77 percent decline primarily to a weakening of the Brazilian real — now trading at 4.00 per US dollar compared with 3.50 for much of last year and 3.20 in 2017 — which has made imports more expensive. “It would seem that after a good start to the year, demand has become very weak and the main factor is the weak real along with the reduction in investor confidence,” explained Barreto. “This trend has been great for Brazil and our balance of payments but it is terrible for importers and the carriers as rates are tumbling rapidly.”

According to SOLVE’s Shipping Intelligence Platform, blank sailings in March, April, and May brought overall deployed capacity in the Asia-ECSA trade down to 30,912 TEU per month, which allowed carriers to ramp up freight rates. By May 10, however, southbound SCFI rates had slipped to $940 per TEU, down 17.4 percent from the previous week and well below the 12-month average of about $1,400 per TEU. The weekly percentage decline was the largest by far of the 13 trade lanes tracked by the SCFI and was accompanied by a utilization figure of just 63 percent, according to SOLVE.

The SCFI figures were backed up by Xeneta, the ocean freight rate bench-marking platform, which reported spot rates of $1,000 per dry FEU (usually $200-300 higher than per TEU pricing for import/export trades in Brazil) in December 2018 that rose to $1,835 per FEU, during the three weeks affected by the blank sailings.

“We have seen freight rates on the ECSA to Asia trade route being kept high by the clever use of three blank sailings for imports into Brazil in March and now for exports out of Brazil in April and May,” Henrik Simon, a director for SOLVE and a former trade lane executive for Hamburg Sud in Brazil. “At the end of Week 10 this year [March 8], our research showed the exceptionally high slot utilization of more than 91 percent owing to this measure, which kept vessels almost completely full and freight rates high.”

On the export side, northbound rates from Santos to Shanghai have remained relatively steady at $1,000-1,200 per TEU for the past six months. Backhaul pricing likewise rose to $1,300-1,400 per TEU during the blank sailing period but has since settled at about $1,100 per TEU, according to SOLVE and a JOC.com survey of 10 freight forwarders in Brazil.

Carriers could potentially impose further blank sailings on the route to boost freight rates again, but the high northbound utilization rates could make this more difficult, especially during the busy Argentine fruit seasons. Brazil is also a major exporter of chicken, beef, and pork to China and other countries in the Far East, which also helps fill ships on backhaul voyages to Asia.

Utilization rates on the backhaul from Brazil to Asia have been above or close to 90 percent for almost the whole of 2019, according to SOLVE.

“We had to do something, as the rates were in freefall during December and January, so we introduced a blank sailing,” said the line manager for one of the carriers operating on the trade lane. “We don’t rule out doing it again but the problem now is that boxes are needed for the growing export cargoes, so to impose further capacity restrictions inbound [to Brazil] would be like shooting oneself in the foot.”

Barreto said exporters, in particular beef exporters such as BRF Foods and JBS, had become accustomed to lower rates, so the skipped sailings came as a bit of a shock to the system.

“When the rates from Asia to ECSA were raised, a number of shippers were complaining, especially cotton and coffee exporters,” he told JOC.com. “Several [soy] and pulp shippers who had been utilizing cheaper rates also shifted their business back to breakbulk vessels.”

According to Barreto, the economics of blank sailings have been hugely beneficial to carriers operating in the Asia-to-ECSA trade.

“It is clearly far more expensive if you leave the whole service running with less than 80 percent [utilization],” he said. “If low utilization sees the freight value drop on this route by $200 per TEU, it will mean a revenue loss of around $10 milllion per voyage, whereas to leave a vessel in Singapore for 90 days will cost $2.5-3 million, so it’s clearly cheaper to leave the vessel there.”

The consultant, who like Simon also worked for Hamburg Sud in the past, said that when utilization levels fall even further below 80 percent, as is the case presently, the savings are “even greater.”