New ACL ships on track for delivery next summer

New ACL ships on track for delivery next summer 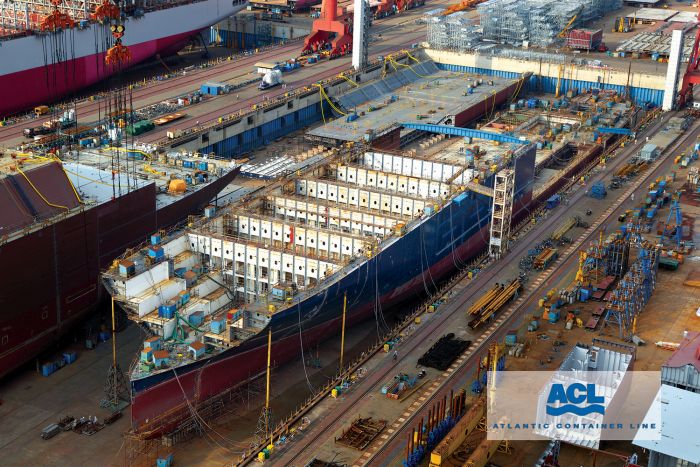 Atlantic Container Line said the first of five new ships in a top-to-bottom fleet upgrade are on track to enter service next summer, followed with an additional delivery every two months until its current fleet of 1980s-era ships is replaced.

The five new vessels will be the world’s largest combination Ro-Ro/container ships, continuing the company’s stable, profitable business model of deploying such ships in the trans-Atlantic trade since the 1960s. The so-called G4 ships will have a container capacity of 3,800 TEUs plus 28,900 square meters of RO-RO space, with a car capacity of 1,307 vehicles. The larger capacity will allow them to have a larger market impact than the smaller ships they’re replacing. Like the earlier ships they will continue to employ cell‐guides on deck, a feature that the company says will allow it to extend its record of never losing a container at sea in over 30 years.

The ships will called Atlantic Star, Atlantic Sail, Atlantic Sea, Atlantic Sky and Atlantic Sun, names that emerged out of a contest among ACL employees, with the winning names chosen by Andrea Cox, a customer service representative at ACL's Halifax customer service center. She said the names were chosen because customers “like simple names to make it quick and easy when making a vessel inquiry or a booking.”

Permalink Submitted by srd@rina.org on Aug 17, 2016 3:17AM EDT
i'm interest and follow acl story and fleet growing from years,before working in a container depot,after in a container leasing company TOL, in a forwarding / shipping company Merzario; now with Rina services. a simple question: i obtained a wall poster of ACL ship through old Incotrans MIlan office (years ago) should You dispose of a new innovative con-ro ships?thanking You in advance for the attention you'll give to my request, pls agree Best regards rondini stefano, via acquarone 7 ,16125 genova italia
Maritime News›Container Lines›Atlantic Container Line
North America›United States