New ACL ship on maiden voyage to US East Coast

New ACL ship on maiden voyage to US East Coast 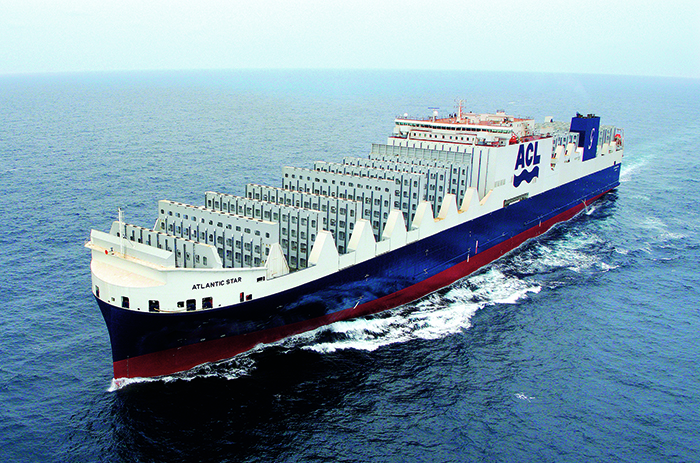 Atlantic Container Line’s first in a series of innovative container/roll-on, roll-off ships that the carrier is deploying in its trans-Atlantic service, will call the Port of New York and New Jersey this weekend on its maiden voyage.

The Atlantic Star is one of five “G4” ships that will replace ACL’s current G3 generation of of con-ros, which have been in service since the mid-1980s.

The new ships will have similar dimensions to the old ones but use unique placement of ballast tanks and other features to substantially increase capacity. The Atlantic Star has a capacity of more than 3,800 twenty-foot-equivalent units, compared with 1,850 TEUs in the older vessels, in addition to 28,900 square meters (311,00 square feet) of ro-ro space and car capacity of more than 1,300 vehicles.

ACL said the Atlantic Star’s first voyage, which called this week in Halifax and will continue to Baltimore and Norfolk after New York-New Jersey, had a full ro-ro load and carried 2,200 TEUs of containers during what normally is a slack period for westbound trans-Atlantic shipments.

The new ships’ ramps are wider than those of the G3s, and the ro-ro decks are higher (up to 7.4 meters, or 24 feet) with fewer columns to get in the way of oversized cargo. ACL said the new ships’ combined emissions will be 65 percent less than the carrier’s existing fleet.

Another feature common to the new ships and the G3s is cell guides for containers on deck. ACL said it hasn’t lost a container overboard in its last 30 years of trans-Atlantic crossings.

ACL, owned by Italy’s Grimaldi Group, opted for a new series of con-ro ships in order to target higher-paying cargo in both the container and ro-ro segments, and to hedge its exposure to the vagaries of the trans-Atlantic container market.

Trans-Atlantic rates plummeted last year after carriers added capacity just as weak Europe demand and the strong dollar were cutting into volumes, but rates reportedly have strengthened somewhat with the withdrawal of some capacity.