ACL gears up in weak trans-Atlantic market for containers, ro-ro

ACL gears up in weak trans-Atlantic market for containers, ro-ro 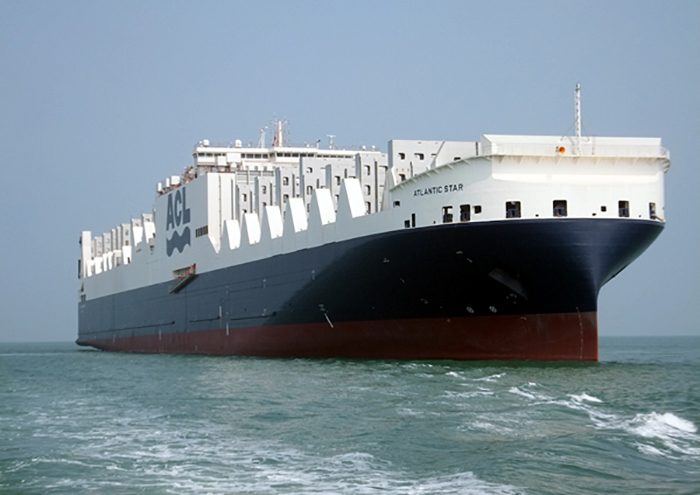 The ACL Atlantic Star is the first of the G4 class ships, whose combination of container and roll-on, roll-off capacity has helped the liner get through the onging downturn in the container sector.

This is a transitional year for Atlantic Container Line, which is replacing its fleet of container/roll-on, roll-off ships in a difficult environment for carriers in the U.S.-North Europe trade.

The fourth of the new ships is due in September, and the final one is expected to join ACL’s fleet by year end, several months behind the original target. Having ships with uniform capacities and speeds will simplify planning and operations, CEO Andrew Abbott told JOC.com. “Right now it’s small ship, big ship, small ship,” he said.

Unfortunately, the new ships’ arrival coincides with a trans-Atlantic market that Abbott said is the worst he’s seen.

Trans-Atlantic container rates from the U.S. to Europe are “well below” $1,000 per forty-foot container, he said. “Westbound, they’re in the low four digits, whereas at one time they used to be in the $2,000-plus zone. This is crazy. It’s not sustainable.”

New York-to-Rotterdam spot rates last month fell to $422 per FEU, and Rotterdam-to-New York rates hit a five-year low of $1,821 per FEU in April, according to Drewry’s World Container Index, available on the JOC Market Data Hub.

Trans-Atlantic capacity has risen as global carriers have cascaded excess tonnage into the trade. Abbott said the trade has 16 to 17 percent more capacity than at the start of 2015, and that one time it was up by 30 percent.

Volume, meanwhile, is soft. “We haven’t had a good export year in eight years,” Abbott said. “Since the European Union went into this austerity mode and the dollar strengthened, it’s been really difficult for American manufacturers to sell anything to Europe.” U.S. imports also are feeling the effects of a sluggish global economy.

ACL has been spared some of the pain because of the diversification its con-ros provide. “We’ve been bucking the trend on all of this, but if we were a pure container carrier, we’d be losing our shirt,” Abbott said.

Though rates are weak, the modest container capacity on ACL’s ships enables the carrier to be be selective about the cargo it accepts. And although ro-ro shipments of heavy equipment are slumping, automobile shipments have been healthy.

ACL is counting on its new ships to provide an additional edge.

Since the mid-1980s, ACL has operated G3-class con-ros that carry up to 1,850 twenty-foot equivalent units of containers, in addition to ro-ro cargo. The new ships will carry 3,800 TEUs, along with 1,307 cars, a 31 percent increase, and 28,900 square meters for large ro-ro cargo or containers, a 45 percent increase.

The additional capacity was made possible by an innovative design that puts containers in fore and aft cells, and stows ro-ro cargo amidships. The old ships carried ro-ro cargo on lower decks, and required as much as 14,000 tons of ballast water to ensure stability. The new ships require little if any ballast.

ACL has had no trouble filling the G4s’ additional container slots, Abbott said. For years, ACL had to allocate limited space on its ships. “Now we’re finding that because we can accept more, existing customers are giving us more,” he said. “Customers who were giving us 10 container a week now are giving us 30.”

The G4s also create opportunities for ro-ro cargo. The old ships have fixed, separate compartments for cars and larger ro-ro shipments, and have limited capacity to handle sports utility vehicles. The new ships have moveable decks that are tall enough to carry SUVs and can be adjusted to handle fluctuating demand for cars and other ro-ro cargo.

The new ships’ ro-ro decks have a single center column, which provides simpler stowage than the two or three on the older ships’ decks. The ships’ ramps also are less steep, which allows them to handle larger pieces of ro-ro cargo.

As it phases in the new ships, ACL has purchased additional space from Hapag-Lloyd and Mediterranean Shipping Co. during weeks when the lower-capacity older ships are operating.

ACL and Hapag-Lloyd have exchanged slots on each other’s ships continuously since the mid-1980s, when they filed the first slot-exchange agreement with the U.S. Federal Maritime Commission after enactment of the 1984 Shipping Act.

The carriers’ weekly slot exchange is being increased gradually from 550 TEUs a week, and probably will top out at about 1,000 TEUs weekly when all of ACL’s new ships are in place, Abbott said.

The agreement is a simple slot exchange — each carrier operates its own ships and exchanges a specified number of slots on the other’s vessels, with no money changing hands. “We treat them like our best customer, and they treat us like their best customer,” Abbott said.

The agreement provides ACL with access to U.S. South Atlantic and Gulf ports that Hapag-Lloyd serves, and provides Hapag-Lloyd with direct calls at ACL ports such as Liverpool, Baltimore and Gothenburg. At Antwerp, New York-New Jersey and other ports that both lines serve, ACL and Hapag-Lloyd can offer a second weekly call.

During its transition to the new ships, ACL also has chartered westbound space on vessels of Mediterranean Shipping Co., another carrier with which ACL has a longtime relationship. In addition, ACL has temporarily chartered a container ship with effective capacity of about 3,500 TEUs.

Abbott said ACL is studying whether it could extend its Halifax-to-Norfolk range of North American ports into the South Atlantic while still maintaining weekly service. He said that decision has been put off until the carrier gets a better feel for how its new ships operate.

For a few years after the company’s acquisition in 2001 by Italy’s Grimaldi Group, ACL relayed cargo via Antwerp to Grimaldi’s ro-ro services to West Africa and to the Mediterranean. Grimaldi eventually developed enough volume on those routes to establish direct ro-ro services between U.S. ports and those regions. ACL still relays cargo via Grimaldi's Finnlines to Russia and Finland, and on intra-Europe feeders.

Abbott said ACL, formed in the mid-1960s by several European carriers at the dawn of international containerization, is happy with its place in the market. He said the average tenure of ACL's staff is 17 years, and that the carrier is large enough to serve big customers but small enough to provide hands on-service to shippers who book containers in "ones and twos."

“We’ve always taken the position that if you want to be successful, you’ve got to be different from everyone else,” Abbott said. “We’ve always tried to go to different ports, carry different cargo, do things others can’t do, and it’s given us a niche.”