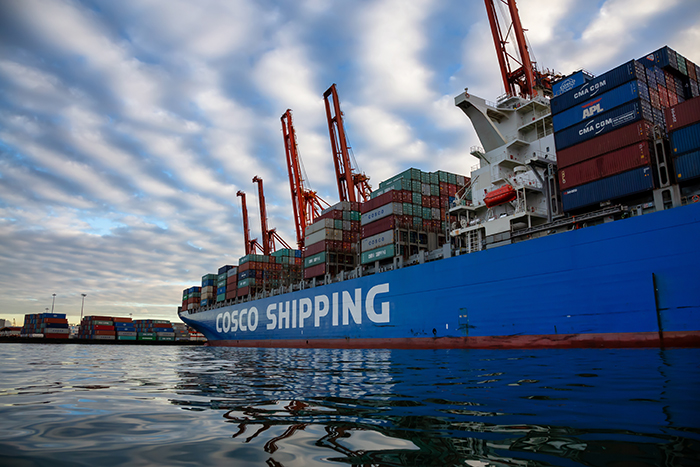 Following the unveiling of new strategies by their European counterparts, more Asia-based container lines are revealing their own plans that tilt toward deeper logistics services beyond conventional ocean shipping.

With slowing global trade, rising operating costs, and growing demand from customers for better quality services and added value, reaching deeper into landside logistics gives carriers greater control over their container supply chains. It is a path being followed by Maersk Line and CMA CGM as they try to reduce vulnerability to volatile ocean transport revenue and cost with a goal of becoming less dependent on freight rates.

China’s Cosco Shipping clearly outlined its strategy of building its own end-to-end logistics capabilities in its 2018 financial results statement, released Friday. The state-owned carrier reported a 2018 net profit of $183 million thanks in large part to an 8.7 percent year-over-year increase in total transport volume to 18.37 million TEU. Its container terminal division, Cosco Shipping Ports, handled 120 million TEU in 2018, a year-over-year increase of 21 percent.

The logistics strategy of Cosco Shipping is largely focused around China’s Belt and Road trade initiative that links the markets in Asia with those in Europe, the Middle East, and Africa. Most of the terminals Cosco controls or has invested in are at ports along the Asia-Europe, Asia-Middle East, and Asia-Africa routes, with a total of 283 berths in operation — 192 for containers with a combined annual handling capacity of 106 million TEU. Two new berths are also being added to the joint Cosco-PSA International terminal in Singapore.

But it is along the China-Europe rail route where Cosco has been cementing its land-based logistics offering. The carrier in 2018 launched several train services in partnership with China Railway Corporation and by the end of 2018 had services on 112 trains departing China for international destinations and 152 domestic train services. Cosco has also introduced what it calls the China-European sea-rail express. Based in the Greek port of Piraeus, the sea-rail service handled 50,000 TEU in 2018, a year-over-year increase of 27 percent.

Also expanding its logistics capabilities is OOCL, acquired by Cosco Shipping in mid-2018. The Hong Kong-based carrier, which reported an 8.4 percent increase in volume to 6.5 million TEU in 2018, is using its OOCL Logistics unit to develop new end-to-end transportation services.

Leveraging its parent’s deep involvement in the China-Europe rail network, OOCL is including more countries in Central and Eastern Europe into the China-European sea-rail express service. The focus of these services is on integrated logistics solutions right up to the last mile.

The CEO of Japan’s Ocean Network Express (ONE), Jeremy Nixon, has said on numerous occasions that his carrier would eschew the integrated service model in favor of a focus on traditional ocean transport and customer service. However, ONE — the merged container divisions of Japanese shipping groups NYK Line, MOL, and “K” Line — has terminal holdings in Asia, Europe, and Australia, and a new container terminal joint venture (JV) with PSA in the carrier’s operating headquarters of Singapore will give ONE greater control of its volume in the busiest transshipment port in the region.

Not all Asian carriers are following the logistics-controlling route, or have the ability to do so, preferring to place greater focus on customer service and providing more reliable ocean transport.

One of those is HMM, which said this week that to improve its customer focus it had appointed as CEO Jae-hoon Bae. Bae has many years of experience as a carrier customer, having held executive positions at Pantos Logistics, LG Electronics, and LG Semicon Americas.

It is unclear whether the loss-making HMM, which hasn’t turned a quarterly profit since 2012, will focus on core container services under Bae’s leadership, build supply chain management capabilities, or forge an entirely new path.

Another carrier focused on finding a way back to profitability is Taiwan’s Yang Ming Line, which reported a net loss of $218 million for 2018, citing a 31 percent year-over-year jump in bunker fuel prices. The higher operating cost more than offset an 8.2 percent increase in revenue, driven by 11 percent more volume than in 2017. In its earnings statement, the carrier highlighted slowing global trade and rising low-sulfur fuel costs as its chief concerns for this year.