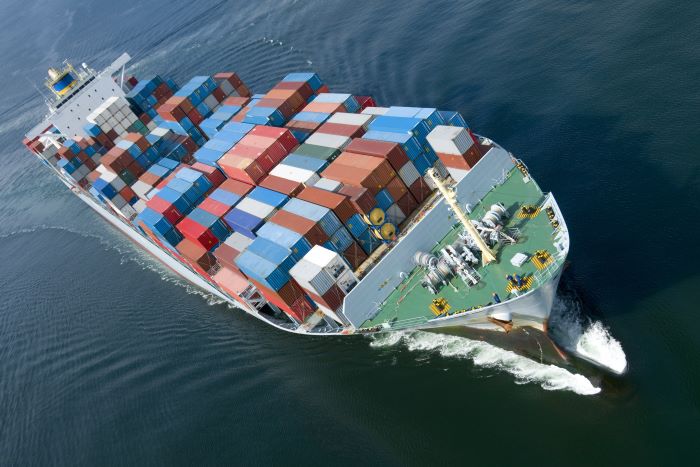 US imports from Asia declined 0.7 percent through November this year compared with 2018, while imports from China were down 7.8 percent. Photo credit: Shutterstock.com.

Trans-Pacific carriers through mid-December have announced post-Lunar New Year blank sailings that far exceed the average number of canceled sailings known at this point each year for the past seven years. And in the next week or two, they could post additional blankings that would take effect in February.

Carriers cancel scheduled sailings when cargo volumes are trending lower and forward-looking bookings also appear to be weak. Both factors are at play today in the eastbound trans-Pacific as imports from Asia have declined during the almost two-year long United States-China trade war.

US imports from Asia declined 0.7 percent in the first 11 months of 2019 compared with 2018, according to PIERS, a JOC.com sister company within IHS Markit. Year-over-year imports from China declined 7.8 percent during that period.

“Things have slowed down quite a bit. We will go into Chinese New Year very slowly,” Jon Monroe, a consultant to freight forwarders in the Asia-North American trades, told JOC.com Tuesday.

Sunday Spotlight, which is published weekly by Sea-Intelligence Maritime Consulting, tracked blank sailings that have been announced by vessel-sharing alliances and individual carriers to take effect beginning in February 2020 when many factories will be closed for a week or two during Asia’s annual Lunar New Year celebrations beginning Jan. 25.

Vessel sizes have increased considerably since 2013, so Sea-Intelligence measures capacity reductions in TEU capacity that is removed from a trade lane and translates the TEU reduction to “average-size vessels” in order to provide continuity over the seven-year period.

In recent weeks, trans-Pacific carriers have announced blank sailings to take effect after Jan. 25 totaling 137,800 TEU, which is the highest capacity reduction over the past seven years “by a considerable margin,” said Alan Murphy, CEO of Sea-Intelligence. By this time in previous years, carriers had announced an average reduction in capacity of about one-third what they have announced so far this year.

The timing of Lunar New Year in Asia varies from year to year. Jan. 25, 2020 will be a week to two weeks earlier than usual. The early new year should be an incentive for factories in Asia to begin pushing cargo out to US retailers and manufacturers in mid- to late-December, but that is not happening now, due to a slowing US economy and Trump administration tariffs on imports from China.

“I see this every day,” Monroe said. “There are no space problems [on vessels leaving Asia].” Excess capacity in the eastbound trans-Pacific means few, if any, shipments are being “rolled” to subsequent voyages, which is pushing down spot rates in the Asia-North American trades.

In past years, the first cluster of announcements concerning blank sailings came seven weeks before the beginning of the Lunar New Year, and that was followed several weeks later by a second round of announced blankings.

“Given historical trends, shippers should expect the bulk of these announcements to come ... four weeks prior to Chinese New Year,” Murphy said. Last year, trans-Pacific carriers reduced total capacity to the West Coast by 254,000 TEU during the post-Lunar New Year weeks. Previous reductions going back to 2013 ranged from 129,000 to 216,000 TEU.

If carriers are to match the total 2019 capacity reductions to the West Coast, they need to announce further blank sailings totaling only 100,400 TEU in the coming weeks, “which translates to roughly 12.4 average-sized sailings,” Murphy said. If carriers are to match the 2013-19 average, they need to announce only a further 80,000-TEU reduction in capacity for the post-new year period, which translates to 9.9 average-sized sailings, he said.

Trans-Pacific carriers so far have announced post-Lunar New Year blank sailings to the East Coast totaling 72,200 TEU. If carriers in 2020 are going to match their total capacity reductions in 2019, they need to announce an additional 46,000-TEU reduction in capacity, which translates to 5.1 average-sized sailings, Murphy said. If the 2013-19 average reduction to the East Coast is to be matched, carriers need to reduce an additional 43,300 TEU in capacity, or 4.8 average-sized sailings, he said.

While it is logical to assume carriers in the next couple of weeks will announce additional blank sailings, given the downward trend in US imports from Asia and in spot rates, Murphy said no one can make such predictions right now. In fact, there is a possibility that carriers have front-loaded their announcements of blank sailings given the reductions in capacity that are already being caused by the International Maritime Organization’s (IMO's) global requirement for low-sulfur fuel oil (LSFO) beginning Jan. 1.

Due to the IMO 2020 requirement, carriers have already been taking individual vessels out of service for a week to flush high-sulfur fuel from their tanks and replace it with LSFO. That process will continue into the new year as carriers comply with IMO 2020.