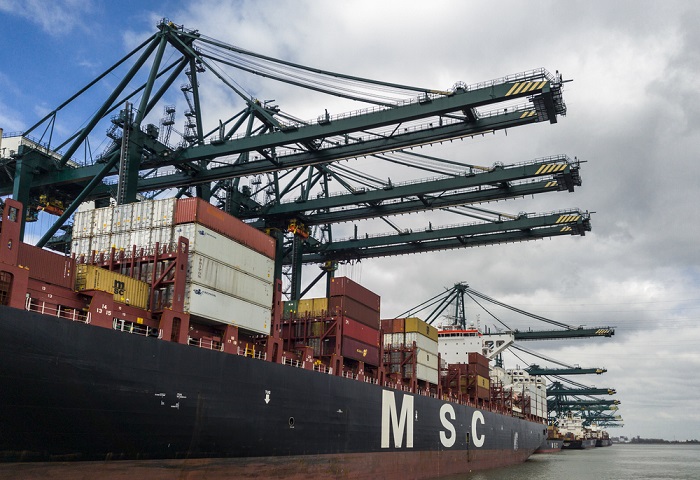 The 2M Alliance of Maersk Line and MSC has reinstated its mega-ship operating AE2/Swan service on the Asia-Europe trade, which is likely to keep rates under pressure despite an increase in volume. Photo credit: Shutterstock.com.

Carriers focused on higher bunker costs and the impending low-sulfur fuel regulations will be welcoming the return of demand growth on the Asia-Europe trade as annual contract negotiations get under way.

The latest data show container volume was up 7.8 percent in September compared with the same month last year, and then grew by 5.4 percent October, according to Container Trades Statistics.

Volume growth fell from May through August, so the return of demand will be a relief for carriers seeking to improve their profitability having struggled to arrest a freight rate decline that began in late August and continued through the peak season.

But the improving trade comes amid surplus capacity and mounting political uncertainty in the region. The United Kingdom, the largest importing country in northern Europe, is heading steadily towards a chaotic “no deal” exit — or Brexit — from the European Union, fewer imports from France as it faces violent protests, and slowing demand from a sanctions-hit Russia will continue to undermine the European market.

Capacity deployed on the trade has also grown with the 2M Alliance’s AE2/Swan mega-ship service back in operation since early December. Drewry noted in its Container Insight Weekly that the return of the service would likely suppress any freight rate momentum that was crucial for lines during annual contract negotiations.

On Asia-Europe, forwarders handle a greater share of the cargo and contract talks than on other trades, and the duration of contracts can be from three months to 12 months. While most of the contracts will begin in January, not all shippers and forwarders believe the run up to Christmas is the best time to negotiate.

“But we only begin negotiations after Chinese New Year when the rate goes down, and our year will run from April to March,” he told JOC.com. “It is the best time to negotiate rates. If we do it before then it is a peak time and we will get much higher rates because the carriers are full.”

This was a similar approach used by a UK-based high street retailer. The company’s supply chain director told JOC.com that he negotiated 12-month contracts with a range of carriers on Asia-Europe and they ran from April to March.

Shippers with 12-month contracts starting in January include a manufacturer whose Asia-Europe volume is part of the 500,000 TEU moved around the world every year. He spreads the containers across many different carriers with nothing left to the spot market.

The shipping manager for a northern Europe clothing brand said his 12-month contracts also ran from January to December with no exposure to the spot market, and global forwarders handled 90 percent of the annual volume.

Drewry expects spot rates to remain stable through the end of the year as the injection of capacity will likely be covered by greater demand, with carriers looking for a small rise in contract rates for next year. But the analyst said the carriers were more intent on convincing the market of the need to share the fuel burden arising from the IMO 2020 rules.

The International Maritime Organization’s (IMO's) low-sulfur fuel regulations will require a 0.5 percent sulfur cap on marine fuel, a rule that is expected to add an additional $11-15 billion to the annual industry fuel bill. Carriers have said there is no way they will shoulder the costs and have devised various bunker adjustment surcharge formulas to manage the higher costs of the cleaner fuel.

Several carriers have outlined the impact the cleaner fuel will have on their costs, which analysts estimate could be as much as 50 percent higher. While scale of the cost hitting carriers and shippers is slowly coming into view, carriers privately worry about their ability to pass on the costs to customers.

CMA CGM expects the low-sulfur fuel consumption will raise per-TEU cost by $160. Hapag-Lloyd has issued a range of estimates from $115 to $333 per TEU. Maersk Line estimates its bunker adjustment factor (BAF) will add between $90 and $1,050 to the cost per FEU.

Ocean carriers’ efforts to meet the rule are challenged further by the uncertainty in the oil market and the uncertainty of how that will affect bunker fuel prices and availability. IHS Markit energy analysts predict a “scramble period” of up to a few years when a new equilibrium of supply and demand will be determined by refiners and shipowners. This could result in the price of low-sulfur bunker fuel hovering around $680 per ton in 2020, up more than 30 percent compared with the current price of high-sulfur bunkers.