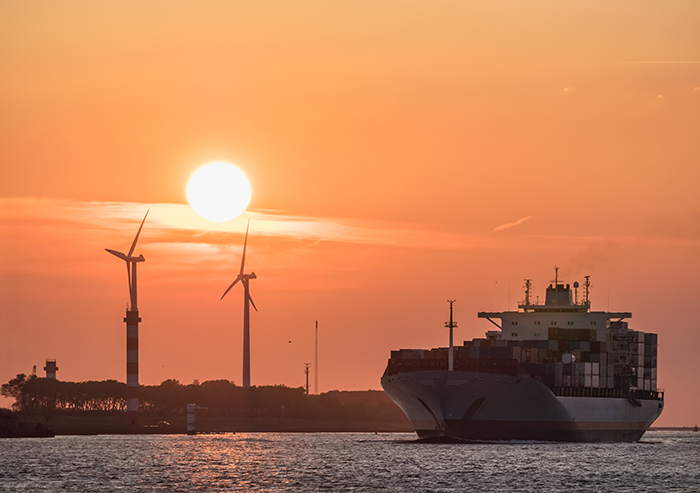 With the Lunar New Year rush over, a clearer picture of the global container shipping market's health is emerging.

Spot rates on the Shanghai-Europe trade staged their first sharp drop this year, declining almost 11 percent and falling below $1,000 per 20-foot-equivalent unit for the first time in 10 weeks despite tightly managed capacity by container lines.

The Shanghai-Europe rate fell by $110 to $913 per TEU, a level it has not seen since the beginning of December, according to the Shanghai Shipping Exchange’s Shanghai Containerized Freight Index, tracked weekly on JOC.com’s Market Data Hub. On the Asia-Mediterranean trade, the rate lost $112 and stood at $876 per TEU this week. 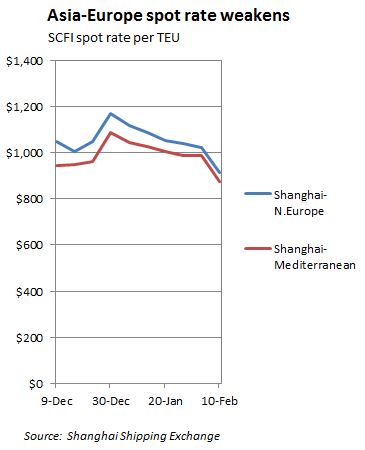 With factories in China closed for the past two weeks, demand for containerized transport has been low and only the deep capacity cuts by shipping lines blanking sailings has kept freight rates from falling. Yet the greater drop in spot rates suggests that weak demand may be overpowering carrier efforts to limit capacity, something that doesn’t bode well for liner profitability considering the slack period will continue into March.

Container lines have enjoyed strong volume increases during the fourth quarter, with capacity cuts helping push up spot rates to levels not seen for six months. The improved fourth quarter gave the carriers an injection of confidence that has long been absent, and leading the optimistic charge was Maersk Line CEO Soren Skou who believes the industry has reached an inflection point.

Announcing Maersk Line’s $376 million loss this week, Skou was bullish in his expectations for the carrier this year, forecasting a $1 billion improvement over the 2016 result, which would mean a profit of more than $600 million this year.

His rationale is that the carrier entered 2017 with good momentum, tightly managing and gaining market share through 2016, and is poised to benefit from global container shipping demand that is expected to increase by around 2 to 4 percent.

That demand, however, is unlikely to be generated in the first quarter, with spot rate declines likely to accelerate on Asia-Europe. This point was made by another Maersk Line executive, CFO Pierre Danet, who said even with the positive developments in the second half of 2016, and especially in the fourth quarter, freight rates remained depressed and unsustainable, and capacity would continue to be tightly managed.

This more disciplined management of capacity has led to blanked sailings being at their highest level in four years, according to SeaIntel Maritime Analysis CEO and partner Alan Murphy. But he said low rates in the first three months of the year would come bouncing back in the second quarter.

“Based on patterns of spot rate developments in past years, we are expecting spot rates on Asia-Europe and trans-Pacific to drop 15 percent to 20 percent in the coming weeks, but second-quarter spot rates we estimate to be up 90 percent to 150 percent year-over-year on Asia-Europe,” he said.