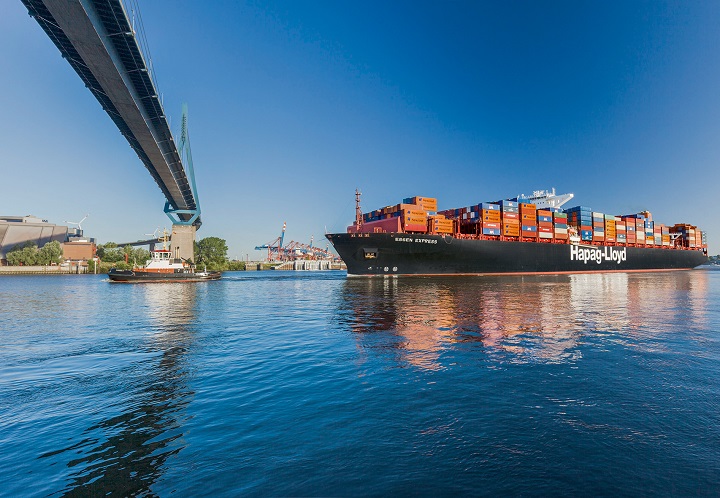 Hapag-Lloyd wants a significant increase in spot rates on the Asia-North Europe and Asia-Mediterranean trades from June 1. Photo credit: Hapag-Lloyd.


Rate increase announcements are starting to come in from carriers on the Asia-North Europe and Mediterranean trades as a steadily rising bunker fuel price increases unit costs and undermines profitability.

Bunker fuel prices have been rising steadily since July last year, but the price of ISO 380 bunker fuel has jumped another 21.4 percent since the beginning of April to an average of $452.58 per metric ton across the ports of Shanghai, Rotterdam, and New York-New Jersey as of May 17, according to IHS Markit data.

The impact of the rising bunker price was clearly illustrated in Maersk Line’s first-quarter results, where the amount spent on bunker fuel (including Hamburg Süd) reached $1,194 billion, an increase of 52 percent and a third of the total 2017 spend on bunkers. This pushed unit costs up by almost 9 percent.

With such an assault on unit costs, the scale of the freight-all-kinds (FAK) increases proposed by Hapag-Lloyd and CMA CGM on the Asia-North Europe and Asia-Mediterranean trades are hardly surprising, but their success is unlikely considering where the rate currently stands.

Spot rates on Shanghai-Rotterdam ended a three-week positive stretch and declined by $18 to $793 per TEU, according to the latest reading of the Shanghai Shipping Exchange’s Shanghai Containerized Freight Index. The weekly rate movements are tracked on the JOC Shipping & Logistics Pricing Hub, which shows that the spot rate remains well below where it was at this time a year ago. Shanghai-Mediterranean rates performed slightly better, rising $12 to $795 per TEU in the fourth week of increases. However, this rate is also well below the comparative week last year.

While reaching these proposed levels is unlikely in the currently oversupplied market, carriers are starting to reexamine the way freight rates are viewed. Hapag-Lloyd CEO Rolf Habben Jansen questioned the freight rate market price, and said while there were customers that shipped purely based on price, container shipping was not fully commoditized like the oil business.

“If you want to buy a barrel of Brent oil today then you will pay around $70 a barrel because there is a market price,” he said at the Global Liner Shipping conference in Hamburg. “But a ship that sails between Shanghai and Rotterdam, you will still find a price variance among the rates of 15 to 20 percent. We are not in a fully commoditized market.

Maersk Group said in its first-quarter results announcement that the carrier will become less dependent on freight rates as it drives up its non-ocean business with the goal of becoming a integrated provider of global container logistics. This came through in the results, but the focus on offering end-to-end logistics is a move that has triggered a debate about where and how container carriers will compete with forwarders.

“The customer wins and strong pipeline [in logistics services] is part of the execution of the strategy of providing customers with end-to-end solutions,” it said in the interim report. That is a direction that mirrors that of CMA CGM, which in April announced plans to acquire a 25-percent stake in logistics provider Ceva — also with an eye on growing in the end-to-end market. However, it is not a strategy that has yet been followed by other major carriers Mediterranean Shipping Co. and Hapag-Lloyd.