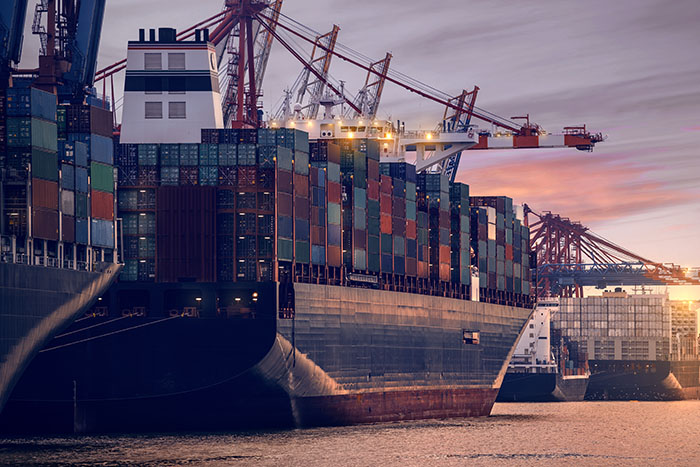 Container spot rates on the Asia-Europe trade were on the rise thanks to aggressive capacity management by carriers through the fourth quarter, but the demand required to sustain the rising prices is still missing.

As of Dec. 6, 2019, rates from Asia to North Europe had risen 3.4 percent year over year to $800 per TEU, according to the Shanghai Containerized Freight Index (SCFI), but volume growth has been slowing since May, according to data from Container Trades Statistics (CTS). Westbound Asia-Europe shipments inched up 0.7 percent year over year in October, the latest month for which figures are available, after dropping 3.4 percent in September. Through October, European containerized imports from Asia were up 3.8 percent compared with the same 10-month period in 2018, according to the CTS figures.

Carriers are getting little support from the major European economies. Germany and the UK have been flirting with recession, while Italy reported almost zero economic growth in the third quarter. IHS Markit’s Purchasing Managers Index (PMI) surveys show uncertainty over Brexit is placing a drag on the UK manufacturing sector, and in Germany the declining autos and auto parts market, a huge vertical that drives demand for air and ocean shipments, continues to record the steepest declines in manufacturing output of all sectors. The only silver lining was that the German decline in manufacturing output, new orders, and exports slowed in October, indicating that the auto slowdown may have bottomed out. IHS Markit is the parent company of The Journal of Commerce.

Spot prices rose through November as capacity was withdrawn and freight all kinds (FAK) rate increases were levied by some carriers, causing the spot market to rebound strongly from its mid-October low. The restriction of capacity is likely to continue into 2020 as carriers continue to take vessels out of service to clean out fuel tanks or fit them with scrubbers ahead of the International Maritime Organization’s (IMO's) low-sulfur fuel requirement that begins Jan. 1, 2020.

Alphaliner reported the number of inactive ships undergoing scrubber retrofits remained high through mid-November, with a total of 65 units comprising 619,189 TEU being fitted.

According to Rahul Kapoor, vice president and head of research and analytics at IHS Markit’s Maritime & Trade division, rates might be lifted by the removal of this capacity, but any pricing increase would be restricted by a lack of demand growth. “We don’t expect a big uptake in demand over the next few quarters, when it will continue to be lackluster. Hopefully by late 2020 we will see an overall increase in demand,” he said, noting the ripple effect of the tensions between the United States and its trading partners, China in particular. “What creeps into [European] manufacturing numbers is the US-China trade war. The trades are all interrelated.”

In tandem with the scrubber fitting and tank cleaning, capacity also is being withdrawn from Asia-North Europe and Asia-Mediterranean through the blanking of sailings. Over November through January, carriers will cancel at least 24 sailings on the trades in a bid to better match capacity with slowing demand. Most of the blanked sailings are within services offered by the Ocean Alliance and THE Alliance, although 2M carriers Maersk and Mediterranean Shipping Co. have extended the suspension of their joint AE2/Swan service until January.

But taking out capacity to match weakening demand is only a short-term solution, and real concern is building among carriers as they look toward 2020. Even Maersk, which reported a profitable third quarter and upgraded its EBITDA expectations for 2019 to between $5.4 billion and $5.8 billion from $5 billion previously, has lowered its global volume predictions to be in line with or slightly lower than the 1 to 2 percent expected market growth that it previously assessed at 1 to 3 percent.

Maritime analyst Drewry also has downgraded its full-year expectations for global container demand. The analyst began the year with a prediction of 3.9 percent growth but has twice revised that downward to its current forecast of 2.6 percent growth.

Ocean Network Express (ONE) has lowered its full-year profit forecast by 33 percent — its financial year ends March 31 — on concerns of a further slowdown in the global economy and rising fuel costs. ONE expects Asia-Europe rates to deteriorate and demand to fall on the major east-west trades. As a result, the carrier has lowered its full-year profit projection for fiscal 2019 to $60 million, a decrease of 33.2 percent over previous guidance.

The moderating of demand expectations and resulting pressure on rates comes as carriers prepare for a significant increase in operating expenses from the switch to low-sulfur fuel in compliance with the IMO 2020 mandate. An estimated $10 to $15 billion will be added to the annual fuel bill of carriers, and they are determined to pass on those costs via bunker adjustment factors (BAF) for contract cargo, and low-sulfur surcharges for the spot market.

Maersk CEO Søren Skou said during the carrier’s third-quarter earnings call he had “high confidence” that the rising costs of the low-sulfur fuel 90 percent of the company’s fleet would be using would be entirely passed on to customers. “We will start applying the environmental fuel surcharge [EFS] on the spot bookings from Dec. 1, and we are just starting in the contract season where we will seek to get the low-sulfur cost increases included,” Skou said.

After months of speculation, the surcharge cost per container shippers can expect to be applied to their spot market cargo on the major trades finally is beginning to come into view. According to the low-sulfur fuel tariff calculator provided by CMA CGM and surcharge levels announced by HMM, China-North Europe shipments will face the highest additional cost as a percentage of the spot rate at about 16 percent, while the China-US trades range from 7 percent to 14 percent. The surcharges are based on the spread between the price of high-sulfur and low-sulfur fuel through October, so how they play out over the next few months will depend on whether that spread widens.

However, while carriers prepare for the low-sulfur switch, and networks are adjusted and sailings canceled to try to match falling demand, their customers already are feeling the effects.

Andrew Gillespie, director of global logistics at Ansell Healthcare Products, said even if rates remain at their low levels, Ansell’s overall transportation costs are being pushed up by carrier actions. “There are a lot of 20,000-TEU vessels being launched, and that means less services and bigger vessels, and that means I have more containers on each vessel,” he said in a recent Journal of Commerce webinar. “That means I have more containers being received by a warehouse than in the past, and that is creating bottlenecks. I can have 35 containers on a single vessel and a single arrival, and that is a big increase from the past. We are seeing our total transit time increase, and because of this, the inventory costs, handling costs, and the storage costs have increased.”

Gillespie said there are only so many containers Ansell’s warehouses can handle in a day, and the company has been forced to increase its capacity to receive cargo or bear the brunt of the extra time required. “I don’t think rates will change all that much,” he said. “but our total costs will go up.”