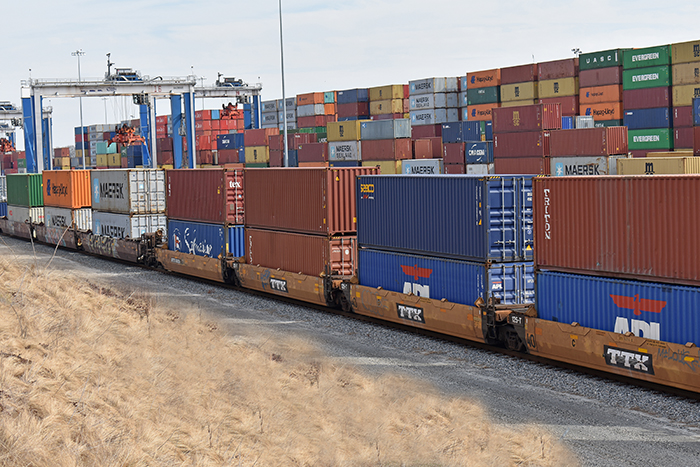 APL in mid-March will add a rail component to its Eagle Express X (EXX) service that the carrier says will deliver containers from Shanghai through Los Angeles to interior rail hubs, as many of those interchanges between western and eastern railroads have experienced congestion flare-ups.

The EXX RailFlash service will guarantee expedited inland service at a time when average rail container dwell times in Los Angeles-Long Beach have almost doubled to five days. Intermodal services of western and eastern railroads have been thrown off by harsh winter weather and congestion at rail ramps in the Chicago area. Matson Navigation Co. offers an expedited service with a 10-day transit from China to Long Beach and since 2007 has offered guaranteed intermodal transits from Long Beach to Chicago, New York, Kansas City, Dallas, and Memphis via its Guaranteed Expedited Service product, a Matson spokesman said.

APL said the service will provide delivery to hubs such as Chicago, Memphis, Dallas, and Kansas City at least four days sooner than conventional services. APL says containers on the EXX service from Shanghai will arrive in Chicago in 16 days, versus the common 23-30-day combined ocean and rail transit, and 15 days to Kansas City, instead of the typical 20-27 days, according to its statement on Wednesday.

Guaranteeing reliable ocean service in today’s environment in the eastbound Pacific will also be a challenge, with carrier on-time vessel reliability in the eastbound Pacific in 2018 at a dismal 50 percent, according to Alan Murphy, CEO and partner at SeaIntelligence Maritime Consulting,  APL’s expedited service, for which customers pay an undisclosed premium, is promising reliable performance on the ocean, truck, and rail moves for the all-in service.

“With EXX RailFlash, the X-factor of our EXX service goes one notch up as we deliver import cargoes farther and faster to four key destinations across the US,” said Jesper Stenbak, senior vice president of APL trans-Pacific trade.

APL on Aug. 2 launched the weekly EXX service from China to its Los Angeles terminal, guaranteeing an 11-day ocean transit to Los Angeles, which is at least one day faster than most trans-Pacific services of 12 to 14 days. To further expedite the shipments, APL guarantees chassis availability at the terminal. Loaded import containers on the EXX service are discharged immediately to chassis. The terminal also provides dedicated in-out truck gates for EXX customers. “We will make the cargo available quickly. This is a premium service,” Sean Pierce, president and CEO of Fenix Marine Services, which operates the APL terminal, told JOC.com.

Truckers who are picking up EXX containers receive priority access into the terminal via dedicated bobtail gates, where the average truck turn time is about 25 minutes, APL stated in a release Wednesday. The Harbor Trucking Association, which tracks the monthly truck visit times at the 12 container terminals in Los Angeles-Long Beach, reported that in January the average turn time in the harbor was 98 minutes, the highest since the labor disruptions of late 2014-2015 during the West Coast longshore contract negotiations.

Fulfilling the promise of rapid intermodal delivery to inland destinations will also be difficult, especially to Chicago-area rail ramps, which have experienced delays due to high traffic volumes and service disruptions through snowy, frigid conditions in the Plains states and upper Midwest. Memphis has also experienced rail delays, generated in part by chassis shortages.

Stenbak stated that the EXX service is based upon guaranteed equipment and vessel space at load ports in China, fast and reliable ocean transit to Los Angeles, and APL’s ability in “navigating the North American equipment and transportation crunch.” Bookings for the EXX RailFlash service will be available for shipments sailing from Shanghai on March 14 onwards, APL stated.

Terminal operators in Los Angeles-Long Beach, which handle about 38 percent of US containerized imports, according to PIERS, a JOC.com sister product within IHS Markit, are just now beginning to recover from a severe bout of congestion in their container hand-offs to both rail and truck carriers. The four months of congestion were caused largely by front-loading of imports as retailers and manufacturers contended with the uncertainties of Trump administration tariffs on more than $200 billion of imports from China. The possibility of tariffs has been delayed for now as talks continue between the US and China, and the Global Port Tracker published by the National Retail Federation and Hackett Association predicts year-over-year growth in US imports this spring.

Global Shipping Outlook: A Sneak Peek at 2021
Port Performance North America: Managing Cargo Flow During a Pandemic — and Beyond
END_OF_DOCUMENT_TOKEN_TO_BE_REPLACED