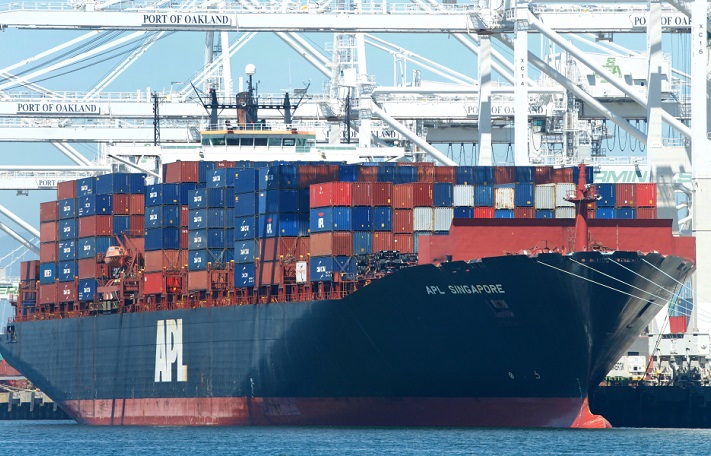 Through the expansion, APL said shippers importing from new, nondirect loading
Asian and Middle Eastern ports will have guaranteed equipment at origin
and a slot on the ship, and the same ensured transit even though goods will be transshipped.
Photo credit: Shutterstock.com.

APL is doubling down on its guaranteed and expedited service to the United States by expanding the offering to all services from Asia and the Middle East. That gives US importers from elsewhere in Asia the ability to ensure their cargo won’t get delayed in the import rush of Chinese goods ahead of higher tariffs starting Jan. 1.

The Eagle GO Guaranteed Service — targeting shippers willing to pay premium rates for a faster and guaranteed service that provides a complete refund if the ocean carrier fails to meet the delivery date — will expand from 29 Asia ports to 150 Asia and Middle East ports. Through the expansion, shippers importing from new, nondirect loading Asia and Middle East ports will have guaranteed equipment at origin and a slot on the ship, and the same ensured transit even though goods will be transshipped.

“Unlike the traditional peak, the current trading season on the trans-Pacific has been exacerbated by advanced shipments to the US,” Jesper Stenbak, APL senior vice president of trans-Pacific trade, said in a statement. “To help shippers manage capacity shortage in the market, this pay-on-demand offering will bring them certainty in their supply chain.”

It’s unclear, however, just how much strength the trans-Pacific peak season has. Some importers will try to beat the Jan. 1 deadline when tariffs on roughly $200 billion of Chinese imports increase from 10 percent to 25 percent. Others, however, won’t be able to ramp up production in time, particularly since most factories closed during Golden Week, which ran from Oct. 1 to 7.

The expansion comes after APL on July 1 extended the premium offering to Asia-Europe and Asia-Mediterranean trades, following implementation of the shipping option on the trans-Pacific, trans-Atlantic, and Oceania routes. The Asia-Europe offering gives shippers of time-sensitive cargo guaranteed space on 13 Europe-bound services from 27 Asia ports.

In an era of overcapacity and relentless pressure on freight rates, carriers are attempting to differentiate their presence in the major east-west trades by offering value-added services, but their attempts are not always successful. Maersk Line five years ago introduced its Daily Maersk product in the Asia-Europe trade, only to discontinue the service later.

Container lines have occasionally developed time-definite business arrangements with importers of certain products when they have a critical mass of shippers at designated destinations. But APL has broadened the offering to any shipper that qualifies for the program.

Container Shipping: The Year Ahead
Learn how IFP Corp uses technology to improve operational efficiency and improve margins
US Offshore Wind: Where Is the Market Heading?
END_OF_DOCUMENT_TOKEN_TO_BE_REPLACED