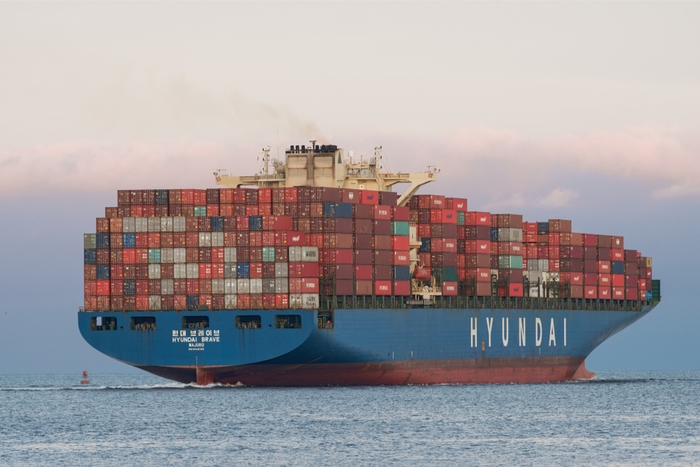 HMM believes full membership in THE Alliance will give it an opportunity to maximize its competitiveness as a dozen new mega-ships join the fleet this year. Photo credit: Shutterstock.com.

HMM’s 12 ships of 23,000 TEU capacity will be quickly put to use by THE Alliance when they start coming online in the second half of the year, meant to replace an 11-vessel string of 15,000 TEU units currently deployed by Hapag-Lloyd on the FE4 Asia-North Europe service, according to Alphaliner.

The Korean flagship will join THE Alliance as a full member in a 10-year agreement, teaming up with Hapag-Lloyd, Yang Ming, and Ocean Network Express (ONE) when the carrier exits the 2M Alliance of Maersk Line and Mediterranean Shipping Co. where it has been a strategic partner for the last three years.

HMM said full membership in THE Alliance would give the carrier “the best opportunity to maximize its competitiveness” as the mega-ships are delivered and improve its environmental performance. The containership orderbook of HMM stands at 398,400 TEU, the industry’s second-largest behind CMA CGM at 433,744 TEU.

Alphaliner said the revision of the FE4 loop was expected to be part of a wider reshuffle of the current five Asia-North Europe and three Asia-Med loops operated by THE Alliance. The three carrier alliances are expected to announce their 2020 network revisions in the coming weeks.

Alphaliner said a draft schedule of the revised FE4 service shows that the rotation would be 12 weeks with Asia coverage extended to Qingdao and Busan, and European calls including the Spanish hub of Algeciras in both directions, enabling HMM to also load Asia-Med cargo on the loop.

Hapag-Lloyd CEO Rolf Habben Jansen and ONE CEO Jeremy Nixon, after the announcement was made in the second half of 2019, said HMM’s new and modern mega-ships would allow for expanded service offerings, wider port coverage, and reduced carbon dioxide (CO2) emissions.

The mega-ships of HMM will add capacity to an already heavily supplied Asia-Europe market. Despite the global orderbook for container vessels declining to 11 percent of the fleet, down from 35 percent in 2010 and 60 percent in 2008, the larger vessels will only be able to serve hub ports on the Asia-Europe trade where carriers are scheduled to take possession of 150 ships of 10,000 to 22,000 TEU before 2020-21​.

The latest forecast by IHS Markit predicts container volume on Asia-Europe will rise 2.6 percent this year and 5.5 percent in 2021.

After narrowly dodging the bullet that took down Hanjin Shipping in 2016, a condition of financially strapped HMM’s debt restructuring was that it join one of the global alliances. While 2M declined to take on HMM as a full member, the Korean carrier became a strategic partner in an agreement that expires April 1.

But even with its 2M partnership, HMM has struggled to return to profitability. It is too early for the full year 2019 results, but in the third quarter of last year, revenue growth of 1.5 percent to $1.24 billion was overwhelmed by a 10 percent decline in spot rates through the quarter that led to an operating loss of $40 million.