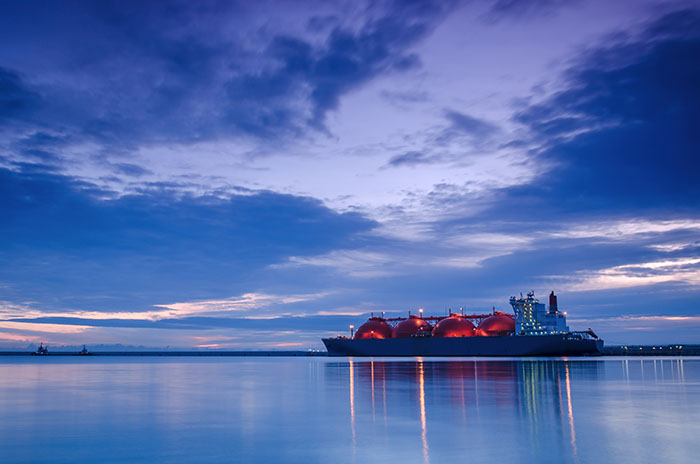 The development of low- to zero-carbon emitting fuels is the best route forward to meet the International Maritime Organization’s (IMO) global mandate requiring a sharp reduction in carbon dioxide (CO2) emissions, the American Bureau of Shipping (ABS) argues in a recent report.

In the classification society’s report, Setting the Course to Low Carbon Shipping: 2030 Outlook 2050 Vision, released at the Nor-Shipping event last week, ABS downplayed the potential of so-called “zero-carbon” ship designs, leaving low- or zero-emissions fuels as the next best solution to meet the IMO’s 2050 target. Under the mandate, the shipping industry, encompassing container, bulk, and other types of shipping sectors, is required to reduce CO2 levels 50 percent by 2050 as compared to 2008 levels while pursuing mid-term measures that will decrease CO2 emissions 40 percent by 2030. How the industry meets the mandates promises to have major ramifications on the shipping costs of containers to bulk cargo.

“[E]ven if we assume that the 2030 target can be met with available technology — slower speeds, improvements in operational efficiency, and a limited use of low-carbon fuels — the gap between 2030 emissions and 2050 targets will still remain large,” ABS said in its report.

The organization ruled zero-carbon ship designs out, at least in terms of reaching the 2030 goals, deeming current state-of-the-art technology insufficient to support their development in the short term. However, the society is hopeful that the increased proliferation of digital technology will help to simplify shipping practices, thereby “optimizing vessel speeds and routes, reducing waiting times, and streamlining contractual transactions.”

ABS cited just-in-time shipping as an example of how the industry can leverage information-driven technology to optimize energy use and reduce CO2 emissions. Just-in-time shipping, an inventory control strategy in which materials are delivered to manufacturers precisely when they are needed, could serve to slow ship speeds without imposing mandatory speed limits, a short-term solution to decarbonization that restricts vessels to a certain maximum speed.

Among the low and zero-carbon fuels ABS evaluated were liquefied natural gas (LNG), liquefied petroleum gas (LPG), methanol, ammonia, hydrogen, and biofuels, with no fuel option emerging as the clear leader. ABS concluded that each of the fuels have “some potential, but there is no obvious choice for the global fleet of the future.”

All alternative fuels were found to have shortcomings in terms of infrastructure and supply. Not one alternative fuel met energy density standards, which determine the amount of energy stored in a given substance, apart from biofuels. Although LNG and LPG offer large-scale availability, ABS claims they reduce insignificant amounts of CO2 output.

Hydrogen is the cleanest marine fuel currently available for industry use, producing almost zero greenhouse gas (GHG) emissions, according to the report. Despite its “green” properties, hydrogen fuel must be sourced accordingly to take full advantage of its benefits. A costly renewable power process is used to source hydrogen to avoid standard methane reformation, which could produce net carbon production worse than traditional fuels. Presently, carbon-free hydrogen production is energy intensive and not available at scale, ABS said.

Biofuels rival hydrogen as the next best fuel solution to reduce GHG emissions, largely because they absorb as much CO2 in their lifetime as they burn. Although ABS did not specify which specific biofuels are viable alternatives, according to an International Transport Forum (ITF) report, use of biodiesel as marine fuel could reduce GHG emissions by 70 to 80 percent compared to conventional fuels. But despite its positive impact on GHG emissions, the production of biofuels — which are derived from biomass such as oil crops or algae — may be geographically limited and cyclical, depending on environmental conditions.

While ammonia offers considerable reductions in GHG emissions and other pollutants, those gains are offset by the negative GHG contributions during its production life cycle. In addition, the compound is not economically feasible for use as maritime fuel, as it is too costly to produce in industrial-scale volumes, ABS said.

LNG is currently the cleanest-burning fossil fuel available at scale, but its potential CO2 reduction is capped at 21 percent, according to ABS, failing to meet IMO’s 2030 mandate.

LPG faces a similar hurdle regarding CO2 emission reduction. Despite extensive use across industries such as automotive and chemical production, LPG has scarcely been used as a fuel source in the commercial shipping industry, in part because it fails to significantly reduce CO2 emissions.

Looking forward, ABS does not discount that “improvements to the energy efficiency of ship designs will be required by the next phase of the IMO’s Energy Efficiency Design Index (EEDI),” but the group warns “their contribution to GHG reduction targets will be small without alternative, low-carbon fuels.”

Permalink Submitted by engineer_326@ya... on Jun 17, 2019 5:05PM EDT
Just-in-time requires some semblance of schedule reliability. So... carriers might want to work on that bit.

Permalink Submitted by erik@gladstein.org on Jun 17, 2019 9:56PM EDT
Renewable natural gas (RNG) can reduce well-to-wheel (or in this case, well-to-keel as SEA\LNG has termed) by 60 to 80 percent, and in some cases - depending on the source of the RNG - well over 100%. Check out Tab #5 on the CARB LCFS dashboard: https://www.arb.ca.gov/fuels/lcfs/dashboard/dashboard.htm. This is for on-road vehicles, but you can see how Bio CNG is the only fuel that gets below zero. Of course, critics will argue there is not enough RNG to fuel the shipping industry. Most likely that is correct. However, blending RNG into traditional natural gas (LNG) can also provide significant GHG emission reduction benefits. Allowing the LNG marine fuel market to access the CARB LCFS program would open up this significant potential opportunity, which will then - in turn - connect capital projects that require long-asset lives: methane capture/processing/RNG production and LNG marine projects. It's a nice potential match with a win-win-win opportunity.
Maritime News›Container Lines
Regulation & Policy›Transportation Regulations›International Transportation Regulations