No formal 2M membership for HMM as lines explore alternatives

No formal 2M membership for HMM as lines explore alternatives 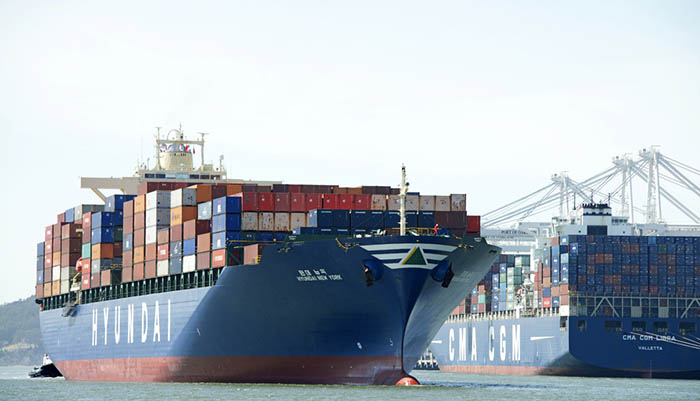 The shipping industry is anxiously awaiting details on the relationship between Hyundai Merchant Marine and the 2M Alliance.

Hyundai Merchant Marine will not join Maersk Line and Mediterranean Shipping Co. in the 2M Alliance but instead could cooperate with the European ocean carriers through a slot purchase agreement and slot exchange agreement, according to a Maersk statement to customers that was sent to JOC.com and confirmed by Maersk on Friday.

A possible slot purchase agreement is under discussion and could involve Maersk taking control of HMM charters and ships, according to the Maersk statement.

The statement was not sent to the media but rather to clients though Maersk later on Friday confirmed its authenticity.

HMM, following initial publication of this article, over the weekend disputed the idea that it is not joining the 2M and said its discussions with the Maersk/MSC alliance are ongoing.

HMM told JOC.com on Sunday: "HMM joining 2M is under discussion in details which will be concluded shortly. Formal agreement will be made either in the end of November or the beginning of December."

Joining the 2M is clearly important to HMM. The Korean carrier had signed a memorandum of understanding with 2M in July, a move some saw as a lifeline thrown to the struggling carrier that may have influenced its survival and the demise of fellow Korean carrier Hanjin at the end of August. But through it was reported by mainstream media at the time that HMM was in fact joining the 2M, the MOU was only just that and four months later had still not been finalized.

There was known to be tension within the 2M over admitting HMM as a full participant. At the JOC Europe conference in Hamburg in mid-September, MSC's senior vice president for Asia and Head of Vessel Sharing Agreements Caroline Becquart pointedly said no deal with HMM was finalized.

The addition of HMM to the 2M would have added only a 2 percent boost to 2M capacity on the trans-Pacific, maritime analyst Drewry has said. The additional capacity available to Maersk comes after a third quarter when the company’s container volumes grew 11 percent versus total market growth that the carrier estimated at only 1 percent to 3 percent, as trans-Pacific traffic increased 14 percent. Maersk partly attributed the growth to a flight to safety by shippers who turned to carriers perceived to be stable in the aftermath of the Aug. 31 Hanjin collapse.

In Maersk Group's third-quarter earnings call on Nov. 3 transcribed by Seeking Alpha, CEO Soren Skou said more capacity would need to be added given its volume growth and utilization, “It is our aim to grow market share organically and that will likely mean that we are going to have to add at least as much capacity, maybe a little more than the market is growing, going forward, considering that our network utilization is now really, really high. So it’s hard to squeeze a lot more onto the network without adding capacity in line with growth.”

The handing off of charters to Maersk would provide the South Korean line with yet more breathing room in a global container shipping market defined by structural overcapacity and lackluster demand.

The move would also free up capital for HMM’s plans to purchase mega-ship newbuilds with favorable loans from the South Korean government.

Although HMM posted a profit of 297 billion South Korean won ($253.1 million) in the third quarter, that profit was due to asset and investment sales from its restructuring. Those gains overshadowed an operating loss of of 230.3 billion won, a substantially worse performance than the loss of 77.7 billion won in the same quarter of 2015. Revenue at HMM in the third quarter was down 27 percent year-over-year to 1.5 trillion won.

HMM’s profit was from asset sales such as that of its Busan Newport Terminal, dedicated dry bulk division, and stakes in various ventures, such as Hyundai Securities. All told, these efforts raised about $1 billion.

The confirmation HMM will not join the 2M removes much of the uncertainty surrounding the relationship between HMM and 2M, which was marked by rumors of a possible Maersk acquisition of HMM. Maersk has said recently that one of the ways it will grow its liner business is through acquisition.

This is not true

This is not true