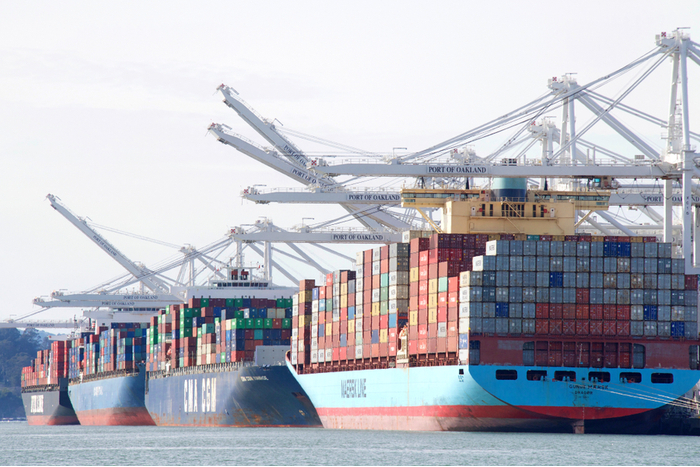 An orderbook that is just 10 percent of the global fleet has left carriers in a better position to handle the weak demand brought on by the coronavirus. Photo credit: Shutterstock.com.

Container shipping line executives say they’re confident the industry will be able to withstand a double-digit volume decrease this year brought on by demand-limiting measures introduced around the world to tackle the coronavirus disease 2019 (COVID-19).

The heads of CMA CGM, Hapag-Lloyd, and Maersk Line believe the small industry order book is suited to a low-growth environment, and their ability to quickly match capacity with demand and avoid price wars has left the industry in a better position to shrug off the volume declines of the second quarter and build on recovering demand through the rest of the year.

Rodolphe Saadé, CEO of CMA CGM, said in an interview with JOC Uncharted this week the industry has learned the harsh lessons of the 2008-09 global financial crisis, when carriers had huge amounts of capacity in service and on order, but limited volume to fill the ships. That overcapacity persisted through the industry downturn of 2011 and the unprecedented wave of carrier consolidation that culminated with the collapse of Hanjin Shipping in 2016.

“We learned the hard way,” Saadé told JOC Uncharted. “This year as an industry we have decided to take a different look at the situation and reduce capacity to match supply and demand. CMA CGM has seen a drop of 10 percent in our volume up to now, and we expect some catching up to happen in the third and fourth quarter. But there is no point in offering too much capacity when you have no cargo to carry.”

The current order book as of March 2020 was 2.3 million TEU, or about 10 percent of the container shipping fleet, which Rolf Habben Jansen, CEO of Hapag-Lloyd, said has left the industry better positioned to handle the weak demand.

“We have very few orders for new ships, and that will remain as no one wants a huge capex [capital expenditure] program right now,” Habben Jansen said during the carrier’s first quarter earnings call last week. “Most liner companies also have stronger balance sheets and much smaller investment plans than some years ago.”

Hapag-Lloyd is expecting a double-digit decline in volume in the second quarter, and Habben Jansen said the carrier would withdraw additional capacity if necessary.

Maersk Group CEO Søren Skou said the new ship construction discipline shown by the industry in recent years would now pay dividends. “The low industry orderbook is geared to a low-growth scenario, which was not the case in 2008-09 when the orderbook was massive and a lot of carriers had big blocks of capacity coming to them that they had to fill,” he said in the carrier’s first-quarter results announcement.

But Skou said there were other changes in the competitive dynamics of the industry that left it better prepared to handle severe volume disruption, most notably, an avoidance of “brutal price wars.” These have often been an industry response to falling demand and excess capacity, but instead of slashing rates, carriers over the past few months have blanked huge amounts of capacity on the major east-west trades.

By restricting capacity, carriers have managed to keep spot rates above last year’s levels despite declining demand. Rates on China-North Europe routes were 14 percent higher last week year over year at $831 per TEU, and China-Mediterranean rates were 25 percent higher at $875 per TEU, data from the Shanghai Containerized Freight Index (SCFI) show. The SCFI also shows China-US West Coast rates on May 15 were $1,686 per FEU, 25 percent above the levels during the same week last year. The only outlier was the China-US East Coast trade, where rates fell 2.1 percent to $2,542 per FEU, the lowest it has been all year, according to the JOC Shipping & Logistics Pricing Hub.

“We are not pursuing market share. We plan to grow slightly less than the market and will do what we can to preserve profitability, and I think a lot of other carriers are doing the same,” Skou said in the earnings call.

But he added that the consolidation of carriers into three alliances has also improved their ability to respond jointly to shifting market dynamics.

“One of the most important things to understand is that the three large alliances make it much simpler to adjust capacity in an agile way,” Skou said. “The alliances are structured to use the best ship for the best position. It is not us operating a string and MSC operating another string and then we swap capacity. We are operating one network, and each pay our own share, so taking a decision to adjust capacity is very simple and quickly done.”

The blank sailings have reached or just passed their apex, depending on the trade, according to data from Sea-Intelligence Maritime Consulting. By mid-May, the capacity withdrawn on the Asia-North Europe trade peaked at 25 percent, on Asia-Mediterranean 30 percent, and 15 to 20 percent on Asia-North America routes.

The canceled sailings, and to a lesser extent scrubber retrofitting, has led to a huge increase in the number of idle vessels, pulling a record 2.65 million TEU from global trades by mid-May, or 11.3 percent of the total container shipping fleet, Alphaliner noted. The analyst said in its latest newsletter that the idle ship capacity is likely to rise even further.

With carriers expecting a recovery to begin from the third quarter, some are starting to make the first slight adjustments to their mid-June networks on certain trades to match uneven demand patterns as countries and regions emerge from coronavirus lockdowns at different times.

Rahul Kapoor, head of research and analytics, Maritime and Trade, at IHS Markit, parent company of JOC.com, said carriers have shown that, in addition to curbing new ship orders, they won’t hesitate in slashing capacity by blanking sailings when demand plummets.

“This is a very strong indication [of] how carriers came together and took a very strong measure of capacity discipline and showed the resolve that they have,” Kapoor said earlier this year.

Parcel vs. LTL: Managing Big and Bulky Shipments Without Breaking the Bank
Global Shipping Outlook: What Will 2022 Hold?
Port Performance North America: When Will the Bottlenecks Ease?
END_OF_DOCUMENT_TOKEN_TO_BE_REPLACED