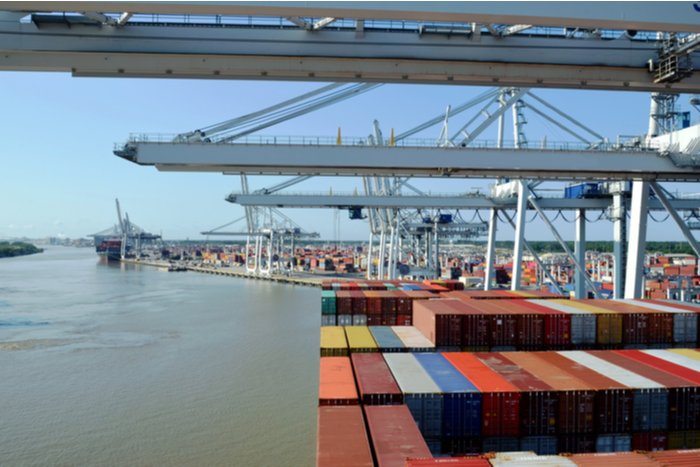 Volumes on the trans-Atlantic trade are weakening in both directions as COVID-19 heavily impacts the economies in Europe and North America. Photo credit: Shutterstock.com.

Carriers have announced another 9 blank sailings on the trans-Atlantic and will extend the capacity withdrawals deeper into the third quarter ahead of a worsening economic outlook for countries on both sides of the Atlantic.

The blank sailings bring to 23 the number of sailings canceled on the trans-Atlantic in the third quarter, withdrawing 10 to 25 percent of capacity depending on the individual week through week 33 (Aug. 10) on the North Europe and Mediterranean to North America East Coast (NAEC) trades, according to Sea-Intelligence Maritime Analysis.

Total volume on the Europe-North America routes was down 6.8 percent to 925,220 TEU compared with the same period in 2019, according to GTA Forecasting, a sister company of JOC.com and part of IHS Markit. It is the first time in five years that volume on the trans-Atlantic over this five-month period has registered a year-over-year decline, ending a period of stable growth in trade between the two mature economic regions.

GTA Forecasting expects US imports from Europe in 2020 to fall by 17.2 percent year over year to 2.65 million TEU and has forecast that Europe imports from the US will be 17.4 percent down at 1.68 million TEU.

“A sharp increase in blank sailings on the North Atlantic is an indication that there is no structural improvement in the US economy,” noted Alan Murphy, CEO of Sea-Intelligence, in his latest Sunday Spotlight newsletter.

The International Monetary Fund (IMF) this week revised downwards its World Economic Outlook, which was already predicting a steep decline in Europe and US growth levels when released in April. The IMF now expects Europe’s economy to contract by 10.2 percent in 2020 compared with the 7.5 percent decline forecast in April, and US growth to fall 8 percent, down from 6 percent.

It is a grim scenario for container shipping, an industry that counts on consumer demand to keep its ships full, and the impact of weakening volume is already being felt. COVID-19 lockdowns in Europe and the US that closed all non-essential retailers and factories for two months had the effect of slashing 70,000 TEU from the Europe-North America trade from January through May, according to the latest IHS Markit data.

Much of the decline in volume is being driven by the collapsing automotive industry sector in Europe, a key import-export market on the North Atlantic trade tied closely to the spares and machinery sectors. The European Automobile Manufacturers’ Association (ACEA) estimated June 23 that car sales in the EU would drop by 3 million units in 2020, the sharpest drop ever seen in the European automobile market.

Despite the lack of demand, freight rates have been lifted by the capacity cuts, with the spot rate on the westbound Europe-North America trade currently 10 percent higher than just after Chinese New Year at $2,443 per FEU, data from Drewry’s World Container Index (WCI) show. The rates are tracked weekly at the JOC Shipping & Logistics Pricing Hub.

However, while spot rates are rising, a global forwarder based in Germany said the longer-term rates were going the other way. The forwarder told JOC.com that he had recently concluded negotiations for a contract to move 20,000 TEU from Europe to the US and secured rates at “extremely low levels.”

The rate negotiated for North Europe to the US East Coast was $1,200 per FEU that included terminal handling charges and local charges on both sides, and the bunker adjustment factor (BAF). “With $300 for the Europe charges, $600 for the US local charges, and $300 BAF, you can see that the ocean rate for this contract is effectively zero,” he said.

While spot rates retain their strength, service levels on the trans-Atlantic have been falling all year, Sea-Intelligence noted, a surprising trend considering that schedule reliability on the trade lane has been improving since February.

The analyst’s latest Global Liner Performance update showed that the coronavirus-induced blank sailings so far this year have not had a negative impact on schedule reliability. Sea-Intelligence said this could be a case of a fewer number of vessels being easier to manage, in which case the analyst said a demand resurgence could see schedule reliability begin to fall.

“The average delays on the trans-Atlantic westbound trade have been on an increasing trend all throughout the year, with the May 2020 figure the second-highest for the month in the analysed period,” the liner performance update noted. “Despite schedule reliability improvement during the pandemic, the average delays for late vessel arrivals are at a considerably high level.”