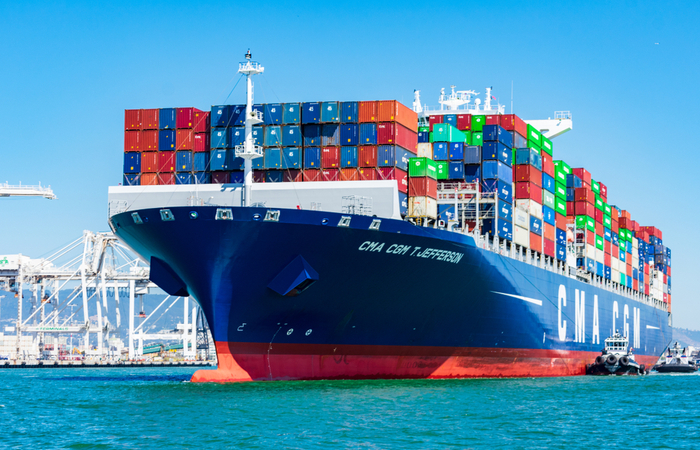 Moody’s Investors Service downgraded the corporate family rating of CMA CGM, as well as lowering its probability default rating, and changed its outlook for the carrier from stable to negative. A corporate family rating is defined as, “an opinion of an independent agency regarding the likelihood that a corporation will fully meet its financial obligations as they come due.”

"[Thursday’s] rating action reflects that CMA CGM's liquidity profile has weakened materially in the last 12 months as a consequence of the acquisition of CEVA Logistics, although expected by Moody's to improve somewhat in 2020,” Daniel Harlid, Moody’s assistant vice president and lead analyst for CMA CGM, said in a statement.

In its rationale for the downgrading, Moody’s said the rating followed the acquisition of CEVA Logistics, and that CMA CGM’s large capex program and a difficult market environment would continue to put pressure on the company's liquidity profile.

Moody’s conceded that CMA CGM has historically shown it has good access to capital and has some options to delay capital expenditures that would improve the current liquidity profile. The ratings agency also said the company was planning to sell a minority stake in CEVA and divest terminals, both actions that would improve liquidity.

However, the downgraded rating action reflected a substantial decrease in available liquidity since June 2018 when the company had $1.6 billion of cash on its balance sheet and $1.2 billion of undrawn revolving credit (RCF).

“This is in stark contrast with the liquidity position in June 2019, consisting of $1.5 billion — of which $270 million is at a CEVA level — and only around $280 million in undrawn RCF,” Moody’s said in a statement.

Alphaliner said in a report earlier this year that CMA CGM’s total debt reached $9.18 billion at the end of 2018 and would increase to over $15 billion this year due to new capital expenditure requirements, the consolidation of CEVA Logistics’ debt, and new IFRS 16 accounting rules.

Concerns over high industry debt levels were raised by Nilesh Tiwary, lead analyst for container shipping at Drewry, who told JOC.com recently that the overall debt for the world’s top 12 carriers exceeded $85 billion, with the combined debt-to-equity ratio of about 140 percent.

Carrier vertical integration strategies was one of the causes of the rising debt, with carriers such as Maersk and CMA CGM trying to leverage their size by delivering service across more parts of the supply chain. Maersk recently announced an ambitious target of having 50 percent of its profits generated by non-container shipping logistics services.

But the strategies came with a risk, and Tiwary pointed out that for the first quarter of 2019, CMA CGM reported an additional debt impact of $2.8 billion for its acquisition of CEVA Logistics.

A second reason for the high debt levels was the implementation of the IFRS 16 accounting standard from the beginning of 2019, which forces carriers to put long-term lease obligations on their balance sheets.

“The regulation requires carriers — or lessees — to recognize leases in the balance sheet as a right-of-use [ROU] asset and a lease liability,” Tiwary said. In the income statement, the lease cost is replaced by the depreciation of the leased asset and an interest expense for the financial liability.

“As a result, the new lease accounting standards have exposed large chunks of debts which carriers managed to hide earlier through off-balance-sheet borrowing,” he said.