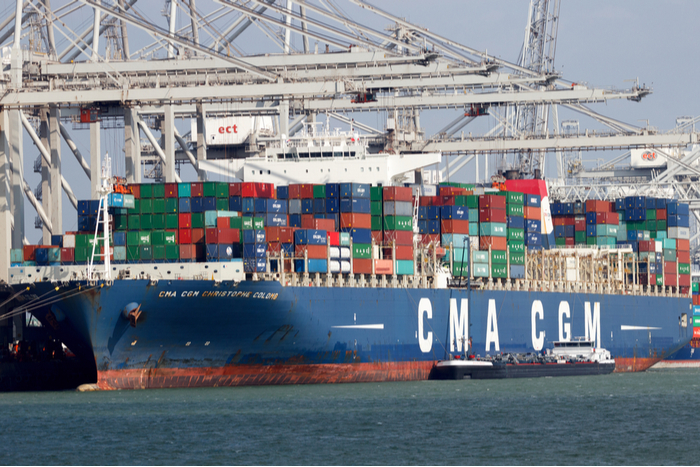 CMA CGM is expecting its global volume to decline by 10 percent in the first half as the impact on demand of the coronavirus disease 2019 (COVID-19) worsens through the second quarter. CMA CGM reported a group net profit of $48 million for the first quarter, an apparent turnaround from a $43 million loss in the same period last year, but that net result includes a one-off gain of $187.3 million from the disposal of port stakes in Terminalink to joint venture partner China Merchants in March.

The Marseille-based carrier saw volumes drop 4.6 percent in Q1 and says demand has remained depressed in the first two months of Q2 as COVID-19 lockdown measures continued to weigh on global consumption.

Other major carriers have shared a similarly gloomy outlook in recently released first-quarter financial results, with the only variance being in the level of expected demand. Hapag-Lloyd, for instance, is expecting a “low double-digit” decline in volume for the second quarter, while Maersk is expecting volume to drop by up to 25 percent.

But even with the expected drop in volume, Rodolphe Saadé, chairman and CEO of the CMA CGM group, had an optimistic outlook. “Despite the uncertainty around the global economy, we anticipate an improvement during the second quarter, thanks to our operational flexibility and our discipline in terms of cost control,” he said in a statement.

Group revenue, meanwhile, declined 3 percent to $7.19 billion in the first quarter, although the carrier managed to improve its operating profit significantly, reporting earnings before interest, taxes, depreciation, and amortization (EBITDA) of $973 million, up 25 percent year over year.

In the shipping and logistics division, CMA CGM reported first-quarter volume declining by 4.6 percent, and despite booking “slightly improved” revenue per TEU, revenue from the division declined 3.3 percent to $5.52 billion. However, EBITDA adjusted for gains was up strongly in the first three months, rising 31 percent year over year to $836 million.

CEVA Logistics, the third-party provider purchased by CMA CGM in 2019, increased its revenue 0.6 percent year over year to $1.71 billion in the first quarter, although the segment’s EBITDA fell by 5 percent to $137 million. CMA CGM had planned for CEVA to reach profitability by the end of 2020, but that target was last year extended to 2023-24. The impact of the pandemic on CEVA in the first quarter was partly offset by an increase in demand for air charters, CMA CGM said.

CMA CGM said its liquidity position had been strengthened “in these unprecedented economic and health conditions” by the syndicated loan of $1.1 billion that was signed with a consortium of three banks in May. The French government will guarantee 70 percent of the loan, which has an initial one-year maturity and an extension option for up to five additional years.

The loan will free up cash for CMA CGM, which emerged from 2019 with debt levels of $17.8 billion that the carrier is urgently working to pare down following a $229 million loss for that year. The carrier in March extended credit lines for the $535 million remaining from its 2016 acquisition of Neptune Orient Lines, former owner of CMA CGM subsidiary line APL, for another three years, giving it a little breathing room.

In a recent analysis of carrier financial results, analyst Sea-Intelligence Maritime Consulting noted that Hapag-Lloyd was the only carrier to report global volume growth in the first quarter, increasing its liftings 4.2 percent year over year to 3.05 million TEU, and bringing the Hamburg-based carrier within 1 million TEU of Cosco Shipping for the first time since the first quarter of 2015.