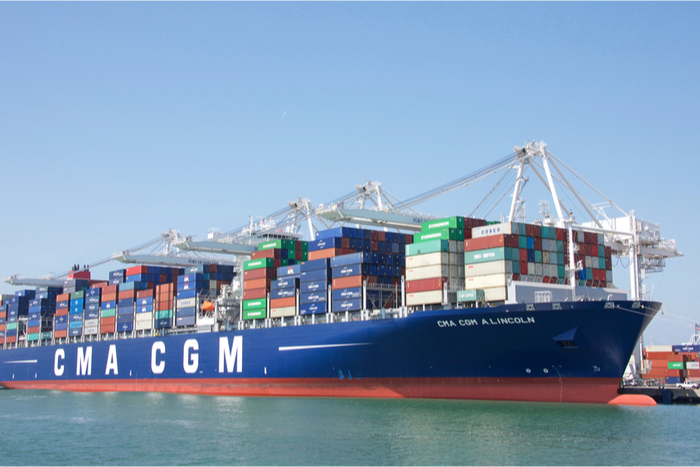 CMA CGM aims to raise $2 billion from asset sales and refinancing over the next few months to help cut its enormous net debt levels that by the end of the third quarter had soared to $18.36 billion, the carrier disclosed in its third quarter earnings result.

Almost $7 billion of debt stems from the IFRS 16 accounting rules that require carriers to put long-term lease obligations on their balance sheets, while the 2018 acquisition of CEVA Logistics contributed $1.2 billion of the net debt.

To pare down debt levels, the group plans to raise more than $2 billion in cash by mid-2020. Of that, $860 million will come from vessel sales and leaseback transactions that will be primarily used to pay down the loan contracted to acquire CEVA Logistics.

Another $968 million will be raised from the sale of stakes held by CMA CGM in 10 port terminals to Terminal Link, a joint venture 49 percent owned by China Merchants Port that currently holds stakes in 13 port terminals. The carrier said Terminal Link would finance these acquisitions through a capital increase of $468 million and loans, and the transaction, subject to antitrust and other regulatory approvals, was expected to close in spring 2020.

Despite its heavy debt burden, CMA CGM’s operational performance showed an improvement in the third quarter compared with the same period last year. Volume grew 5.1 percent year over year, mainly as a result of the acquisition of Finland-based short-sea carrier Containerships. Operating costs per TEU fell by $89 and revenue grew 25.8 percent to $7.6 billion.

Moody’s Investors Service in September downgraded the corporate family rating of CMA CGM, lowered its probability default rating, and changed its outlook for the carrier from stable to negative. In its rationale for the downgrading, Moody’s said the rating followed the acquisition of CEVA Logistics, and that CMA CGM’s large capex program and a difficult market environment would continue to put pressure on the company's liquidity profile.

Even as the carrier improves its profitability, CEVA Logistics remains an area of concern for CMA CGM. CEVA’s expected return to profitability, expected by the end of this year, has now been pushed back to 2023-24.

While CMA CGM said CEVA Logistics’ integration was proceeding according to the strategic plan, the carrier noted in its earnings statement, “CEVA Logistics’ exposure to the automotive and technologies industries is continuing to dampen demand in both the freight and the contract logistics services segments. In addition, the significant investments made to transform CEVA Logistics are also weighing on margins in the short term.

“The group confirms the profitability targets previously announced for CEVA Logistics, but sets their effects to 2023/2024 due to the challenging environment in certain industrial sectors. The group remains firmly committed to returning CEVA Logistics to a sustainable and structural profitability, thanks to the wide variety of measures and investments undertaken since the acquisition closed.”

In its analysis of carrier third-quarter earnings, which exclude CMA CGM, Sea-Intelligence Maritime Consulting noted that unlike in the 2018 third quarter, where all carriers reported a year-over-year increase in revenue, only six of 10 carriers (or seven including CMA CGM) reported revenue growth in 2019’s third quarter. Maersk, Hapag-Lloyd, Yang Ming, and HMM all reported a year-over-year decrease in revenues.

The analyst wrote in its Sunday Spotlight newsletter that only Yang Ming and HMM recorded a negative 2019 third quarter EBIT. Maersk increased its EBIT by a massive $677 million year over year, while ONE improved its net result by $313 million. Sea-Intelligence noted that even HMM, which has been facing sustained profitability issues, reported a $74 million increase in its EBIT compared with the third quarter of last year.

CMA CGM said in the earnings statement that it “was confident” that its 2019 performance would show an improvement over the full-year 2018 result.