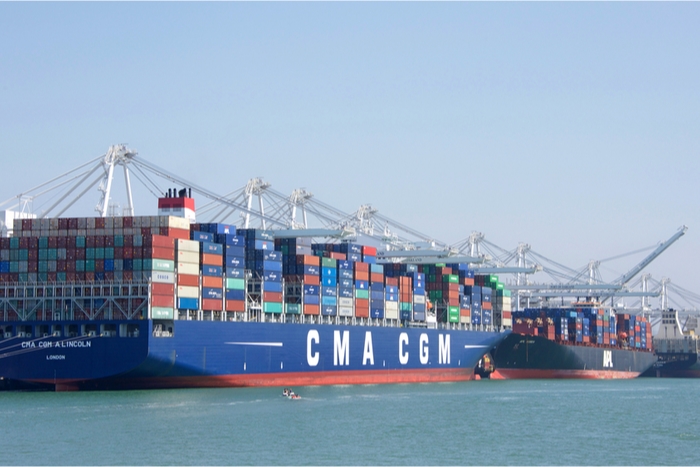 CMA CGM is expecting its first half container volume to fall by 10 percent. Photo credit: Shutterstock.com.

CMA CGM will receive a $1.14 billion state-guaranteed loan that will improve the debt-burdened carrier’s cash position as it struggles with falling demand brought on by the coronavirus disease 2019 (COVID-19).

The loan will free up cash for CMA CGM, which emerged from 2019 with debt levels of $17.8 billion that the carrier is urgently working to pare down following a $229 million loss for the year. The carrier in March extended its $535 million credit lines with Neptune Orient Line for another three years, giving it a little breathing room.

“I would like to thank the French authorities for having introduced this scheme so effectively and quickly,” Rodolphe Saadé, chairman and CEO of the CMA CGM Group, said in a statement Wednesday. “This loan also shows the confidence our banking partners have in the CMA CGM Group's business model and strategy.”

The 1.05 billion euro syndicated loan was secured by CMA CGM from a consortium of three banks — BNP Paribas, HSBC, and Société Générale — and is part of France's state-guaranteed loan scheme established at the end of March in response to the coronavirus. The French government will guarantee 70 percent of the loan, which has an initial one-year maturity and an extension option for up to five additional years.

CMA CGM is expecting its volume to decrease 10 percent in the first half of 2020 year over year, a slightly more optimistic forecast than Maersk CEO Søren Skou's prediction this week that his carrier’s second quarter volume will be down by up to 25 percent after a first quarter drop in volume of 3.2 percent.

To match the falling demand, the Ocean Alliance of CMA CGM, Cosco Shipping, OOCL, and Evergreen will blank a total of 28 sailings on Asia-North Europe comprising 437,031 TEU, and 16 sailings on Asia-Med, withdrawing 152,460 TEU, according to data from Sea-Intelligence Maritime Consulting. On Asia-US trades, the Ocean Alliance has so far canceled 60 sailings that have cut 578,115 TEU.

Another debt-strapped carrier that has received a financial hand from the state is HMM. In April, the South Korean government said it would make $382 million (KRW 470 billion) available to HMM as part of a $1 billion emergency package for the Korean maritime sector. A spokesperson for HMM told JOC.com the maturity extension of its current loans was “expected to account for a substantial percentage” of the government handout. The loan will provide urgently needed liquidity for the loss-making carrier that reported operating losses of $261 million in 2019.

Rolf Habben Jansen, CEO of Hapag-Lloyd, a partner of HMM within THE Alliance, said he had some sympathy for the South Korean government in making the bailout after the Hanjin bankruptcy in 2016.

“I don’t think it will massively disrupt the industry, but generally we should not have too many of these state bailouts and hopefully we will not see too much more,” he told reporters during a press briefing earlier this month.