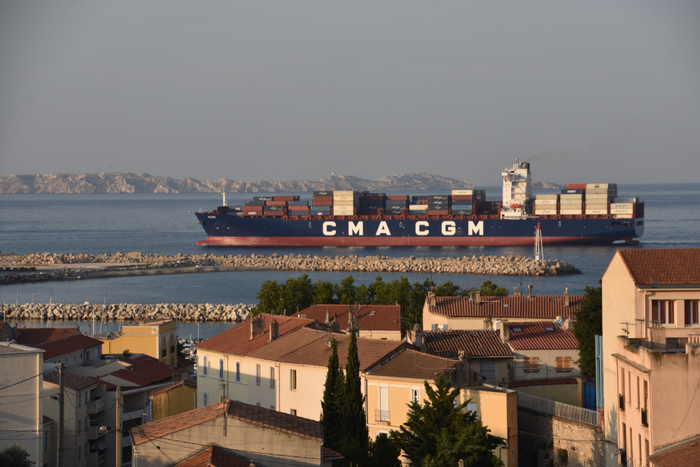 CMA CGM is one of 11 international groups that have joined forces in the drive to create a more sustainable transport and logistics industry. Photo credit: CMA CGM.

Eleven global companies representing the shipping, retail, technology, banking, and energy sectors this week formed a coalition to accelerate the search for a sustainable fuel source capable of powering the transport and logistics industry.

Rodolphe Saadé, chairman and CEO of the CMA CGM Group, said the carrier was “fully mobilized” to find concrete short, medium and long-term solutions. “In view of the challenges facing the world, we must unite our strengths in order to accelerate the energy transition of the transport and logistics industry,” he said in a statement.

Within the new industry coalition, the 11 members will pool their research and development efforts in pursuit of three key goals aimed at achieving tangible results by 2030. The coalition wants to unlock a more extensive portfolio of clean energy sources, lower energy consumption per kilometer-equivalent of goods transported, and eliminate a substantial proportion of emissions linked to transport and logistics.

Shipping’s involvement in the search for a cleaner fuel is driven by the fact that as an industry, it is responsible for about 2.5 percent of the world’s total greenhouse gas (GHG) emissions, and there is growing pressure for the maritime industry to transition to more sustainable power sources. It is widely accepted that meeting the International Maritime Organization (IMO) target of cutting annual emissions by at least 50 percent by 2050 from 2008 levels will only be possible if shipping can develop a viable non-carbon-based fuel — and engines capable of running on that fuel.

Research into several new fuel types is under way across ocean carriers, shippers, and research groups. CMA CGM in December 2019 entered into a deal with Shell to secure tens of thousands of tons of used cooking oil to be used in biofuel pilot tests. In October 2019, Maersk Line and Wallenius Wilhelmsen teamed up with Copenhagen University and some of their largest customers — BMW Group, H&M Group, Levi Strauss & Co., and Marks & Spencer — to explore whether LEO, a blend of lignin and ethanol, could serve as a viable zero-carbon bunker. Mediterranean Shipping Co. has also conducted pilot biofuel sailings.

But there are signs that shipping companies have less of an appetite to invest in areas that are not directly related to their immediate survival following the devastating impact of the coronavirus disease 2019 (COVID-19) on consumer demand.

A European Community Shipowners’ Association (ECSA) survey conducted in April found that just 26 percent of its members believed they would be able to go ahead with planned investments in cutting carbon dioxide (CO2) emissions. The poll found 44 percent of respondents would no longer be able to make such investments, while 30 percent would reduce the level of their investment.

“This is a major setback for the industry, which is fully aligned with the IMO's 2050 CO2 reduction targets, and has since the new European Commission took office been supportive of the European Union's ambition to be the world's first carbon-neutral continent,” the ECSA said in a statement.

Joel Gentil, CMA CGM Group senior vice president of corporate social responsibility, environment, and institutional relations, said the transition to new energy sources would come with costs and require “massive” investment, but there was no time for delays.

“The carbon targets set by the IMO, and soon by the European Union, will be legally binding,” he told JOC.com. “Our customers’ expectations for low carbon transport and logistics are significantly growing. The biggest brands are really supportive and cooperate with us within different initiatives.”