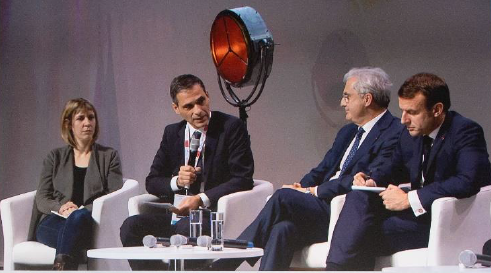 CMA CGM has burnished its credentials as a leading advocate of green shipping by extracting a pledge of support from French President Emmanuel Macron for the launch of an international coalition to accelerate the search for a cleaner fuel.

On stage at the French Maritime Economy Conference in Montpellier Tuesday, the carrier’s chairman and CEO Rodolphe Saadé used the occasion to invite Macron to initiate the coalition with the priority on developing a more competitive and less carbon-intensive energy source.

The French president accepted the invitation and pledged to support the initiative, whose first forum could be held on the occasion of the World Conservation Congress in Marseille in June 2020.

After securing the high-level political support, Saadé announced a 10-year deal with French oil major Total for the supply of 297,000 tons of liquefied natural gas (LNG) bunker fuel annually at its Marseille-Fos hub in the Mediterranean.

“Liquefied natural gas is the only energy currently available and reliable to significantly reduce our carbon footprint,” Saadé said in a statement. “The choice of LNG to power our ships requires the complete adaptation of the entire energy supply chain and infrastructure.”

“By choosing Marseille-Fos as a refueling port for our 15,000 TEU vessels from the end of 2021, we are bringing the French container ports into this major energy transition,” he added.

CMA CGM is heavily committed to LNG-powered vessels with nine 23,000 TEU dual-fuel LNG-capable ships coming online before the end of 2020; the first, the CMA CGM Jacques Saadé, named after the group’s founder, was launched in China in September.

Another five LNG-fueled ships of 15,000 TEU will be delivered in 2021. The Total deal will secure the carrier’s LNG bunker supply on the Asia-Europe trade for those vessels. Total will also provide LNG bunkering in Singapore.

The aim is to expand Marseille-Fos as an LNG bunkering hub for shipping, reinforcing its attractiveness by offering LNG bunkering solutions for the supply of ultra-large container vessels, and following the examples of major Northern European ports.

Rotterdam is one of the leading LNG bunkering ports in Europe. Earlier this year, Ronald Backers, business intelligence advisor at the port, told JOC.com there were about 10 vessels regularly calling at Rotterdam using LNG.

“Most are tankers, but when the first CMA CGM vessels begin to call in 2020, the LNG bunker volume will really start to increase, because each vessel will take on around 3,000 tons,” he said.

Saying no to the north

CMA CGM’s environmentally friendly approach to shipping was also on display when Saadé announced in August that none of his carrier’s 500 vessels would use the Arctic passage, turning his back on the route despite knowing it would represent a “major competitive advantage for shipping companies.”

While Macron’s support for the global coalition proposed by Saadé was appreciated, another high-level pledge made Tuesday might receive a more lukewarm reaction from container shipping. New European Commissioner Ursula Von der Leyen said at the COP25 climate change meeting in Madrid that the EC next March will propose a European Climate Law to make the transition to climate neutrality irreversible.

The law will include extending emission trading to “all relevant sectors,” including transport. It is not clear whether this means a previous decision will stand that excludes container shipping from the European emissions trading scheme (ETS) until 2023 if there is no comparable system operating in the International Maritime Organization (IMO) by 2021.

Container shipping is strongly opposed to being included in the ETS, which it believes takes a regional approach to what needs to be a global carbon market.