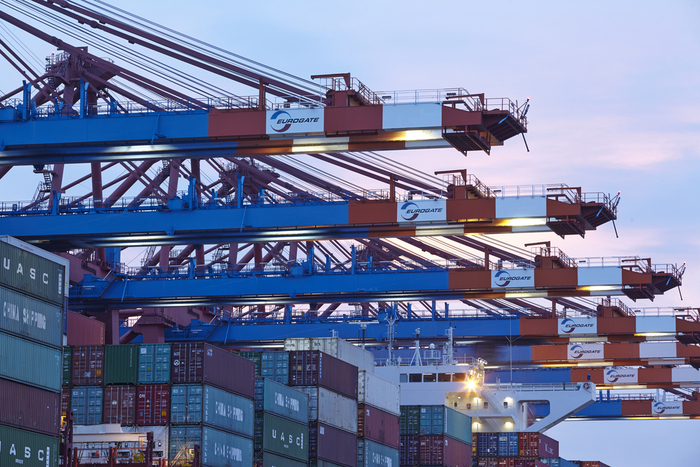 Congestion at Hamburg port has seen 2M carriers moving their AE7/Condor-service to Bremerhaven until the end of July. Photo credit: Shutterstock.com.

Hapag-Lloyd is the latest carrier to make such a move, citing Monday “the ongoing congestion situation” in Rotterdam as the reason it was terminating an eastbound call at the Dutch hub on its Far East Loop 4 for seven consecutive weeks from this week.

That follows last week’s announcement by the 2M Alliance of Maersk and Mediterranean Shipping Co. that it was extending a shift in calls by its AE7/Condor service from a congested Hamburg to Bremerhaven until the end of July, which affects eight consecutive sailings.

While carriers give congested ports as a reason for their network adjustments, terminals say it is the poor on-time performance by container ships that is creating the port handling difficulties.

“The port’s main players are making great efforts to eliminate the resultant bottlenecks and delays as rapidly as possible,” a Port of Hamburg marketing spokesman told JOC.com. “These can only succeed in small steps, however, owing to continuing high cargo volumes caused by sometimes massively, persistently late arrivals.”

He gave a bleak assessment of the current situation in Hamburg, where late ship arrivals were causing export containers to accumulate in their thousands at terminals in Germany's busiest port.

“With persistent delays in ship arrivals, over which the Port of Hamburg has only minimal influence, this new situation could become further aggravated,” he warned. “At the same time, an unprecedented number of import containers are being handled on a single ship’s call in the port. Terminals have meanwhile hit their capacity limits.”

A spokeswoman for HHLA terminal in Hamburg told JOC.com Monday, “There is still a high workload on the terminals due to the ongoing ship delays. It is not possible to reliably predict when this is expected to clear.”

Helge Neumann-Lezius, head of FCL for Europe, Middle East, and Africa at DHL Global Forwarding, said vessels on nearly all services were not calling during agreed and reserved operation windows at the North Europe terminals.

“This leads to the situation where terminal operations have for weeks been running on first-come, first-served basis,” he told JOC.com. “As soon as schedule reliability is back to a more normal level, delays will disappear.”

Neumann-Lezius said too many vessels were arriving at the same time — out of their windows and asking for berths, making it difficult to plan hinterland capacity, which was moving from scheduled services towards ad hoc services.

European barge operator Contargo noted in its latest advisory that waiting times for barges in Rotterdam was currently at 89 hours, and at 37 hours in the nearby Belgian hub of Antwerp.

“Schedule reliability can hardly get worse, and the terminals in Europe are full so it is difficult for carriers to get berthing windows,” he said. “If a vessel can’t make its berthing window, it may have to offload more cargo at a different port that may not be able to efficiently handle the volume.”

The latest schedule reliability data for the Asia-North Europe trade is for April, when vessels’ on-time performance — arriving within one day of the published arrival — was just 24.4 percent, according to Sea-Intelligence Maritime Analysis. That was down from 72 percent during April 2020.

“Demand remains very strong at the moment, and I don’t think we are going to get out of this very soon,” Hapag-Lloyd CEO Rolf Habben Jansen told reporters during a press briefing last week. “Congestion will remain an issue for the coming months. Waiting times for ships that is normally 1-1.5 days (global average) is now well over three days.”

Sri Laxmana, vice president of global ocean product at C.H. Robinson, explained in a blog posting that as ocean carriers introduced more blank sailings or skipped ports to recover schedules thrown out by port delays, the freight that was skipped would have to be added to the backlog of containers.

“It’s likely we won’t see a large shift in congestion until the demand levels out,” he said, adding that the global logistics system was already brittle and grappling with a range of challenges, including equipment shortages and poor schedule reliability.

However, the chances of demand on the Asia-Europe trade slowing down soon are slim, according to Michael Amri, global head of sea freight and FCL for Hellmann Worldwide Logistics

“We are only entering the peak season now so no one should expect spot rates to ease in the coming weeks and months ahead,” Amri told JOC.com Monday. “A few months ago, we did not expect rates to surpass the $10,000 per TEU mark. Now we are getting close to $20,000 on the spot market.

“Obviously, these rate levels are not sustainable, but as long as the demand stays strong, anything can happen,” he added. “No one should expect any short-term relief on rates and major improvements to on-time service.”

Spot rates on the China-North Europe trade this week reached $5,497 per TEU, according to Xeneta, 607 percent above the rate during the same week in pre-pandemic 2019.

Canada Trade and Shipping Outlook
TPM22: What We Learned — Container Shipping in the Crosshairs
Managing E-Commerce From Order to Delivery and Beyond
END_OF_DOCUMENT_TOKEN_TO_BE_REPLACED