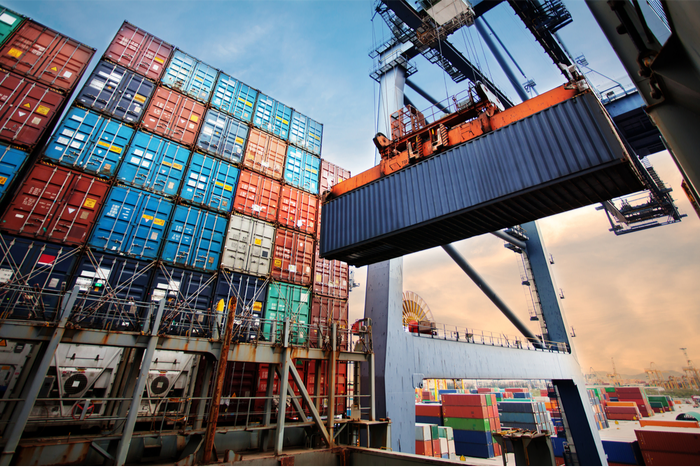 The economic signs coming out of Europe are not encouraging for a container shipping industry wanting to balance capacity with demand. Photo credit: Shutterstock.com.

Surplus capacity in the Asia-Europe trade and expectations of slowing demand has led to deep capacity cuts by some container carriers in their July services.

Alphaliner noted that the July blanking of four sailings by THE Alliance of Hapag-Lloyd, Ocean Network Express (ONE), and Yang Ming alone will remove 67,700 TEU from service that month. The canceled sailings will hit the market just ahead of the peak season, evidence that carriers are not confident demand will be able to overcome surplus capacity on the trade.

Volume data on Asia-Europe is not yet available for May, but the economic signs coming out of Europe are not encouraging for a container shipping industry wanting to balance capacity with demand.

The IHS Markit Eurozone manufacturing Purchasing Managers’ Index (PMI) has been contracting since February and in April hit a six-year low. Export momentum and its spillover effects have been pivotal to the Eurozone economy’s ups and downs over recent years, but IHS Markit modeling suggests export growth will flatten, even given decent global growth.

Sand has forecast weak demand growth for the next few quarters and expects the container shipping industry to return to negative margins this year.

According to maritime analyst SeaIntelligence, excess capacity on the Asia-Europe trade reached 1.03 million TEU in the first quarter, despite solid year-over-year demand growth of 6 percent during that period.

But crucially for the carriers, spot rates were largely stable through the first quarter, fluctuating within a narrow range of about $60 per TEU, although tracking downwards from January through April. The Shanghai Shipping Exchange’s Shanghai Containerized Freight Index (SCFI) rate for last week was $716 per TEU on Asia-Europe, 14 percent below the rate at the same time last year. The weekly SCFI rate movements are tracked at the JOC Shipping & Logistics Pricing Hub.

According to rate marketplace Freightos, China-Europe spot rates are currently at $1,289 per FEU and while the prices have remained stable in the first half of the year, they are still down 16 percent from the same 2018 period and down 37 percent from 2017. A series of freight all kinds (FAK) rate increases on Asia-Europe are planned for July 1.

“Bearing the brunt of the 18,000-plus-TEU mega-vessel rollout, supply continues to outstrip demand, at least until APL withdraws [from Asia-Europe] after peak season,” Freightos said in its weekly update. “Despite this, carriers are trying to increase prices to cash in on the bottleneck preceding Europe’s pre-August shutdown.”

CMA CGM will pull APL off the Asia-Europe trade after the summer to allow the carrier to focus on its core trans-Pacific and intra-Asia trades.

The rest of the year remains uncertain. Moody’s said although the China Containerized Freight Index (CCFI) rose in the first months of this year following a challenging 2018, the index, which tracks spot and contractual freight rates from Chinese ports on 12 shipping routes, declined seasonally after the Chinese New Year. Given that fuel prices are rising, increases in freight rates will be needed to compensate for these rising expenses.