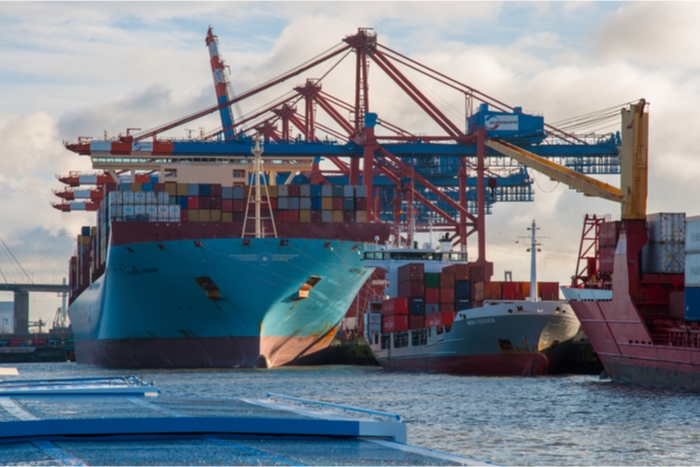 By cutting so many sailings, carriers have been able to sustain spot market rates at levels 25–40 percent above those of last year on the east-west trades. Photo credit: Shutterstock.com

Rapidly withdrawing capacity on east-west trades to prevent a rate collapse has been a highly successful strategy for carriers navigating the demand-crushing coronavirus disease 2019 (COVID-19) that shut down the major markets of Europe and North America.

By cutting so many sailings, the carriers have so far been able to sustain spot market rates at levels 25–40 percent above those of last year, according to Sea-Intelligence Consulting, despite rapidly weakening demand as countries closed most retail outlets and manufacturing.

Rates on China–North Europe were 14 percent higher last week compared with the same week last year at $831 per TEU, and China-Mediterranean rates were 25 percent higher at $875 per TEU, data from the Shanghai Containerised Freight Index (SCFI) show.

The SCFI shows China–US West Coast rates on May 15 were $1,686 per FEU, 25 percent above the levels during the same week last year, and the only outlier was the China–US East Coast trade where rates fell by 2.1 percent to $2,542 per FEU, the lowest it has been all year, according to the JOC Shipping & Logistics Pricing Hub.

The blank sailings have reached or just passed their apex, depending on the trade, with Sea-Intelligence reporting that this week the capacity withdrawn on Asia–North Europe stands at 25 percent, on Asia-Med it is currently 30 percent, 15–20 percent on Asia–North America routes, and an incredible 50 percent of capacity has been withdrawn from the Asia–South America trade this week (week 21).

“As global demand continues to be significantly affected, we expect volumes in Q2 to decrease across all businesses, and it is our aim to pair the drop in demand one-to-one with reduced capacity in our network,” said Maersk Group CEO Soren Skou. “Rates have stayed above levels seen a year ago and the industry has been very agile in managing capacity.”

Carriers hold off with Q3 cuts

“They all clearly expect demand to be depressed through to the end of Q2, and then the level of blank sailings drops to near-zero,” the analyst said. “While of course nothing can be ruled out, it appears exceedingly unlikely that demand will revert back to normal from Jul. 1. We would therefore expect the level of blank sailings will once more start to increase, as carriers become forced to take a stance on their capacity management for Q3.”

Hapag-Lloyd CEO Rolf Habben Jansen said in a May 15 first quarter earnings call with analysts that the second quarter would see the weakest volume, followed by a slow recovery that would continue through the second half. However, he said if volume declined by 10 percent for the year as forecast by analysts, the carrier will have to take out more costs, which would mean withdrawing additional capacity.

“In reality, net capacity across 2020 will be negative in the end,” he said. “We have a fair amount of charter ships in our fleet and we do intend to return a double-digit number of ships that will lower our capacity. We try to adjust our cost base to the demand we see, but we will be able to scale up rapidly when the recovery occurs.”

Philip Damas, head of supply chain advisors at Drewry Shipping Consultants, said its data shows a reduction in canceled sailings in the first two weeks of June where 13–14 percent of sailings have been blanked compared with 18 percent of sailings in April and May. However, he said there has been a 250 percent increase in the idle fleet capacity since May 2019 as carriers took out sailings, entire loops, or retrofitted scrubbers.

“It has created a huge pool of unused capacity,” he said in the recent Drewry webinar. “It also has the effect of putting downward pressure on charter rates, and when demand returns it will take a long time to use up this idle capacity.”

Simon Heaney, senior manager of container research at Drewry Shipping Consultants, said during the webinar that the industry was in for a bumpy ride through the rest of 2020.

“The anemic growth rates of 2019 have never looked more appealing as they will make way for the double digit slumps of the second and third quarter,” he said. “The strength of the recovery will depend on the economic rescue measures that governments put forward and the extent that business and consumer confidence can be supported. That will come under more strain the longer the coronavirus sticks around.”