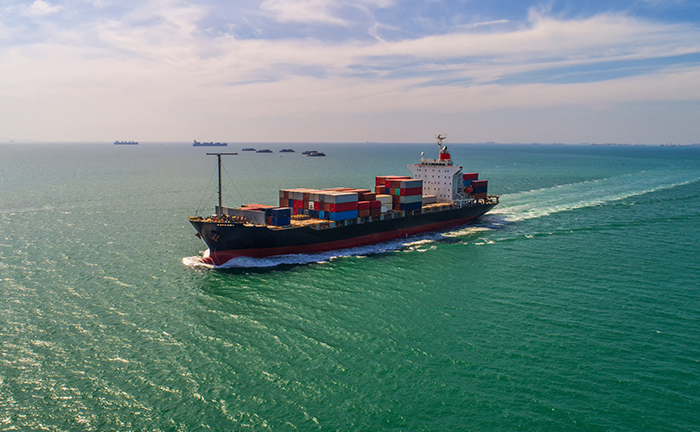 Container lines' Asia-Europe capacity cuts have so far made an impact.

Shanghai-Europe spot rates continued to hold their ground in the first week of the Chinese New Year, while rates from China to the Mediterranean actually rose slightly, according to the latest reading of the Shanghai Shipping Exchange’s Shanghai Containerized Freight Index.

The Shanghai-North Europe spot rate fell $18 this week to $1,023 per 20-foot-equivalent unit, but it was the sixth consecutive week it has been above $1,000 per TEU. On the Shanghai-Mediterranean route, the spot rate rose $2 to $988 per TEU.

Comparisons to the same week last year on on JOC.com’s Market Data Hub reveal the impact of container lines’ disciplined approach to managing capacity in the slack post-Chinese New Year period. The rate to Europe this week is $451 per TEU higher than during the same week in 2016, and the Mediterranean rate is $490 per TEU higher.

Ocean carriers have made deep capacity cuts deep capacity cuts as China’s factories remain closed for the holidays, with SeaIntel Maritime Analysis CEO and partner Alan Murphy describing the blanked sailings as being at their highest level in four years. 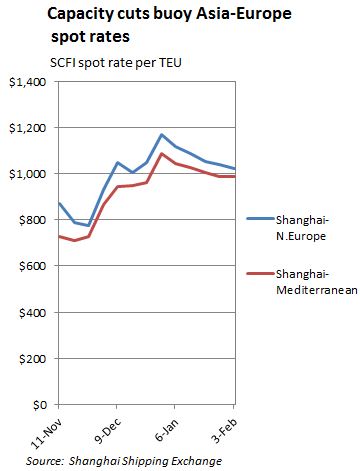 “Based on patterns of spot rate developments in past years, we are expecting spot rates on Asia-Europe and trans-Pacific to drop 15 percent to 20 percent in the coming weeks, but second-quarter spot rates we estimate to be up 90 percent to 150 percent year-over-year on Asia-Europe,” he said.

Asked about the heavy capacity cuts expected in the next couple of weeks, a spokesperson for Orient Overseas Container Line said: “It is important that carriers constantly keep a close eye on the changes in the market and the performance of their products to ensure they are meeting customers' requirements.”

OOCL’s operational update for 2016 revealed that Asia-Europe volumes in the fourth quarter grew 28 percent to 264,410 TEUs, with the Hong Kong-based carrier enjoying a Hanjin Shipping bounce as shippers on a "flight to safety" shifted their business to better managed container lines.

However, keeping the rates up over the next few weeks is crucial for container lines if they are to preserve their solid start to the year. The strong volume and higher spot market in the three months from October to December 2016 gave the lines a hefty revenue injection, helping them narrow losses or even post profits for the quarter.

The three main Japanese carriers have reported their results for the October to December period (their financial year’s third quarter), and the container shipping division of MOL was the only one to make a profit. This was largely the result of the higher volume-higher rates environment that existed at the end of the year.

The Japanese carriers are expecting little from the first quarter of 2017. In their results presentations, NYK said it expects its results to decline (the NYK Group loss for the first nine months was $2 billion), while “K” Line said the seasonal decline in the cargo shipping combined with rising bunker prices would continue to create adverse market conditions. All three carriers are anticipating record annual losses.

MOL said it did not expect Asia-Europe spot rates to collapse to the same levels as last year that decimated carrier profitability in the first half. Following a Dec. 31 high in 2015, the SCFI-tracked rates headed straight for the bottom, stopping only in mid-March at $205 per TEU. The Shanghai-Mediterranean rate fell to $195 per TEU in the same period.

Interestingly, NYK Line reported 97 percent utilization of its ships on Asia-Europe in the October to December period and is expecting the load factors to remain at 97 percent in its final quarter from January through March. The carrier has forecasted an average ship utilization of 95 percent for its full financial year from April 2016 through March 2017.