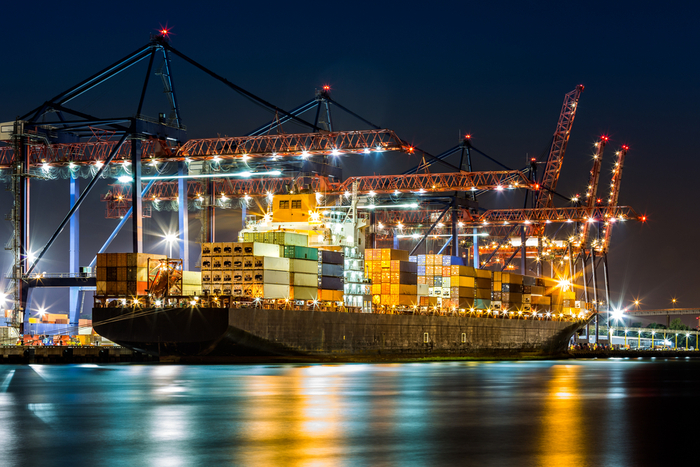 Volume on the trans-Atlantic has been dragged down this year by the struggling automotive industry, which is a major contributor to demand on the trade. Photo credit: Shutterstock.com.

Europe’s high-volume automotive and machinery exports to North America have been hit hard by the coronavirus disease 2019 (COVID-19), raising questions about the long-term growth prospects of the trade.

Lockdowns on both sides of the Atlantic slashed 70,000 TEU from the Europe to North America trade route from January through May, to 925,220 TEU, down 6.8 percent year on year, according to the latest IHS Markit data. It is the first time in five years that volume on the trans-Atlantic over this five-month period has registered a year-over-year decline, ending a period of stable growth in trade between the two mature economic regions.

But as the coronavirus disrupts the market, a closer look at the IHS Markit data reveals that demand for automotive and spare parts crashed 40 percent, or more than 31,000 TEU, compared with the first five months of 2019. US machinery imports fell 20,000 TEU, or 14.3 percent, over the period. IHS Markit is the parent company of JOC.com.

“We have seen a significant reduction in volumes, in particular to the automotive and spare segment, due to the plant shutdowns,” Arne Maibohm and Holger Oetjen, Atlantic trade executives for Hapag-Lloyd, said in a joint statement. Although the trans-Atlantic was a stable trade compared to the trans-Pacific and Asia-Europe, “under the current environment following the worldwide COVID-19 impact, the Atlantic trade also requires substantial blank sailings in order to adjust capacity to the reduced demand,” they said.

To balance supply with the drop in volume, carriers blanked 48 sailings from April through week 32 ending Aug. 9 on routes from Northern Europe and the Mediterranean to North America, according to Sea-Intelligence Maritime Consulting. In its latest Sunday Spotlight newsletter, the analyst said the level of blank sailings announced by the carriers was equivalent to the withdrawal of about 12 to 14 percent of the capacity deployed on the trade.

An executive from another major Europe-based carrier, who did not wish to be identified, told JOC.com that automotive parts typically comprise 10 to 12 percent of its volume on the trans-Atlantic, but volumes fell sharply in the first five months of the year.

“We adjusted our capacity to cut costs, and with demand reduced by around 20 percent, we have pulled 20 percent of our capacity out the trans-Atlantic on routes to the US from both North Europe and the Mediterranean,” he said.

Automobile production is largely concentrated in Northern Europe, and mainly in Germany, but the coronavirus led to all non-essential businesses being closed, which included vehicle manufacturing plants and the spare parts industry that supports both local and export demand. Those factories began to resume production in mid-May, albeit at a lower level because of weak demand and social distancing requirements limiting worker numbers.

The wider auto sector provides direct and indirect jobs for 13.8 million people in the European Union, with vehicle makers operating 229 vehicle assembly and production plants across the region, according to the European Automobile Manufacturers’ Association (ACEA). The association said in a recent statement that the economic and social impact of the COVID-19 crisis on the automotive sector was particularly severe.

“Currently, there is little visibility on what the future holds,” the association said. “If this situation persists, the sector risks a meltdown with large-scale bankruptcies and restructuring. During the financial crisis from 2008-13, the automotive sector lost 440,000 jobs in car production and the aftermarket. If no measures are taken, this number risks being dwarfed by the current recession, which may be much deeper.”

A global forwarder based in Germany said his volume on the trans-Atlantic declined 65 percent from February through May as carriers lost major accounts from car manufacturers. He said volume would likely be so weak that some of the blanked sailings would not be reinstated before the end of the year.

But as carriers moved quickly to manage their capacity on the trans-Atlantic, the blank sailing programs have had the same effect as the extensive capacity withdrawals on the trans-Pacific and Asia-Europe trades. Even with a significant drop in demand, rates from Rotterdam to New York are currently 1 percent higher than during the same week last year at $2,398 per FEU, according to Drewry’s World Container Index (WCI).

The pricing stability in the face of volatile volume is perfectly illustrated by headhaul rate levels where the average rate over the past 12 months is $2,386. Since January, the rates, tracked weekly at the JOC Shipping & Logistics Pricing Hub, have fluctuated within a narrow band of $2,188, a 2020 low reached on Feb. 6, and $2,592, a high reached on May 7 and May 14.

Patrik Berglund, CEO of Xeneta, an ocean and air freight rate benchmarking and market analytics platform, said there has been no significant changes in the short-term market since Jan. 1.

“The average price for an FEU from North Europe to US East Coast ports has dropped 3 percent since January, and [as of June 16] is at $1,920,” he told JOC.com. “The contract market has seen no change for the same time period.”