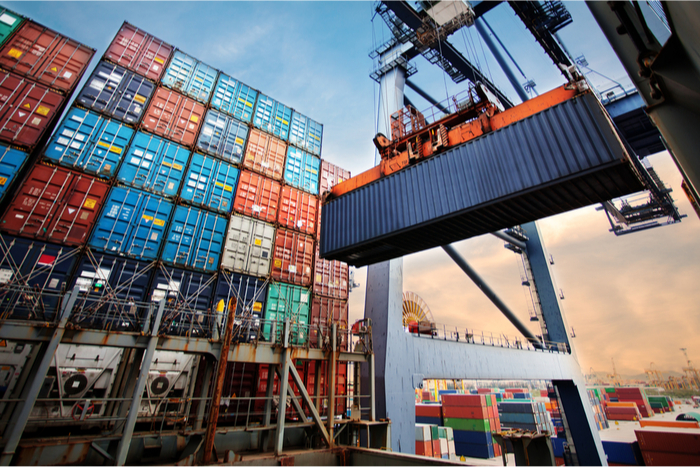 Carriers are struggling to raise spot rates on Asia-North Europe, despite sailing cuts being made on the trade. Photo credit: Shutterstock.com.

Carriers preparing for a sharp increase in costs as they switch to low-sulfur fuel over the next two months appear to be falling back into their old predatory pricing habits as spot rates tumble despite capacity withdrawals and rising vessel utilization levels.

Volume grew almost 6 percent year over year from January through August, data from Container Trades Statistics (CTS) shows, while the utilization of ships increased steadily during that time from the mid-60s to 88 percent, according to maritime consultancy Drewry. But rate levels could not keep up.

“There was clearly an element of rate-cutting going on and if that hasn’t been eradicated, lines are unlikely to realize the full benefit of the planned capacity reductions,” Drewry noted in its latest Container Insight Weekly.

West-bound slot capacity in September was down 1.4 percent on the same month last year, the first year-over-year decline in 2019, Drewry said. The analyst said carriers appeared to be bracing for weaker demand ahead with numerous blanked sailings programmed for October and November.

In addition to the blanked capacity, HMM has removed its AEX loop in preparation for its full entry into THE Alliance next April, and, for the second consecutive year, the 2M partners have suspended their AE2/Swan service from the end of September to mid-November. Drewry added that the service was pulled one week ahead of schedule due to poor demand in the run-up to China’s Golden Week holiday at the start of October.

Since August, Asia-North Europe spot rates have weakened even further, plunging last week to their lowest point in over a year. The Shanghai Containerized Shipping Index (SCFI) shows rates on Oct. 11 reaching $581 per TEU. Tracked weekly by the JOC Shipping & Logistics Pricing Hub, that price is more than 20 percent below the same period last year.

Only three carriers have announced freight all kinds (FAK) rate increases on Asia-North Europe so far in the fourth quarter. From Oct. 15 on Shanghai to Rotterdam services only, Cosco Shipping has announced a rate rise to $800 per TEU, and Maersk Line will try to lift rates to $825 per TEU. The spot rate has not been at $825 per TEU since Feb. 22.

From Nov. 1, Maersk Line will set its FAK level at $1,100 per TEU, and CMA CGM will charge $1,000. If either of those rates is achieved, it will be the highest in well over a year and could be an indication of an expected surge in demand ahead of the early Chinese New Year.

Carriers have been showing capacity discipline in terms of blanked sailings; capacity will decline 2.2 percent in the fourth quarter compared with the capacity deployed on Asia-Europe in the third quarter, Sea-Intelligence Maritime Consulting noted in a recent Sunday Spotlight newsletter.

With the sailing cuts, any increase in demand will place upward pressure on rates.  But Parash Jain, global head of shipping and ports equity research at HSBC, said he was expecting the second half to end up softer than the first six months.

Most of that cost pressure is going to come in the next two months as carriers switch over to low-sulfur fuel ahead of the IMO 2020 mandate that goes into effect Jan. 1.

Jain said the fuel-related cost of shipping a TEU from Shanghai to Rotterdam could nearly double as carriers switch to low-sulfur fuel. He pointed out the current fuel component of shipping a TEU to Rotterdam was about $100 based on ships using traditional high-sulfur bunker fuel and a spot charter rate of $600 per TEU. Fuel costs would climb to $187 per TEU for carriers using low-sulfur fuel.

Rahul Kapoor, vice president and head of research and analytics, Maritime and Trade at IHS Markit, agreed. “Freight rates will be higher over the course of the next few years,” Kapoor said.