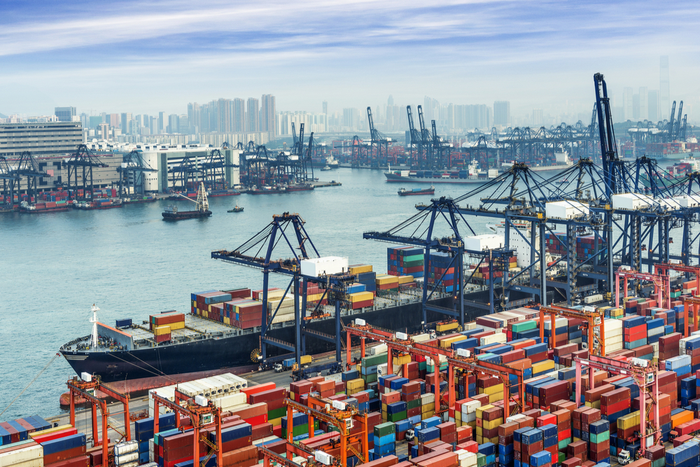 Spot rates on the Asia-Europe trade are tracking well above last year’s levels as carriers continue to keep capacity in line with rising demand from a reopening Europe.

The China–North Europe rate rose 2 percent this week and is now 32 percent up year over year at $907 per TEU, according to the Shanghai Containerized Freight Index (SCFI). The China-Mediterranean spot rate, which had a marginal increase this week, is up 38 percent compared with the first week of July last year at $970 per TEU.

The weekly rate movements, tracked at the JOC Shipping & Logistics Pricing Hub, show rates on both North Europe and Med routes climbing steadily through much of the demand-erasing lockdowns imposed to limit the spread of the COVID-19. Spot rates are currently almost 20 percent higher than when Europe began to shut down in late March.

However, as retailers and manufacturers across Europe gets back to business, carriers and forwarders are reporting increasing volume beginning to pass through their networks, and a tightening of capacity.

“The volumes are rebounding and the expectation is for a strong utilization of our ship systems throughout July and August,” a spokesman for Hapag-Lloyd told JOC.com Thursday.

“On Asia westbound, the rebound is driven mostly by North European retailers and furniture stores reopening as well as increased NVO [non-vessel owning common carriers] and BCO [beneficial cargo owners] demand. The booking trends are strong from China, and Indochina/Southeast Asia are also rebounding from lockdowns.”

Fears that the rising volume with limited capacity would lead to an increase in cargo being rolled in Asia from one sailing to another have been played down by carriers and forwarders. Rolling of cargo is a consequence of overbooking of vessels by carriers to combat no-shows of cargo booked by shippers, but it is a practice with little visibility and highly disruptive to shipper supply chains.

“As we control the volume uptake in line with available capacities, we have a smaller roll pool but nothing exceptional,”the Hapag-Lloyd spokesman said. Another major carrier told JOC.com this week that its advance bookings did not suggest “right now” that any cargo would need to be rolled in Asia in July.

Dominique von Orelli, head of ocean freight for DHL Global Forwarding, said his forecasts did not suggest an increase in cargo rolling was likely and that although the situation was “tense,” it remained under control.

Franziska Reckling, global sea logistics marketing manager for Kuehne + Nagel, told JOC.com capacity was tightening on many trades, including Asia–Europe, but the forwarder has not had any issues securing space or with cargo being rolled.

Despite the extensive capacity cuts pushing up spot rates on the three major east-west trades, there is no escaping the fact that demand will be severely curtailed as recession-hit economies struggle to recover. IHS Markit, parent company of JOC.com, is predicting a 10.1 percent year-over-year drop in global container volume in 2020. In a June 15 episode of JOC Uncharted, Neil Glynn, European transport equity research at Credit Suisse, said global volume in the second half of the year would be down 10 percent compared with the same period of 2019, while Nilesh Tiwary, manager at Drewry Maritime Financial Research, is expecting overall volume for 2020 to fall 8 percent year over year.

With such a significant drop in demand, Peter Sand, chief shipping analyst for association BIMCO, said even with the spot rate strength on the major east-west trades, container shipping was in stormy waters.

“With demand set to fall this year, while the fleet continues to grow, 2020 will prove a painful year for carriers, even if freight rates are held up by record high container ship idling,” Sand said.