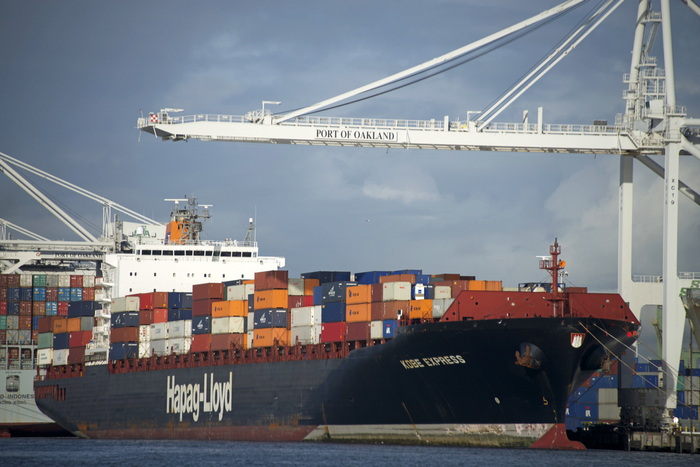 Hapag-Lloyd is reporting volume levels in the third quarter similar to those of last year. Photo credit: Shutterstock.com.

Spot container freight rates continue to rise on the Asia-North Europe trade, and service providers say their forward bookings indicate the strong demand and price levels will be maintained through the fourth quarter.

This is not good news for shippers that will soon enter their annual contract tendering period on the trade in a strong sellers’ market and can expect a substantial increase in long-term rates, according to Patrik Berglund, CEO of online rate benchmarking platform Xeneta.

“We are getting into a heavy tender period in Q4 and Q1 when a lot of contracts will be signed on Asia-Europe, and if these market levels hold up, the big-volume long-term players should anticipate substantial rate increases on both front- and back-haul routes,” Berglund told JOC.com. “There is still time for the shippers to stall and wait and see what happens with the short-term market. The shippers have a strong incentive to drag their feet and wait, because based on historical data, it can hardly get worse.”

Average short-term rate levels from major ports in China to those in North Europe on Xeneta’s rate platform reached $1,117 per TEU as of Sept. 10, up 15 percent from early August and 30 percent from the same week last year.

According to the Shanghai Containerized Freight Index (SCFI), China-North Europe spot rates increased slightly over last week to $1,054 per TEU, but are up 14.5 percent compared with the first week of August and up 56 percent year over year. The weekly rate movements of the SCFI can be found at the JOC Shipping & Logistics Pricing Hub.

The higher rates are being accompanied by rising volume, but the carriers are still flexing capacity to match the demand impacted by the coronavirus disease 2019 (COVID-19).

Alan Murphy, CEO and founder of Sea-Intelligence Maritime Analysis, told a JOC Container Shipping Outlook webinar Thursday that carriers had blanked 75 sailings on Asia-North Europe and 73 on Asia-Mediterranean trades from April 18 through Sept. 4.

Transport volume on the Asia-Europe trade for July, the latest month for which after-the-fact figures are available, ticked up 2 percent year over year to 1.5 million TEU, according to data from Container Trades Statistics (CTS), but the trend is one of rising demand.

Andreas Bütfering, senior director of trade management, Far East, at Hapag-Lloyd, told the JOC webinar that the carrier’s third-quarter volume levels have been similar to those of last year and he expects that to continue through the end of 2020.

“We are around the 2019 level on the demand side,” he said. “Forecasts currently suggest a slight dip in demand after Golden Week in October, but it will be much less than in previous years, and we even hear that some factories in China will not reduce production to catch up on Q2. We expect a small dip in October and then continuing strong demand.”

“We also expect a dip after Golden Week, but then we have Christmas and Chinese New Year after that, so I think the volume will continue to be strong,” he told the JOC webinar. “Asia-Europe is peaking but it is still manageable, although capacity will remain very tight.”

Carriers filling in the blanks

To accommodate an expected drop in demand in October after Golden Week, carriers have scheduled 20 blank sailings on Asia-North Europe routes, Murphy said.

But the analyst was not convinced the current demand is sustainable, and while the volumes were strengthening, it was not a very strong peak and was being driven by commodities such as furniture, toys, and plastics. “But we are also seeing a disconnect between macroeconomics and container shipping, and people are shifting consumption from services to goods,” he added.

“The question is when the lockdowns are released completely, will we see a shift back to services and a fall in demand [for goods]? What we are seeing now may be just a dead-cat bounce.”

With volume recovering, carriers are trying to match the improving demand by reinstating some of the capacity that was withdrawn from the market during the second quarter to keep rates up and mitigate the impact of falling demand — and revenue.

But the blank sailings strategy that was so successful for the carriers, improving their second-quarter profitability across the board, has drawn strong reaction from beneficial cargo owners (BCOs).

“These blank sailings are killing us,” Mats Samuelsson, senior vice president of global logistics at retailer H&M, told the JOC webinar. “They are costing a heck of a lot of money and making our supply chains really tough. It’s terrible.

“We plan how the stores should look months ahead. It is very important that we get what the carriers promise and we get the capacity we need,” he added. “Volume is picking up now, we have reduced all our air space, so we really need that capacity.”

In response, Bütfering noted that accurate forecasts by customers were crucial, especially in times of falling demand.

“Coming out of the [COVID-19] crisis, forecast quality is crucial for us to adjust capacity, and it will remain so to make available the capacity that is needed in order to enable global trade,” he said. “In April and May, the market dropped 20 to 30 percent, and no BCO could tell us how much their production would be reduced. Commitments we had in place were not fulfilled because of the lockdown here in Europe.”

Bütfering said the steep decline in demand during the second quarter posed a major risk to Hapag-Lloyd that had to be addressed. “To operate what is a heavy asset-driven business, it was clear that we needed to take the costs out and adjust the capacity to the demand, which was very difficult to predict,” he said.

Global Shipping Outlook: A Sneak Peek at 2021
Port Performance North America: Managing Cargo Flow During a Pandemic — and Beyond
END_OF_DOCUMENT_TOKEN_TO_BE_REPLACED