APL to focus exclusively on trans-Pacific

APL to focus exclusively on trans-Pacific 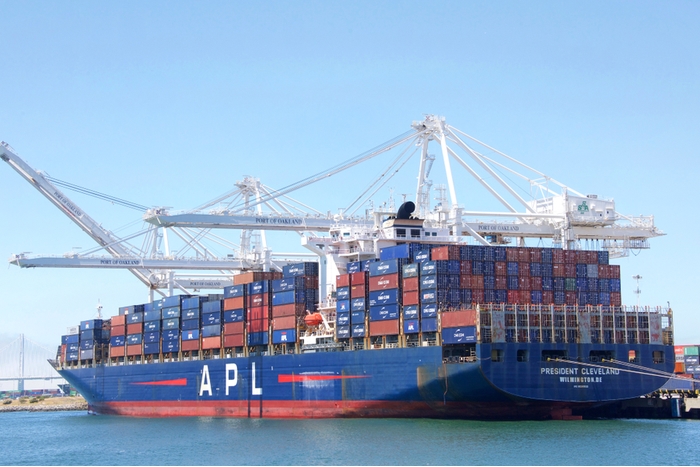 APL has transferred all its business on the India, Middle East, and Latin America trades to parent CMA CGM and will cover only Asia-US. Photo credit: Shutterstock.com.

CMA CGM from July will deploy its APL brand exclusively on the trans-Pacific trade, where the carrier holds the second-largest market share behind Cosco Shipping and its subsidiary line OOCL.

APL will be pulled out of routes covering India, the Middle East, and Latin America over the next three months, retaining the group’s US government business and remaining as the only carrier brand in the CMA CGM Group with US-flagged vessels, according to Alphaliner.

A spokesperson for CMA CGM said Thursday the group was continuing to reorganize the trade network of CMA CGM and APL. The service allocations on the Asia-Red Sea, Asia-India Subcontinent, Asia-Middle East, Arab Gulf, and Asia-Latin America trades will be transferred to CMA CGM.

“With these changes, the group will be able to deliver a more efficient line management structure and ensure an undivided focus on delivering excellence and creating new value for our customers,” the CMA CGM spokesperson said.

APL and CMA CGM last year carried a total of 3.59 million TEU in the trans-Pacific, good for a 15.8 percent market share behind Cosco Shipping/OOCL, which held 17 percent (3.85 million TEU), according to data from PIERS, a sister product of JOC.com within IHS Markit.

When Stéphane Courquin was appointed CEO of APL in mid-2019, he was given the priority of consolidating long-haul trans-Pacific routes as the carrier withdrew from the Asia-Europe trade.

But his appointment came in the middle of the United States-China trade war that roughed up the trans-Pacific market in 2019. CMA CGM/APL reported a 2.6 percent decline in volume to 2.54 million TEU last year as total US import volume from China dropped 9.8 percent to 10.5 million TEU. Evergreen Line was the only carrier in the top five for US imports from Asia to grow its volume in 2019, increasing the number of TEU 5.4 percent.

While Asia-US volume suffered in 2019, in the westbound trade, CMA CGM/APL continued to dominate US exports to Asia with a 17.4 percent market share, thanks in part to a 9.5 percent year-over-year increase in volume. Ocean Network Express (ONE) is second with a 16.4 percent share. Overall, the top five carriers and common-owned companies share of westbound trans-Pacific container volume in 2019 was mostly flat at 68.3 percent for the full year.

CMA CGM has steadily pulled APL out of other trades since acquiring the carrier four years ago. Its intra-Asia business was taken over by regional specialist CNC Line in December 2018, while Asia-Europe and trans-Atlantic trades transferred to CMA CGM in October 2019. Alphaliner said the carrier’s existing service allocations will be transferred to CMA CGM from May 15 on Asia-India Subcontinent and Asia-Red Sea trades, from June 15 on Asia-Middle East/Gulf trades, and from July 1 on Asia-Latin America.