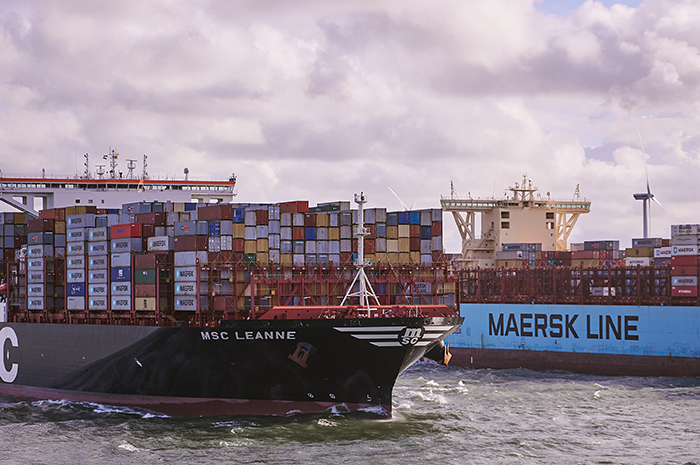 Maersk Line and Mediterranean Shipping Co. were the top two carriers on the US import trade in 2017. Photo credit: Shutterstock.com.

Maersk Line has followed its 2M Alliance partner Mediterranean Shipping Company in introducing an emergency bunker surcharge from June 1 on all corridors as rising fuel prices ramp up unit costs and erode profitability. The Danish carrier will impose a $60 per TEU and $120 per FEU bunker surcharge on all cargo globally, effective June 1 on non-Federal Maritime Commission (FMC) corridors, and from July 1 on FMC corridors.

“The increase in bunker price in 2018 has been significantly higher than what had been expected and has now reached a level of $440 per ton in Europe, the highest since 2014. The increase is more than 20 percent compared to the beginning of 2018 and this unexpected development means that it is no longer possible for us to recover bunker costs through the standard bunker adjustment factors [BAF]," Maersk Line announced in a customer advisory.

MSC said fuel prices were up more than 30 percent this year, and almost 70 percent since last June, with prices in Europe passing $442 per ton last week. The carrier said crude oil was hovering around $80 a barrel — the highest since 2014 — and “emergency action” was required.

“MSC is therefore introducing a worldwide temporary emergency bunker surcharge on all ocean and land-based cargo carriage with immediate effect. This last-resort measure is essential to ensure that we navigate these challenging economic conditions in a steady and sustainable way and continue to provide a high quality of service to all our customers,” the carrier said.

After recording a profitable 2017, the first profitable year in years, carriers have crashed to first-quarter losses. While MSC does not release quarterly financial results, Maersk Line earlier this month reported an underlying loss of $220 million in continuing operations in the first quarter that it blamed largely on the rising cost of fuel. It was a pain felt by many other carriers that reported first-quarter losses. Hapag-Lloyd lost $40.5 million in the first three months of the year; Yang Ming Line lost $67 million, Hyundai Merchant Marine reported a loss of $164 million, and ZIM Integrated Shipping posted a $21.6 million loss.

There was a common theme in the results, with container volume increasing — by 16 percent in ZIM’s case — as well as revenue. Maersk Line even reported a 7 percent increase in average freight rates. However, fuel price increases spoiled the party in the first quarter and carriers will be hoping the emergency bunker surcharge goes some way towards addressing the unit cost issues.

Bunker prices have been rising steadily since July last year, but since the beginning of April the price of ISO 380 bunker fuel has jumped another 21.4 percent to an average of $452.58 per metric ton across the ports of Shanghai, Rotterdam, and New York-New Jersey as of May 17, according to IHS Markit data.

However, the emergency surcharges earned carriers a stinging rebuke from Lars Jensen, CEO and partner at SeaIntelligence Consulting, who said the BAF-style surcharges have become undermined over the years, rendering them ineffective because of the spill-over effect between BAF and base freight rates.

“This was easy to live with when we were in a low-cost fuel environment, but the increases have made it untenable,” he said. “Hence the carriers have a good case for why rates need to increase to adjust for fuel. The problem is that the way they are attempting to do it now is neither a logical nor a long-term durable solution. The changes in surcharges must be directly linked to the fuel impact on the individual containers — and a fixed fee irrespective of trade and vessel size does not live up to this.”

Jensen said the emergency bunker surcharge was being imposed on all corridors, irrespective of the length of the journey and the typical vessel sizes used on the different trade lanes. “By the very nature of this it means that the fuel surcharge mechanism has no clear link at all with the actual fuel price impact on the individual container shipped,” he said. “Hence the old surcharges, which actually did strive to have a clear link between fuel consumption per TEU on a specific trade lane, are now being supplanted by a mechanism with no such link at all.

“We are in a situation where the carriers have acknowledged that the current bunker surcharge mechanism is broken. But instead of replacing it with a new mechanism, they put the new mechanism on top of the old broken mechanism.”

The bunker surcharges will be implemented at the same time as several carriers try to raise rates on the Asia-Europe trades. Spot rates rose above $800 per TEU on Asia-Europe this week and edged closer towards the year-over-year levels, but market rates will need to rise significantly in June to compensate for rising bunker prices.

The latest reading of the Shanghai Shipping Exchange's Shanghai Containerized Freight Index shows that the rate from Shanghai to Rotterdam rose by $32 to $825 per TEU this week, while on the Asia-Mediterranean it was up $53 to $848 per TEU. Weekly rate movements are tracked at the JOC Shipping & Logistics Pricing Hub, and the data show that it is the first time in three months the Asia-Mediterranean rate has been higher than that of Asia-North Europe.

The high rate levels carriers are planning to charge customers from June 1 show an urgency to get freight rates up to levels that can mitigate the sharply rising price of bunker fuel as well as capitalize on the higher volume being seen by many carriers.

SeaIntel noted that if a more modest capacity growth of 5 percent was targeted, it could be achieved through the blanking of just four average-sized sailings over the 9-week June-July period, that SeaIntel CEO Alan Murphy said was well within the capability of carriers and would not create much disruption.

“The Asia-Europe trade is seeing a vast amount of newbuildings being delivered in 2018, but the carriers have managed to balance Asia-Europe supply to a reasonable degree. The carriers should be able to blank sailings to match a weak demand environment on Asia-Europe over the peak season, while also having enough capacity buffer if demand growth is stronger than expected,” he said.

Ocean carriers are starting to reexamine the way freight rates are viewed. Hapag-Lloyd CEO Rolf Habben Jansen questioned the freight rate market price, and said while there were customers that shipped purely based on price, container shipping was not fully commoditized like the oil business.

“If you want to buy a barrel of Brent oil today then you will pay around $70 a barrel because there is a market price,” he said at the Global Liner Shipping conference in Hamburg. “But a ship that sails between Shanghai and Rotterdam, you will still find a price variance among the rates of 15 to 20 percent. We are not in a fully commoditized market.

Maersk Group said in its first-quarter results announcement that the carrier will become less dependent on freight rates as it drives up its non-ocean business with the goal of becoming a integrated provider of global container logistics.