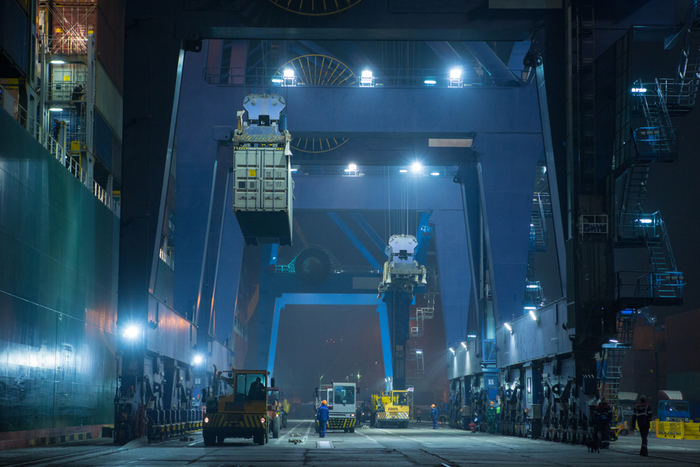 Base spot rates on the trades out of Asia are reaching new highs every week, with huge surcharges piled on top. Photo credit: Shutterstock.com.

There is a growing variance within the soaring spot rates being paid by shippers on the trans-Pacific and Asia–North Europe, with cargo owners scrambling for vessel space as container shortages and port congestion at both ends of the trade cut available capacity.

Ships are backing up in Asia and at major US and European import gateways, delaying the turnaround of vessels and empties and driving up the spot rate. However, the range between high and low spot rates is huge and accompanied by carriers levying hefty surcharges to guarantee space and equipment, said Peter Sand, chief shipping analyst at BIMCO.

“We talk about the spot market as one market, but there is a base rate and then there are tons of surcharges on top,” Sand told a BIMCO webinar this week. “Everyone in the market is interested in one thing: getting cargo moving in the fastest possible time so there are no empty shelves or inventories being run down. There is quite a range of what is being paid by the highest 10 percent and the lowest 10 percent, and it all depends on the relationship between the shipper and carrier, and if you are desperate.”

Base spot rates on the trades out of Asia are reaching new highs every week, but within those rate levels there is a significant spread between what shippers pay at the upper and lower ends of the scale even before the surcharges to guarantee loading are applied.

“In the past, if you look at the volatility of the last decade, a typical Asia to Europe 40-foot container has usually been around $2,000, with peaks of maybe $3,000 and ultra-lows of $500,” Michael Braun, vice president of customer solutions at rate benchmarking platform Xeneta, told JOC.com’s recent European Shipping Review and Outlook webinar.

“We sometimes see the $25,000 rate on offer, although that doesn’t mean this is the average paid rate. But there has never been an upward trend like what we are seeing today.”

Surcharges vary between individual carriers but can be as much as the base rate. Xeneta has advised that carriers are charging premiums of up to $10,500 per container to guarantee loading on trans-Pacific routes and up to $4,000 per TEU on Asia-Europe.

These charges are on top of the Asia–US West Coast short-term rate of 32 days or less that is currently at an average of $8,327 per FEU, a level that is six times the average pre-pandemic 2019 rate at this point, according to Xeneta. There is a spread of $9,300 between the highest and lowest rates being paid by shippers.

The average Asia–North Europe short-term rate is at $7,768 per TEU, more than nine times that of 2019, with a more than $4,000 per TEU spread between the upper and lower rates being paid by the market.

The culprit is demand outstripping supply, especially on the trans-Pacific, and severe congestion at ports in the US, Asia, and North Europe, combined with bottlenecks in inland logistics chains that are sucking capacity and equipment out of the major trades. This is pushing up spot rate levels and leaving carriers struggling to manage the excess volume.

“When you have thousands of clients in a crazy market like this, as a carrier you need to make very, very tough decisions on who to service at what point every single day, because some cargo will need to be rolled over and some cargo must be on the ship,” Sand told the BIMCO webinar.

The difficulties shippers face in securing space on vessels has prompted digital freight booking platform Freightos to offer its Guaranteed Container Capacity solution for importers and exporters. The feature will enable shippers of all sizes to book “well-priced, guaranteed container space” through logistics providers in Southeast Asia, according to Freightos.com CEO Ruthie Amaru.

Amaru said the first logistics provider to join the initiative was a major master loader based in Asia with capacity commitments secured in advance with carriers that offer services through Seabay, a forwarder in the Freightos.com marketplace.

“Demand outstripping supply is precisely why we felt like this service was so critical,” Amaru told JOC.com, adding that guaranteeing the capacity did not come with premium rate levels.

“Surprisingly, this doesn’t necessarily mean significantly higher prices than some other spot market prices,” she added. “There has always been a high variance in freight pricing across vendors. For example, our annual mystery shopping survey across top tier logistics providers typically finds close to a 70 percent spread in spot market prices.”

European carriers CMA CGM and Hapag-Lloyd announced recently they were suspending their spot rate increases, but an executive from a third carrier who asked not to be identified said this would have no effect on the market.

The executive told JOC.com this week that spot rates were “super important for revenue and profits” and for many of the carriers covered at least 30 percent of the total volume. “But these days we are 100 to 200 times overbooked, so it is simply not possible to take on more spot business anyway,” he said.

“The carriers that have suspended spot rate increases are not losing anything, and we think spot rates could still rise even further when you consider the high demand from the US and the congested ports in the Pacific and North Europe,” the source said.

How to Improve OTIF: 15 Tips for On Time and In Full Delivery
END_OF_DOCUMENT_TOKEN_TO_BE_REPLACED