Economists: US protectionism could tip world into recession

Economists: US protectionism could tip world into recession 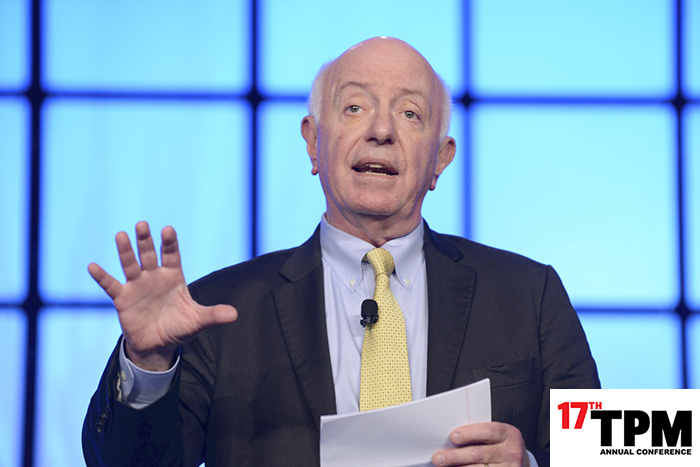 LONG BEACH, California — The global economy is facing two possible outcomes over the next year, and the worst case scenario would severely damage the economy, likely pitching it into a recession, two economists told the audience at JOC’s 17th Annual TPM Conference Monday.

Which of the scenarios prevails depends on the actions of President Donald Trump, and whether he follows through with campaign pledges to pull out of the North American Free Trade Agreement, place tariffs of up to 45 percent on Chinese imports, and institute a border adjustment tax on Mexican imports, Nariman Behravesh, IHS Markit chief economist, said.

“We are looking at the potential for policies that could do a lot of damage to shipping and trade in general,” he said. Behravesh and Mario Moreno, senior economist at IHS Markit, said Trump’s actions could disrupt the economy and send it into a recession.

Behravesh warned the audience of the economic damage that could result from the implementation of a border adjustment tax, or BAT. Trump has expressed a desire to introduce a BAT of 20 percent on imports from Mexico, believing it would slow the influx of imports from that country and encourage manufacturing in the United States.

But the burden of paying for the tax would fall on consumers, and the only winners would be large US businesses that export a lot, Behravesh said. Among the losers would be retailers, which import vast quantities of consumer goods, and refineries, which bring in raw materials, he said.

Behravesh said the paradox of the two potential economic outcomes is that the outlook for trade is at the moment good, with strong fundamentals underlying the US economy, and strong consumer, business, and investor optimism. The best scenario would be global economic growth of about 2.9 percent this year — the fastest in six years — and 2 percent to 2.5 percent gross domestic product growth in the United States, which is well above the 1.6 percent of 2016, he said.

A fiscal stimulus package of modest corporate tax cuts, modest personal tax cuts, some infrastructure spending of $25 to $30 billion a year — far lower than Trump seeks — and some rolling back of regulation would yield 2.8 percent growth in 2018, he said. Trade has the potential to grow at 5 to 6 percent a year, he said.

But the uncertainty is “huge,” and the pessimistic scenario, although less likely, could severely damage the US economy, Behravesh.

“Alternatively, you could have protectionist populism — trade war, mass deportations. That could kill the economy. It could trigger a recession in the United States,” Behravesh said.

Speaking on a subsequent panel that focused on the near future for container shipping, Moreno also offered a two-prong scenario, with a pessimistic view that would unfold if Trump pursued the most extreme trade policies.

Moreno predicted the United States could experience growth of 6 percent in container volume in 2017 to 21.8 million twenty-foot-equivalent units, if there were “no serious policy mistakes.” That would yield a 2.3 percent increase in GDP in 2017, a 2.7 percent hike in 2018, and 2.3 percent growth in 2019.

In a more “pessimistic” scenario, where Trump opts to “go very hard on Mexico, very hard on China,” the economy would enter a recession in the second and third quarters of 2018, he said.

“That recession would be triggered by strained relations with Mexico and China,” he said.