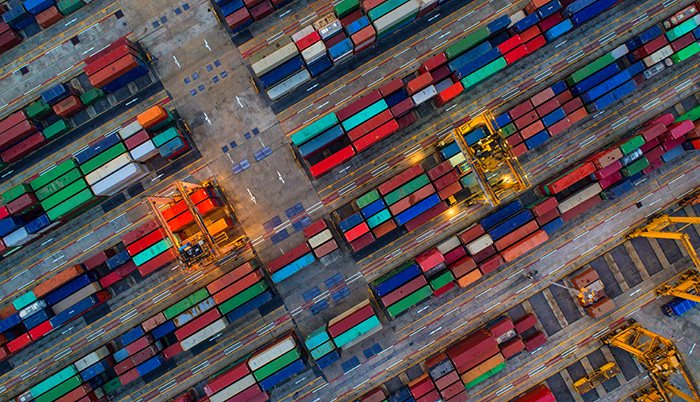 Low container shipping rates have helped offset the impact of a strong dollar for US exporters.

US containerized export growth decelerated quarter to quarter in the first three months of 2017, but rose 4.6 percent year over year, as demand offset a strong US dollar.

Quarter to quarter, US containerized exports contracted 1.1 percent, following a 6.8 percent year-over-year expansion in fourth-quarter 2016 that pulled full-year 2016 growth to 2.9 percent. The increase in exports in 2016 followed two straight years of declining exports, which fell 2.5 percent in 2015 and 2.3 percent in 2014, according to PIERS, a JOC.com sister product within IHS Markit. Containerized exports began 2016 on a similar note as 2017, increasing 4.3 percent over the first quarter of 2015.

The growth in US exports is continuing despite uncertainties over the direction of US trade policy, a strong dollar (which makes American commodities more costly overseas), and growing competition from agricultural producers in South America and the Black Sea region. The dollar, which has been relatively strong in recent years against major currencies from China, Japan, and the European Union, continues to edge higher, according to data from IHS Markit. The Chinese yuan went from 6.64 per dollar in 2016 to 6.98 this year; the Japanese yen jumped from 108.83 to 113.28, and the euro increased slightly from 0.9 to 0.92.

US commodity exports are competitive because farmers have lowered their prices in order to protect market share. “Everybody’s prices are low, but the playing field stays level,” said Dan Smith, a partner at the Tioga Group. Furthermore, ocean freight rates have dropped so low that they, in effect, negate the disadvantages of the strong dollar, he said.

One of the biggest advantages enjoyed by the US agricultural sector is Asia’s growing middle class, which is ramping up purchases of higher-value products such as identity-preserved grains, fruits, nuts, and meat products. Smith said blueberries, nuts, fruits, and West Coast apples are considered luxury items by China’s middle class consumers, “and people can afford them,” he said.

The Northwest Seaport Alliance of Seattle and Tacoma is well positioned to handle a variety of agricultural products such as apples, potatoes that are processed into french fries, hay, and  forest products, said Steve Balaski, senior business development manager. Although exporters say the strong dollar is a hurdle they must overcome, favorable freight rates in the westbound Pacific are helping to keep them competitive. Agricultural exports took off late last year and continued to grow through the winter months, he said.

Oakland is another example of a port that is benefitting from Asia’s growing appetite for quality US agricultural products. It is the closest port to growers of fruits and nuts in California’s Central Valley as well as winemakers in the Napa and Sonoma valleys. Agricultural export tonnage has grown 233 percent the past five years, and in late 2016, for the first time, agricultural exports surpassed the lower-rated commodities such as scrap metals and paper to account for more than 50 percent of all exports at the Northern California port.

Walter Kemmsies, managing director, economist, and chief strategist for the US ports, airports, and global infrastructure group at Jones Lang LaSalle, took personal delight in Oakland’s development because he has been predicting in recent years that demand from Asia’s consumers, who favor high-quality US food products, would eventually surpass the traditional exports of raw materials and scrap metals that are used as manufacturing inputs for Asia’s industrial sector. “Finally, we’re exporting more than scrap,” he said.

That is not to say that scrap products and other manufacturing inputs such as resins are losing their luster. According to PIERS, ingots, aluminum, and zinc exports increased 160 to 300 percent in 2016 from the previous year. Resins, which have always been a staple of petrochemical exporters in the Gulf region, increased 6.5 percent last year, and recent plant expansions in Texas and Louisiana bode well for continued growth of resin exports.

Kemmsies is also bullish on exports to Europe. He noted that the economy of the European Union grew faster than the US economy the past two quarters.That bodes well for East Coast ports and carriers because the East Coast is the main gateway to Europe just as West Coast ports are the largest gateway to Asia.

Exporters in the Midwest and West who ship to Asia have been somewhat sheltered from the effects of the strong dollar because freight rates in the westbound Pacific are just plain low.

“Fruits and nuts are $350 to $400 (per 40-foot container) to China base ports,” said Ed Zaninelli, president of Griffin Creek Consulting who managed the westbound trade for a number of years at Orient Overseas Container Line. “Wastepaper is moving for $300” from Oakland and Los Angeles-Long Beach, he said.

Exporters in the US interior are doing well on all-in transportation costs even with inland transportation included. “Chicago is $1,000 (per FEU) and it’s coming down to $800,” Zaninelli said. If exporters prefer to ship through the East Coast, that’s not a problem, either. “East Coast rates are worse, $350 to $400, and it’s going to get even worse with the bigger ships calling  there,” he said.

Nick Halper, director of exports at the Paper Tigers in Chicago, said scrap paper exports, although not as brisk as they were four to five years ago, are “relatively strong.” However, the biggest market, China, goes through periods of huge orders followed by a steep drop in demand for US product. “China is incredibly volatile,” he said. At present, inland transport capacity and container availability are adequate in the Midwest. “There’s not a lot to complain about,” Halper said.

Farmers in the Midwest and Upper Midwest, though, are complaining about the low commodity prices that have plagued their industry for the past two years, caused by bumper crops and growing competition, especially from Brazil, even as their export volumes remain strong. “It’s moving,” said Bruce Abbe, executive director of the Midwest Shippers Association. “That’s good for the shipping lines, but the agricultural community is hurting,” he said.

Exporters of dried distillers grain (DDG), a byproduct of ethanol production that is used extensively as animal feed, have been on a roller coaster ride in recent years due to anti-dumping and countervailing duty actions taken by the Chinese government. Renewable Fuels Association president Bob Dinneen, in testimony Thursday before the US Department of Commerce, said the layered duties of 10.7 to 33.8 percent are ravaging exports to what used to be the largest market for DDG exports. China accounted for 51 percent of US DDG exports in 2015, but by the end of 2016 China accounted for only 20 percent of DDG exports, he said.

Ports are doing their part to keep US exports competitive. They are expanding cold-storage facilities, as is occurring in Oakland, and the Northwest Seaport Alliance is investing in rail infrastructure to improve cargo flow to marine terminals.

The ports also stay in close touch with the western railroads, which provide an essential link from the interior to the seaports. Balaski noted that BNSF Railway has invested heavily in its northern corridor linking Seattle-Tacoma to the upper Midwest, which helps the Northwest Seaport Alliance to protect its market share in the face of stiff competition from the Canadian ports of Vancouver and Prince Rupert. “We obviously need competitive rail service and rates, and we’re working to help the railroads where we can,” he said.