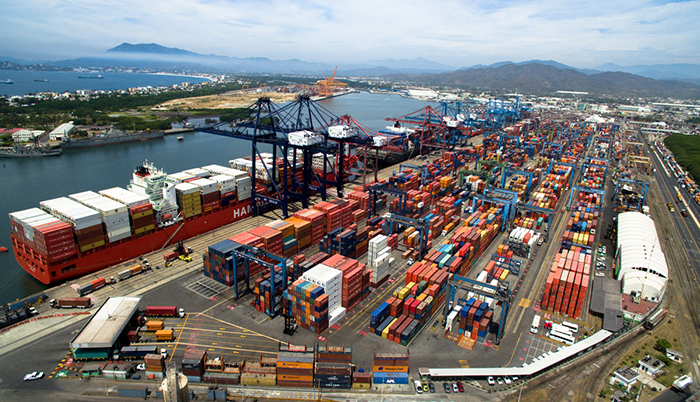 The project at the SSA Terminal in Manzanillo is one of several under way to expand port capacity in Mexico.

SSA Mexico will spend $50 million expanding by 30 percent its terminal in the Port of Manzanillo that is operating near capacity, eventually adding to competition for Pacific coast cargo recently heightened with the opening of a semi-automated terminal in nearby Lazaro Cardenas.

The SSA expansion, approved in a deal signed with Manzanillo port authorities about three weeks ago, will increase the capacity of the terminal, Mexico’s largest by container volume, from 1.8 million TEU to 2.1 million TEU, a hike of 17 percent, said Claudia Sanchez, a spokesperson for SSA Mexico, a subsidiary of Carrix.

The expansion will enable the terminal to add a fourth berth, increase the existing quayside by 300 meters (984 feet) to 1,350 meters, and boost the total terminal area by nearly 30 percent, to 82 acres, she said.

The terminal handled 1.6 million TEU in 2016 and is operating at about 85 percent capacity, Sanchez said. The expansion is designed to improve “efficiency and productivity,” enabling the the terminal to provide better client service while helping it handle the increased cargo volumes expected as a result of growing worldwide demand, she said.

“We will have better space for berthing and storage in our terminal and equipment,” she said.

The deal came about two months after the first ship arrived at APM Terminals’ new semi-automated terminal at Lazaro Cardenas, about 200 miles down the coast from Manzanillo. The second terminal at Manzanillo, operated by Philippines-based International Container Terminal Services, Inc., also is planning an expansion, adding 50,000 TEU to take it to 1 million TEU within the next two years, and doubling that by 2025.

Fortino Landeros, the terminal’s director general, said he did not see the expansions in Lazaro Cardenas and the other Manzanillo terminal having a significant impact on his own terminal’s volumes.

“No doubt, the opening of APMT in [Lazaro Cardenas], SSA´s expansion, plus the new shipping line alliances, will have an impact on volumes at Manzanillo,” Landero said in an email. He said that ICTSI expects it to be a “minor impact in volume,” and growth in the terminal would come to 15 percent year-over-year in 2017.

Lazaro Cardenas and Manzanillo, which have rail links and two container terminals, vie for the all-important consumer cargo headed for the Mexican capital and are gateways for imported parts bound for the country’s rapidly growing automobile industry in the center of the country.

The rise of the car manufacturing sector was a key reason behind an April 2015 pledge by the Mexican government to invest $5 billion in its network of 117 ports. Since then, the government has adjusted its plan, saying much of the funding will come from private sources.

Manzanillo, Mexico’s largest port, is close to completing a so-far three-year project to build a tunnel that will give freight trains 24-hour access to the port, and that the port authority expects will double the rail volume handled by the port. At present, trains are permitted to only enter the port four times a day because to get there they must pass through the city, causing disruption.

SSA’s expansion was enabled by federal rules approved in November that relieved a restriction, put in place when the nation’s ports were privatized in 1994, that prevented terminals from growing by more than 20 percent, Sanchez said. Once the new rules were published, SSA spent another six months reaching agreement on what expansion was permitted with the Manzanillo port authority, Administración Portuaria Integral de Manzanillo, she said.

The expansion includes two cranes that have already arrived at the port, and two more expected to be installed next year, both super post-Panamax cranes that can handle 24 containers across. Construction work to demolish warehouses and a conveyor belt on the area of expansion will begin in December, she said. The terminal, which has 10 shipping services, at present has a depth of 40 feet, and the port is working to deepen that to 46 feet, Sanchez said.